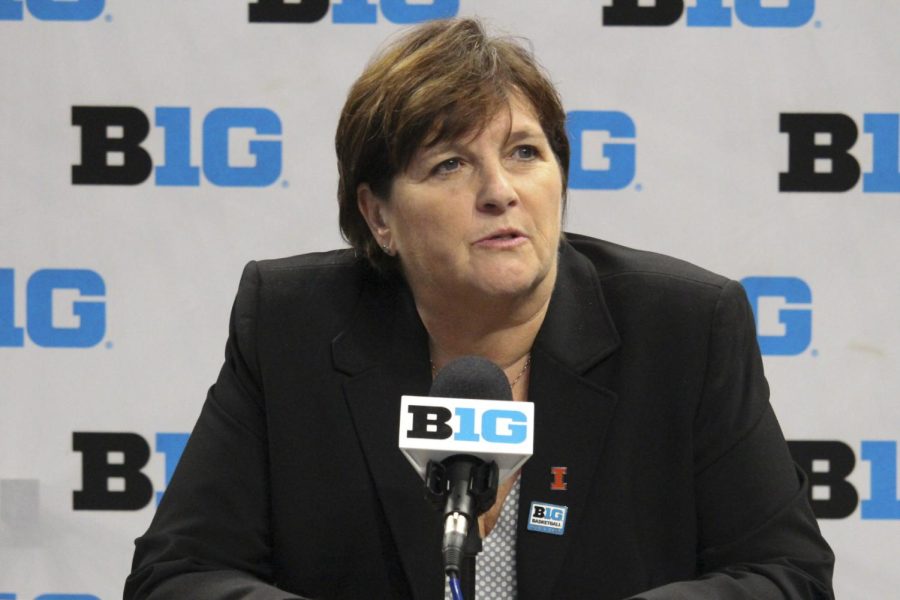 In the past year, the COVID-19 pandemic restricted a lot of team groupings outside of practice. For Illinois women’s basketball, it caused a dent in the team’s chemistry.

A week after the season ended in March, head coach Nancy Fahey reflected on her building of the program.

Chemistry is easy when there’s a professional coach and veterans on your court. It’s already there, pandemic or not.

But, for Fahey, who is still trying to build the program in her fifth year, the pandemic made the team vulnerable to a loss in chemistry.

As restrictions lessened and capacity limits went away, Fahey took advantage of the reopening and did as much she could to rebuild what was lost last season.

“When it could come back, I’m like embracing it like, ‘come here. I wanna give culture a big hug,’ and that’s what we did,” Fahey said.

With team trips to a Chicago Sky game, blind-folded painting and Chopped challenges are among the several ways the team has established bonds, trust and, of course, chemistry.

Fahey said that she didn’t see a point where everyone clicked but rather saw the synergy grow.

“It’s kinda like watching your kid grow. You stumble, ‘oh, that wasn’t a good day, we didn’t talk to each other as productive as we want,’” Fahey said. “We’re still working on it. We’ve talked almost every single day after practice, like how are we talking to each other? Can we be more efficient? Do you know each other? And so that’s part of the process. We’re far from done, but it’s a really good start. ”

Jada Peebles, Aaliyah Nye and Fahey have continually stressed that chemistry is a lot better on the team than last season.

Although there have been crucial player departures out of Illinois, the team still retained seven players and gained seven newcomers.

As it was not a big change to Peebles, she said the team bondings have helped make things easier when it came to the court.

To make the chemistry grow even more on and off the court, the coach and players have to have a base of trust and understanding for each other.

“That’s what I hope to have in the players and coaches,” Fahey said. “I coach from the heart, which doesn’t mean I’m not going to push you. That doesn’t mean you do not have time to go look at me like that.”

The Big Ten is what many of the coaches, both men’s and women’s, have called the best league to compete in. Intensity from all 14 teams makes every game competitive and the chance to grow after every one.

For Fahey, she’ll be looking for that growth every time her team competes.

“If you don’t (grow) and you go through the Big Ten, it’s going to be tough because there’s some very, very good teams,” Fahey said. “If you don’t have your shoulders back and ready and really looking out for each other, that’s what it shows when it’s stressful. And let’s face it, that’s when you’re gonna have to see that.”