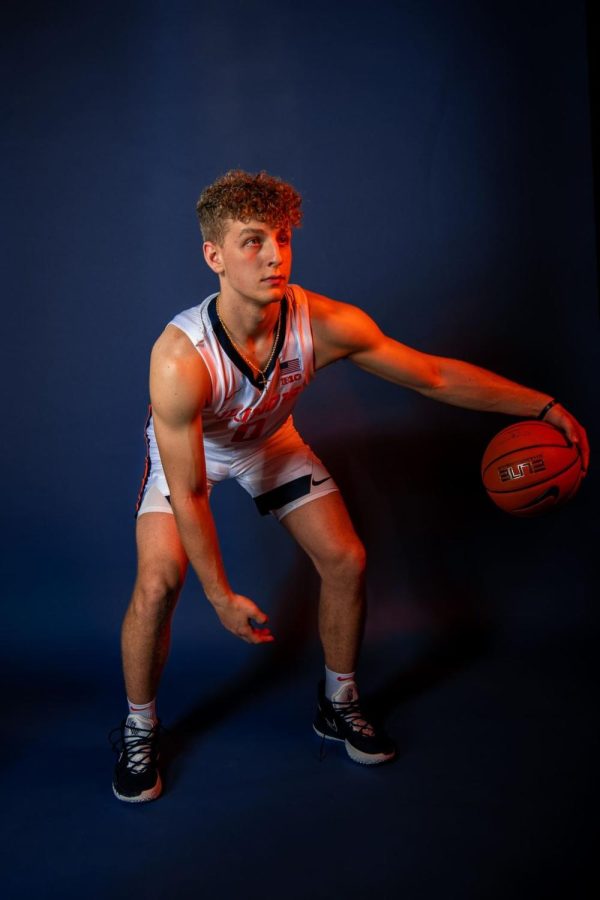 Freshman Brandin Podziemski poses during the team’s photo day. All three freshmen — Podziemski, Luke Goode and RJ Melendez — will look to establish themselves during their first college season.

Despite losing one of the best players in school history, the Illini enter this season with a roster that is deep with talent and experience. Hidden in the shadows of fan favorites like sophomore Andre Curbelo and junior Kofi Cockburn are three freshmen whose versatility speaks volumes to their potential.

Brandin Podziemski, Luke Goode and RJ Melendez are teenagers on a team with four 23-year-olds and a 24-year-old. They entered college after an unprecedented couple of seasons that saw countless games canceled and many other played without fans.

Like any freshmen, these three have yet to define their roles on the team, and due to the stockpile of experienced guys ahead of them, they may not get many chances. Regardless of what roles they find, we can expect that they won’t be “traditional.”

“The positions this year are really interchangeable, wherever they put me is where I’ll be,” Goode said. “I’m gonna go in and do my thing every day, help contribute to the team as much as possible and do whatever the coach has asked me to do.”

Goode, a Fort Wayne native who averaged 19 points per game during his senior year in high school, is listed at 6-foot-7 and appears to have more muscle than your average freshman. He’s a solid ball-handler who thrives on catch-and-shoot three-point attempts, and he can hit a one-dribble pull-up if his man bites on a pump fake.

In high school, Goode even showed the ability to hit step-back threes on occasion. He says he will likely be put “anywhere from the two to the four” this season, and it’s not surprising. In addition to shooting 40% from three, he also averaged 10 rebounds a game during his senior year.

The other 6-foot-7 “guard” on the team Ramses “RJ” Melendez. Melendez, like Goode, is a proficient from behind the arc. His ball-handling shows room for improvement, and he doesn’t have the weight to bang down low like Goode, but he makes up for it with explosiveness and touch around the rim.

In high school, Melendez showed craftiness with finger-rolls and a bevy of floater in his bag. He can also finish above the rim, making him a likely lob target for Curbelo to find on fast breaks. Though his thin frame may hold him back on defense, his touch from deep should win him some time to prove himself on the court.

Brandin Podziemski is the shortest freshman on the roster, but at 6-foot-5, he is far from a small guard. Podziemski appears to be one of the more polished offensive players on the team even as a freshman. In high school, he showed the ability to score inside and out, and because of that, he considers himself an “all-around” guy.

“I didn’t start playing basketball until eighth grade. And, at that point, I was one of the taller guys, so I played like Omar and Kofi’s position. I learned a bunch of footwork like that,” Podziemski said. “And then, as I grew older, I become more of a wing player. And then my last two years of high school, I became a point guard. So, I’ve done it. That’s why I say I can do everything.”

Head coach Brad Underwood believes Podziemski will play either point or shooting guard and that he “can become a good on-ball defender for (the Illini).” Podziemski envisions himself doing a little bit more, and it’s not hard to see why. In high school, he averaged 35 points, 10 rebounds, five assists and four steals during his senior year.

“I could play one through three. Whatever he needs, you know, I’m going to do,” Podziemski said, “I learned all the spots on the floor, just in case I’m put into that spot, so that’s what I’m here for.”

No one should expect any of these freshmen to score 20 points per game like they did in high school, not this year at least. They certainly have room to grow, but they also have veterans to learn from and time to do it.

“It’s really just kind of opens your eyes,” Goode said, “I mean, you come in as a freshman not know not knowing what to expect and you get guarded by Big Ten first team all-defensive guy [Fraizer], and then you run into a seven foot 300 pound guy [Cockburn] in the paint.”