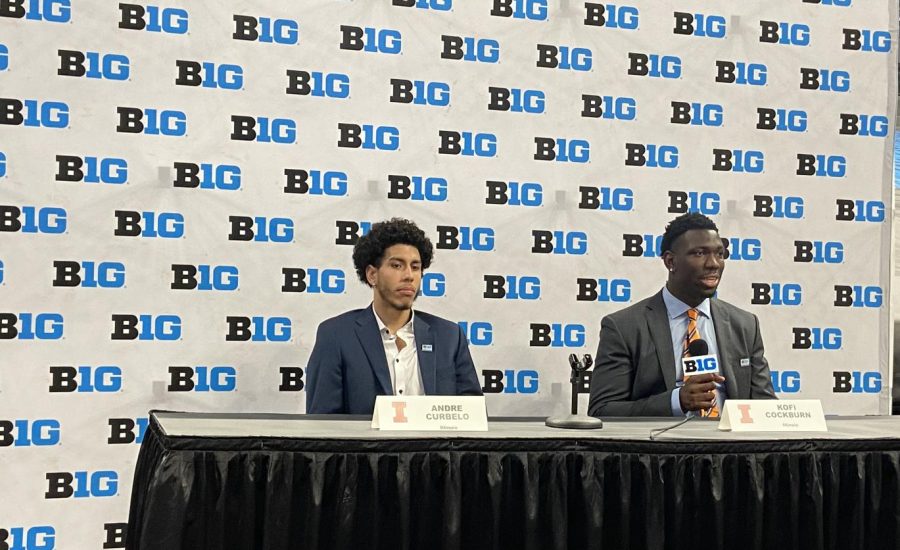 Andre Curbelo and Kofi Cockburn field questions during Big Ten Basketball Media Days at Gainbridge Fieldhouse in Indianapolis on Thursday. Curbelo will take on a bigger role for Illinois this season.

Andre Curbelo and Kofi Cockburn have a ton of eyes on them, and even more will come once the Illini start their season in three weeks. The duo has been deemed the faces of the program by fans and media alike, but whether they can fill the shoes left by Ayo Dosumnu remains to be seen.

“They expect a lot from me and the team,” Cockburn said, “We did a lot of good things last year. It’s just about building on those things, not making the same mistakes but getting better and better.”

For two seasons, Cockburn played one part of a dynamic duo with Dosunmu. The two All-Americans were nearly impossible to stop on the pick-and-roll. Dosunmu’s court vision allowed him to connect with Cockburn if he got open or find the open man if Cockburn was double-teamed, as he often was.

If defenses dared to give Dosunmu space, he would make them pay from midrange or deep, something Curbelo has yet to prove he is capable of in-game. Curbelo shot 16% on just 31 attempts from three last year. He rarely took jump shots outside of the paint. With a full offseason under his belt, some improvement is expected.

“He’s worked extremely hard on that. He’s a good shooter. He’s a guy that’s not a bad shooter, (but) he got off to a tough start,” head coach Brad Underwood said, “He’s got great form. He’ll be a guy who’s a very, very good shooter.”

If Underwood is wrong here, it could be a sign of trouble for the Illini, but there are reasons to believe improvement is likely. Indeed, Curbelo has good form and shot 73% from the free-throw line last year. While that number isn’t exciting, it does project that he could be at least a good 3-point shooter.

Where Curbelo shines is around 10-12 feet from the hoop. From this range, he possesses a lethal fadeaway jump shot that he can arc over taller defenders. Cockburn, on the other hand, has no offense outside of the paint, making it even more important for Curbelo to take that leap.

“I’m not worrying about that too much. No, being the guy of the program, you know, everybody matters,” Curbelo said, “I think it’s just about how I can impact my teammates’ lives and my teammates’ playing. That’s the most important thing to me.”

It’s clear that the idea of filling Dosunmu’s shoes has come from the outside. Within the team, the Illini have been consistent with their focus: the team around them. And that team is deep.

“We pretty much have three starting fives; I think we’re gonna be that good,” Curbelo said, “I’m not afraid to say we’re gonna be better than last year. Once we click and we do everything, we’re going to be pretty special. Like I said, just having so much depth is dangerous.”

When a team loses its best player, leader and closer, it’s nearly impossible to not get worse. Be it a testament to Underwood’s recruiting or the players’ hard work, probably a bit of both, but this team looks like it may actually be better. Only time will tell, but for now, we do know whose hands the ball will be in when the game is on the line.

“I think that Curbelo very easily could have been the MVP of the Big Ten tournament, the guy that hit big shots down the stretch in the semis and finals,” Underwood said, “I got a feeling he’s gonna have ample opportunities to have the ball in his hands. I think he’s got a really good supporting cast around him. He’ll just do it differently than Ayo; he did it with passes.”