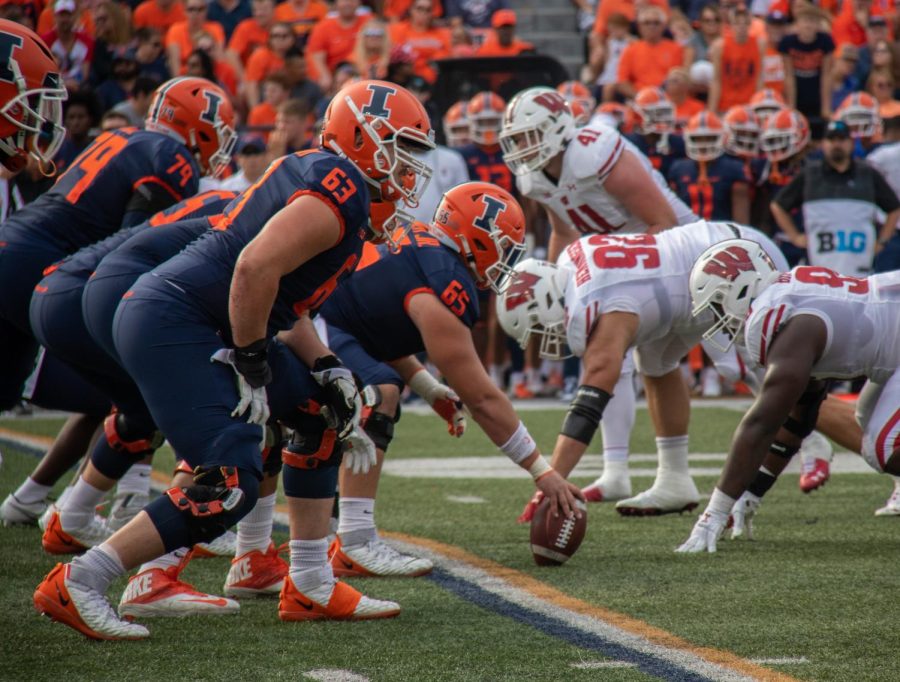 The Illinois offensive line gets ready to snap the ball during the Homecoming game against Wisconsin on Saturday. The Illini offense and defense struggled immensely throughout the team’s 24-0 loss to the Wisconsin Badgers.

The Badgers took control from the beginning against the Illini on Saturday, dominating from start to finish en route to a 24-0 victory.

Looking as healthy as it has all season and coming off a 24-14 victory over Charlotte, Illinois had hopes of stealing a victory over a Wisconsin team whose offense had been struggling all year.

That wasn’t the case.

The Illini couldn’t get anything going on offense, didn’t stop the Badger running game and ultimately got killed at home.

Illinois does not have a surefire starter in any way, shape or form. Brandon Peters had struggled coming into the game, and Saturday was no different. Before getting injured, Peters was 3-for-7 on passing for 12 yards.

Sitkowski came in to replace him and had played well when on the field this season, but he was barely better. He started 0-for-12 and finished with well under 100 yards and a passing percentage of well below 50%.

Maybe it’s not time yet to start looking toward next year, but as of now, the Illini have no one under center to feel good about. Art seems to be struggling, so if he doesn’t have a miracle second half of the season, it’s back to the transfer portal for the coaching staff.

After a very high defensive grade last week against Charlotte, the Illinois defensive line looked awful against Wisconsin. The Badger offense succeeds when their rush game plays well, and the Illini let them do whatever they wanted.

Wisconsin finished with 390 yards on the ground and three touchdowns. To give credit where it’s deserved, Wisconsin has a really good offensive line and a good running back group that has multiple guys capable of doing damage.

But, the Illinois defensive line looked uncompetitive in the rush game and gave Graham Mertz time to throw. They looked nothing like they had in the weeks leading up to the game.

There isn’t much to say here.

There was little passing game. Chase Brown had one good run for a first down. The offensive line struggled to stop the Wisconsin defensive line. They didn’t get going at all.

Yes, the Badgers have one of the best run defenses in the country, and that’s where Illinois gets yardage. But, zero points and less than a hundred yards of total offense is terrible.

Figure something out, Tony Petersen, or else changes may be made sooner than we initially thought.

This grade isn’t lower because Illinois forced two turnovers and Wisconsin didn’t score on every possession. In fact, there were a couple three-and-outs.

But, their inability to stop the running game and put pressure on Graham Mertz was awful. I get that the talent isn’t there, but this grade doesn’t take that into account. Ugly performance.

Blake Hayes had a couple good punts, and he’s the best player on the team and the best punter in the country.