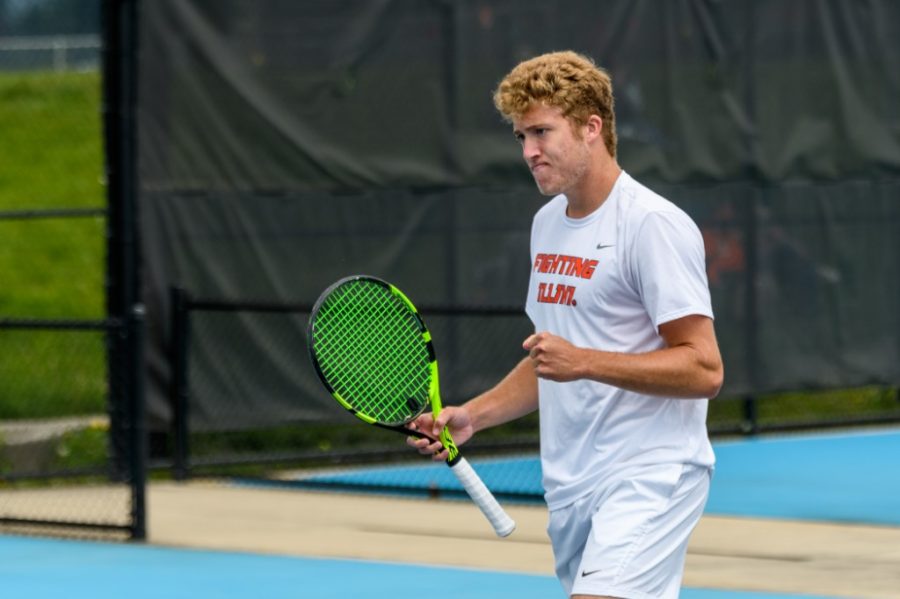 Graduate student Alex Brown celebrates after a play against Notre Dame on May 8. Brown recently bowed out of the ITA All-American Championships early for Illinois men’s tennis.

Illinois men’s tennis’ week was cut short at the ITA Men’s All-American Championships in Tulsa, Oklahoma, when graduate student Alex Brown was knocked out of the competition after two matches in the men’s singles qualifying bracket.

Brown began his tournament facing off against Virginia’s Chris Rodesch in the round of 256 of the qualifying bracket. Rodesch proved to be a tough opponent for Brown, with the Cavalier sophomore winning the match, 6-4 and 6-1. With this early loss, Brown dropped from the qualifying bracket to the qualifying consolation bracket, where he was among 63 other competitors looking to redeem their early tournament defeats.

In the round of 64 of the qualifying consolation bracket, Brown looked to rebound from his earlier defeat with his next match against Florida Gulf Coast University’s Magnus Johnson. Brown was denied his chance at redemption as Johnson won the match convincingly, taking both sets, 6-0 and 6-2. Johnson’s victory saw Brown knocked out of the tournament on Tuesday before the tournament’s main draw.

Unable to achieve a better result than his last performance at the ITA Men’s All-American Championships in 2019, Brown and his teammates have no choice but to look ahead to the Fighting Illini Invite this next week when the team as a whole can seek to build on a promising start to the season.