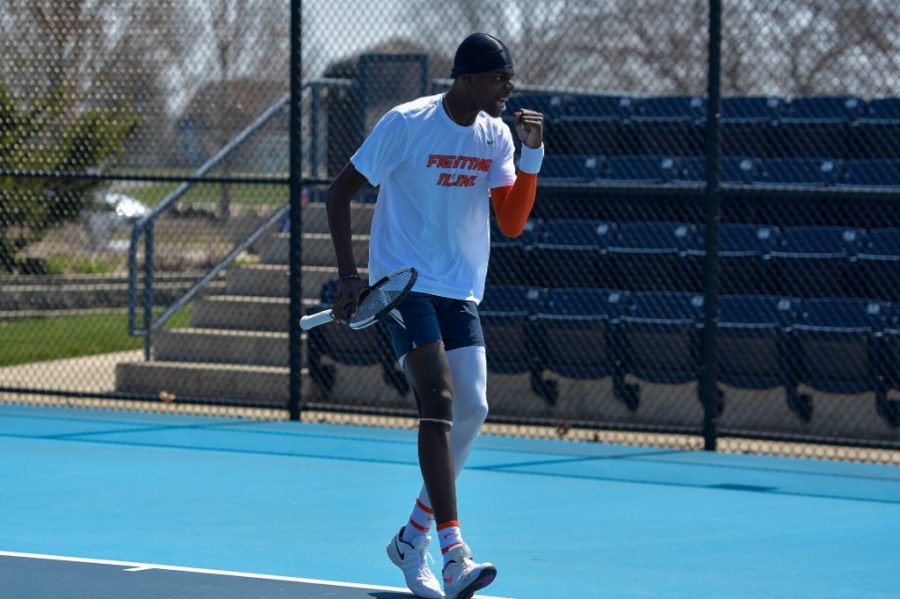 Senior Kweisi Kenyatte celebrates scoring during a match against Minnesota April 4. Kenyatte came to Illinois to get bigger opportunities than what was being offered beforehand.

Kweisi Kenyatte was grateful for the opportunity, but he wanted a change of scenery. After two seasons at Valparaiso University, Kenyatte left the school and opened up recruiting, looking to transfer elsewhere. Staying at his home in Detroit, Michigan, an injured Kenyatte received a call from his potential new head coach.

Minutes later, Dancer, who hails from the state of Michigan, pulled up Kenyatte’s home to check up on his injured recruit.

“He has a very good moral compass,” Kenyatte said. “He treats us like he is our father.”

With only one season left to go, Kenyatte and Dancer look to contend for another Big Ten Championship while also preparing the Detroit native for a professional career.

Kenyatte is large. Standing at 6-foot-8, he’s one of the tallest players in the nation, but he hasn’t been fully able to shine because of external circumstances. After excelling at Valparaiso, Kenyatte was forced to sit out two seasons ago because of transfer rules and was only given a handful of games last season because of the COVID-19 pandemic.

At Valparaiso, he was one of the top athletes in the conference, finishing with a singles record of 21-5 and a doubles record of 19-7 during his sophomore season.

He liked the success, but he felt that he was limiting himself. Valparaiso, with a student body of 3,170 undergraduates, didn’t give him the opportunity to be around like-minded people. Kenyatte is ambitious, and his teammates were not, according to him. Staying at the same campus — which only takes 15 minutes to circulate — wasn’t in the cards.

Kenyatte wanted a professional career, and he knew that the Indiana school handcuffed those chances. Instead of waiting for others to take notice of him, Kenyatte was the one who called Illinois and Dancer. The head coach, who had followed Kenyatte since juniors, was impressed by his sophomore collegiate season and offered him a spot on the Big Ten roster.

“We share a bond of being Michigan people,” Dancer said. “I wish he liked the Lions more, but any time you are from the same home state it doesn’t hurt. But let’s not kid ourselves, our backgrounds were very different.”

Dancer, a graduate of Michigan State, was born in Coldwater, Michigan, a small town near the border of Indiana. Kenyatte, from Detroit, was able to go to East English Village Preparatory, which helped lead him to collegiate tennis.

After two seasons in Champaign, Kenyatte holds an overall record of 6-6 in singles and 4-5 in doubles. While COVID-19 slowed down his transition to Big Ten competition, Kenyatte isn’t bitter. While Ivy League programs had the entire season canceled, Kenyatte said he was fortunate to receive any sort of a season.

Even with the COVID-19 restrictions, Kenyatte still had access to facilities that Valparaiso could never offer, especially when it came to Illinois’ Atkins Tennis Center.

“We shared a little clubhouse with the men and women (at Valparaiso),” Kenyatte said. “It was cute, and it was what we had, but here it is so much bigger.”

Coming off a Big Ten championship, Dancer has to replace the production from four seniors, and he’ll also need Kenyatte to contribute more. But Kenyatte is currently ill from pneumonia, which has sidelined him for multiple weeks.

While the Valporasio transfer is resting in preparation for the biggest season of his career, Dancer has continually checked up on his player with FaceTimes and text messages.

“He’s a guy I would invite to my wedding,” Kenyatte said.