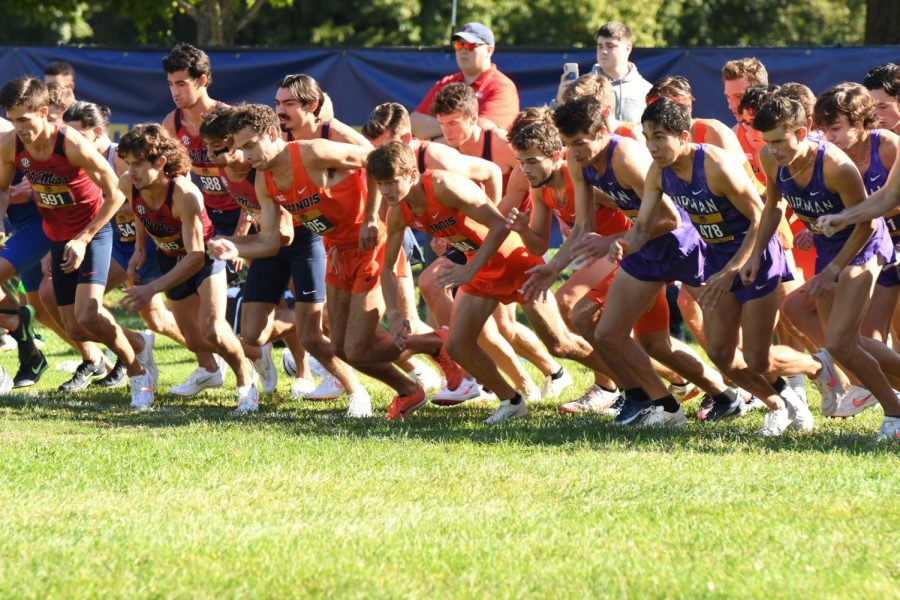 Jon Davis and Tyler Cushing begin their run at the Joe Pian Invitational on Oct. 1. Sophomores hope to make a big impact this season despite limited experience.

Last year, the COVID-19 pandemic shortened seasons for many sports, and the aftermath is still being felt across every program.

Many athletes are still trying to make up for that lost time, and the Illini cross country team’s sophomore class is a perfect example.

They’ve had very limited running experience so far during their time with the program, but they continue to be resilient with their fight to overcome that adversity and have recently found success in doing so.

At the team’s most recent meet, the Joe Piane Invite at Notre Dame, all four sophomore runners made an impact during their races to help the Illini place 20th overall.

Sophomore Tyler Cushing shared that it was very troubling during his freshman year without having any idea if he was going to be able to compete.

It wasn’t until January of his freshman year that he finally got his opportunity to compete in first collegiate race, which happened to be the Big Ten Championships with a lot of strong competition.

Cushing shared how valuable those initial races were, but he also mentioned how difficult it was to enter this year without much experience competing in long distance events.

“It hasn’t been easy,” Cushing said. “My last race was the third 8k I’ve ever ran, and usually I’d have a whole season under my belt by this time, so I’m still learning how to run that distance and perfect it.”

Regardless, Cushing managed to place 57th with a time of 24:37.1 as the Illini’s second runner to finish the men’s 5-mile event, which helped the team place 20th overall on Oct. 1 in South Bend, Indiana.

Cushing credits the years of experience that the coaches and the leaders of his team, like graduate student Jon Davis and redshirt senior Irwin Loud, have as one of the biggest keys to his success this season.

“They’ve talked me through how to feel, what to do and they’ve planned my training around what an 8k should feel like and the decisions that I should make,” Cushing said. “You’re always going to hurt while running an 8k, but it’s all about learning how to deal with that pain and fighting through it.”

Another sophomore, Anthony Maida, also finished as the Illini’s second runner during the men’s open 5-mile with a 51st-place finish and a time of 26:24.5.

Ben Giblin agreed that many leaders on the team have shared very valuable lessons with him that’s helped his development, such as being able to focus on racing without any fear, which is a mentality that has made this season’s races much easier.

“It definitely was a hurdle coming in and starting the season with only one race under our belt,” Giblin said. “But I think we’ve handled it pretty well so far. The coaches know what they’re doing and have made it as easy as possible for us.”

Cushing praised the sophomore class for being able to stick together throughout all the adversity they’ve faced in the last season and a half.

“We weren’t just teammates,” Cushing said. “We became pretty good friends, and I feel like that helped us get through a lot since there were a lot of races where we didn’t do too well. We would always continue to focus on the next one together.”

Giblin agreed that it is nice to have “someone who is in the exact same situation as you.”

“It’s good to have someone else you can depend on,” Giblin said.

Looking forward to the remainder of the season, Cushing shared how important head coach Sarah Haveman has been in getting the sophomore class up to speed and helping them overcome all their challenges.

“She really gave the sophomore class a lot of attention and the focus that we needed,” Cushing said. “We were coming into this not knowing what to expect, and she was responsive and adaptive. I feel like her flexibility is one of her biggest strengths.”

The Illini cross country team will be heading to Tallahassee, Florida for the NCAA Pre-Nationals.

Cushing knows a lot of good competition will be at this meet, but he also knows his team has the potential to return to the NCAA Regional competition just like they did the year before he joined the program.

“The experience as a team has set us back a little bit, but there is a lot of potential to grow, and we’re definitely growing,” Cushing said.