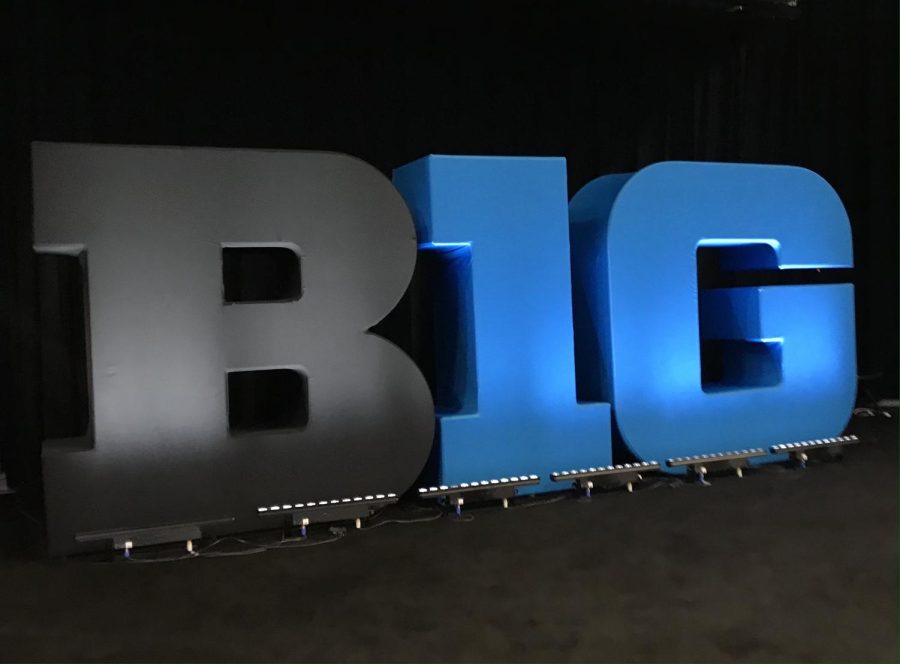 The Big Ten logo at the conference’s media days on Thursday in Gainbridge Fieldhouse in Indianapolis. Some of the biggest talking points at the event were the equity for men’s and women’s basketball, new opportunities through NIL and transfer rules and Michigan and Illinois basketball’s rivalry.

Last Thursday, the Big Ten hosted day one of its basketball media days, where players and coaches from seven Big Ten schools, including Illinois, gathered to discuss the upcoming season. After an offseason where the landscape of college sports changed drastically, there was a lot to talk about. Here are some important takeaways.

Player independence at an all-time high

In April, the NCAA changed its rules regarding the transfer process, now allowing athletes to transfer schools without sitting out a year of competition. Then, in June, the NCAA announced it would allow players to profit off their name, image and likeness.

This is a stark change from the NCAA of just three years ago, when coaches could control where athletes transferred, and athletes couldn’t make money without forfeiting their eligibility.

Payne and Plummer will have drastically different transfer experiences from graduate student Austin Hutcherson. Hutcherson sat out a season after transferring to Illinois in 2019 and injured his back in 2020 and sat out another year. Hutcherson is now two years removed from playing meaningful basketball, and that’s partly the fault of the old transfer rules.

“These two things (NIL and transfer rules) are going to be a game changer for us as Rutgers, because we believe that with New York and the opportunity that our players have with different corporate companies, that we can be very successful with this.”

The Illini have several players with enough name recognition to warrant sponsorships, and head coach Brad Underwood has given them the green light to handle business as they see fit.

“Athletes are really appreciative of this opportunity all over the world,” said junior Kofi Cockburn, “I try to let my agent handle all of that … for us and Coach, it’s about doing what we do best.”

Inclusivity and the focus on the women’s game

Last year, the NCAA faced backlash as complaints piled up, calling out the lack of funds and attention it paid to the women’s basketball tournament and women’s sports in general. This year, the Big Ten decided to feature both men’s and women’s teams at its basketball media days. In contrast, the University of Illinois featured only men’s basketball players at its program’s media day.

This is another stark change in the way things have been done in college sports. Big Ten commissioner Kevin Warren opened Media Days with a speech about inclusivity. Warren said that he wants the Big Ten conference to look “like the United Nations.”

He also said the new NIL rules played a part in the decision to include the women in media days, doing so would allow them the opportunity to grow their brand on the same stage as the men. In addition, Warren announced that the Big Ten is in the process of hiring a new vice president for women’s basketball, who will lead efforts related to women’s basketball.

“We will continually be leaders in the industry to promote diversity, equity and inclusion, from a race standpoint, a gender standpoint and sexual orientation,” Warren said. “We will create an environment that’s inclusive and will empower every person to have an opportunity to be successful in the Big Ten Conference.”

Illinois women’s head coach Nancy Fahey spoke about the importance of the event to her and her players.

“I wish you could have saw my players’ eyes when we walked in here,” Fahey said. “I want to say thank you to you. Driving up here with my players, they’re talking about the WNBA, what is this going to be really like ‘Coach, we don’t know what this is.’ Putting women in this situation, they get an opportunity to talk about basketball, it’s created jobs, it’s created a future. More importantly, what the game has given back to women is an opportunity to grow in places that we just didn’t really have.”

The media attempts to create beef where it does not exist

While hanging around the scrum that developed around Kofi Cockburn and sophomore Andre Curbelo, I witnessed what many despise about sports journalism. As I tried for the fifth or six time to ask a question, I heard hurried footsteps approaching behind me. The unseen reporter was able to quickly insert his own question which he directed at both Cockburn and Curbelo.

“Some other teams in this league said they don’t like you very much,” he said. “How do you view being that team to maybe ruffle some feathers a little bit?”

Immediately, Curbelo looked to his right where two Michigan players, sophomore Hunter Dickinson and senior Eli Brooks, were answering questions of their own. Cockburn was the first to speak up.

“We love it, man,” Cockburn said. “It means we’re doing something good. We don’t accept negative energy, we strive to stay positive to each other, we look out for each other. At the end of the day, it’s us against everybody else.”

The Illini stayed professional, neither Cockburn or Curbelo tried to retaliate, yet one of the bigger stories to come out of Big Ten Media Days was about the ongoing rivalry between Michigan and Illinois.

Despite what the unnamed reporter labeled “chippiness” and “ruffled feathers” between players, there is little evidence that points toward animosity between the players themselves. In fact, Dickinson, who the unnamed reporter paraphrased without attribution, never mentioned any hard feeling toward the Illinois coaches or players.

“I don’t mind being hated by opposing fans; that’s kinda how it’s supposed to be,” Dickinson said. “You can respect me, I’ll take that. I don’t want you to cheer for me as an opposing team; that’s what my fans are for. I can play with fans booing me; I don’t really care, I actually like it.”

Dickinson added that Illini fans are “kind of annoying” and said that he often tweets things just to get them riled up. He also praised the Illini players and coaches for their recent success. That’s far from what the reporter called “ruffled feathers.”

The Illini defeated Michigan in two close games last season and were set to meet the Wolverines in the Big Ten tournament championship game before Michigan was upset by the Ohio State Buckeyes.

Michigan and Illinois will face off again at State Farm Center on Jan. 14. This game will feature two of the top basketball programs in the country, which happen to be in the same historic conference.