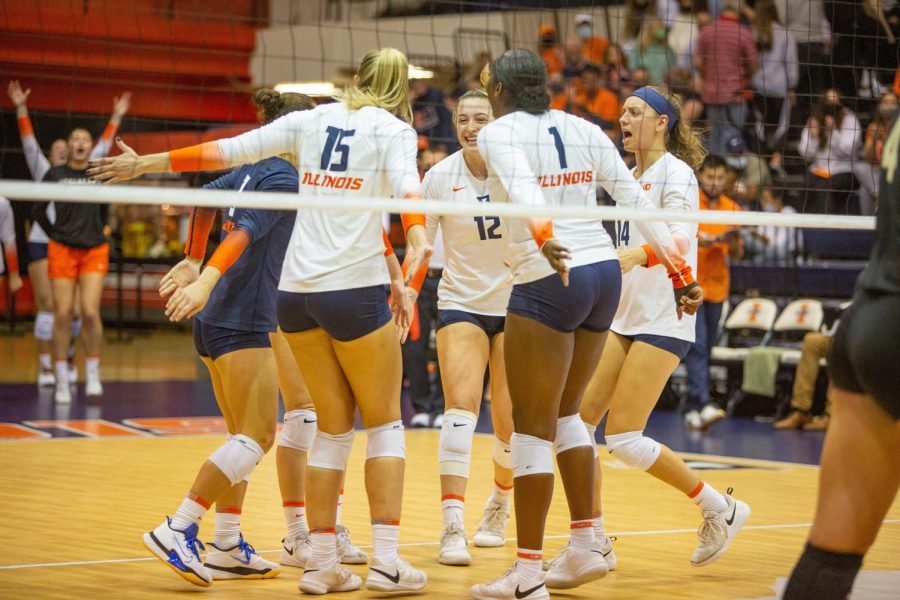 Illinois celebrates during the match against Purdue on Oct. 6. The Illini beat the Iowa Hawkeyes in straight sets on Wednesday to snap the team’s three-match losing streak.

“Of course it’s great whenever you can get a win in our conference,” said head coach Chris Tamas. “We did played two weeks ago, two and a half weeks ago and got pushed to the brink in five sets, so it’s good to come out and take care of business in three. They had a good run on us in the third set, but I was happy with our response.”

Illinois dominated the first set from start to finish, with two big runs of 9-1 and 10-1 to take the first set of the match. Trailing at one point 8-6, the Illini only allowed four points from that moment forward, going on a 19-4 run to close the frame. Junior middle blocker Kennedy Collins registered five total blocks in the set, while graduate student outside hitter Megan Cooney and sophomore outside hitter Raina Terry both had an ace in the frame. Six different Illini registered at least one kill in the set, with Illinois taking the opening frame, 25-12.

Collins says her blocking abilities at the net weren’t her strongest attributes coming into the season, though she feels that has now become a significant part of her game and has helped shape her role on the team.

“I think blocking is a huge part of the game,” Collins said. “At the beginning of the season, it wasn’t my strong suit. Just focusing on that I think is helping now.”

The second set was a bit more back and forth, though once the match was tied at 9-9, the Illini pulled away after going on a 6-2 run, sparked by three Iowa errors, two kills from junior outside hitter Jessica Nunge and a kill from Collins. Leading by as many as five in the set, Illinois never let Iowa cut its deficit to fewer than two points, and the Illini sealed the point on a kill from junior middle blocker Kyla Swanson to win the set, 25-20.

Iowa, looking to avoid the sweep, jumped out to an 11-4 lead in the third set. The Illini didn’t let that last long, as they immediately went on a 7-0 run to tie the set at 11. Two aces from redshirt junior Diana Brown, kills from Cooney, Nunge and Swanson and a block from Cooney and Swanson kickstarted the big turnaround.

“I think we just came in the middle at one point, and we just had the mindset to just go for it,” Terry said. “And that’s exactly what we did.”

The Illini went on another big streak, this time going on a 8-1 run to jump out to a six-point lead. Though Iowa was able to fight off three match points, Swanson sealed the sweep with another kill, her eighth of the night.

Illinois was led by Nunge, who registered nine kills on a .391 hitting percentage, and Terry, who notched nine kills, seven digs, two aces and two blocks. Defensively, the Illini were led by Collins, who finished with seven total blocks, including one solo, and senior defensive specialist Taylor Kuper’s 14 digs.

“It was very refreshing, for our bodies, for our minds, for everything,” Collins said. “Five-setters are tough, so it was good to pull it out in three.”

Illinois improves to 12-6 overall and 4-3 in Big Ten play with the win, and it will travel to Lincoln to take on No. 9 Nebraska, which is undefeated in conference action thus far this season.