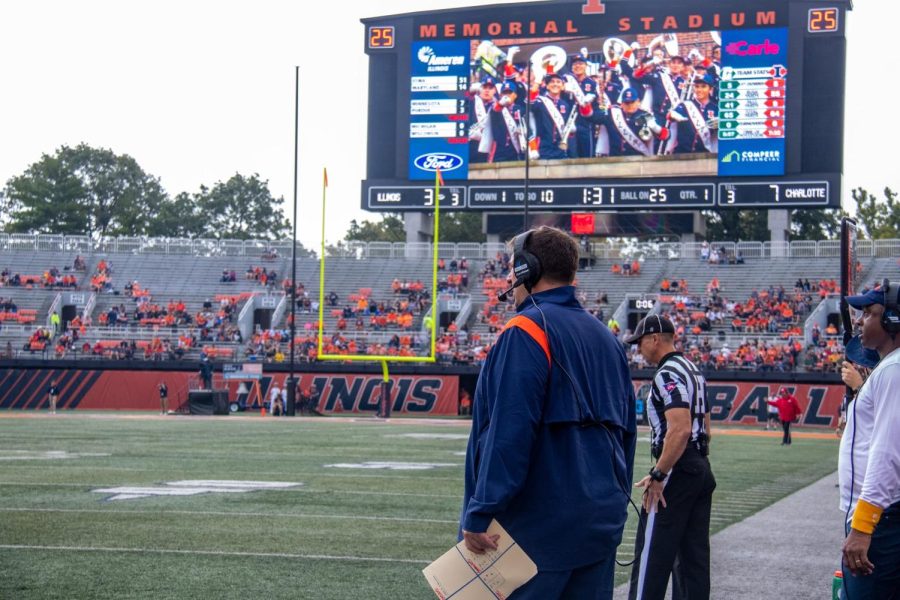 Bret Bielema stands on the sidelines during a football game against Charlotte on Oct. 2. Bielema has great facilities to use to improve the team as he sees he has a long road ahead of him.

Call me crazy, but I’m a believer in Illini football. People want to believe that getting six wins a year means we should build a statue for that coach. That’s nonsense.

I believe it’s fair to say Ron Zook’s tenure ended in disappointing fashion and that he was never really a great head coach — as he also was fired at Florida despite loads of talent. However, despite all of the grievances, Zook ended his tenure with back-to-back bowl appearances.

Nobody thought Tim Beckman had the right mentality to lead the Illini. He embarrassed himself at Big Ten Media Days while discussing what “Oskee-Wow-Wow” means to him. He embarrassed the entire program when he was fired for player misconduct. However, despite all of the grievances, he ended his tenure with a bowl appearance.

Lovie Smith helped establish some credibility to the program, but people were regularly disappointed with the results. I visited Illinois’ campus during the 63-0 loss to Iowa, which almost made me go to Michigan State for my college education instead. However, despite all of the grievances, Smith likely would’ve ended his tenure with back-to-back bowls if COVID-19 wasn’t a thing.

The season is halfway done, and Bielema has reestablished smash-mouth football to the Illini program, and it has worked — against lesser competition. But against the cream of the crop — i.e. Wisconsin, Iowa, Penn State, etc. — Bielema will have to revamp the air attack and open up the offense to avoid mediocrity.

The passing game has been poor all season, but Illinois should still be 3-1 in conference play. People would like to say that smash-mouth offense is the reason why Illinois played close with Maryland and Purdue. No, they actually played close because they have roughly the same talent and because Maryland isn’t a great program either.

Maryland has given up 51 points to Iowa and 66 points to Ohio State in the last two weeks, but Illinois could only score 17 points, seven of which came from a scoop-and-score fumble.

Purdue will finish no better than 6-6 this season. For how bad Illinois was in 2020, they nearly knocked off the Boilermakers with a fourth-string quarterback, Coran Taylor, who committed four turnovers. And, in 2021, Illinois likely wins if it doesn’t punt the ball away on fourth-and-2.

Illinois, despite all of the grievances, is literally a consistent bowl contender- if they just played a tad more competently. But doesn’t that prove how low the bar is to win just six games? The fact that Illini fans hated Zook, Beckman and Smith and they still made bowl games by the end of their tenures says something about the program.

Bielema is given something that Zook and Beckman didn’t have the luxury of: a great athletic director and great facilities. Bielema will be given more than enough time to craft his program as this is Whitman’s second hire.

Bielema also is given the luxury of Duke and Kansas being the toughest non-conference opponents from 2023-2025, which will allow him to start 3-0 every season. That’s three conference wins short of a bowl game, and he gets to try to accomplish that feat in the weaker Big Ten division.

I’m expecting Bielema to go to bowl games regularly, just like how Minnesota, Rutgers and Indiana expect the same from their head coaches. But even with the awful offenses, the awful head coaches and the awful recruiting, Illinois is pretty much there. What I want is to take it to the next level, which can be achieved by opening up this offensive.

Wisconsin, which has a top defense in the nation, has lost three times this season with Penn State, Notre Dame and Michigan all coming out on top. But, the reason the defense gave up points was because of a rushing attack from the opposition. It was because each of those teams passed for at least 239 yards through the air.

Illinois, however, against Wisconsin, couldn’t even manage 100 total yards of offense. The wide receivers couldn’t create separation. The line couldn’t protect the quarterback. Also, the quarterbacks had tunnel vision and couldn’t read the field.

This created a J.V. vs varsity feel as the Badgers controlled the narrative. They had the luxury of just running the ball with superior talent because they knew Illinois couldn’t pick up a first down through the air.

Against the Charlotte 49ers, you can run the ball whenever you feel like because you know you are faster and stronger. But, for Illinois, that’s how the Badgers treat them, and it can suck the life out of the game. Trying to out-smashmouth Wisconsin is a fool’s errand, as it has had a 30-year head start on the Illini.

The Illini need to realize that college football is a new man’s game. Playmaking quarterbacks are the key for struggling to take the next level. Sure, Brandon Peters can play well against Nebraska when his offense rushes for 280 yards. But he can’t do anything once Northwestern shuts down Chase Brown and company.

After this season, Peters is gone, and the portal will be wide open for a quarterback. But I hope Bielema realizes that he may need to leave his comfort zone and get a playmaker who can help patch Illinois’ holes. What’s the point of a big pocket passer if his line can’t protect him, the running game can be stopped and his wide receivers can’t get open.

The Bielema era hasn’t been bad whatsoever. Sure, the Maryland and Purdue games would’ve been nice to win, but it won’t derail the program. With our eyes closed, Illinois can flirt with six wins. Literally every program in the Big Ten does.

It’s time for Illinois to realize its worth, and that should be seven to eight wins a year. You’re the state school, you’re in the West Division and the facilities are elite. Keep the defensive approach, open up the offense so you can compete against Wisconsin and bowl games will be a given in Champaign.

If Zook, Beckman and Smith can end the tenures with bowl status, Bielema surely can. But let’s not call it a great day when Illinois plays Central Michigan in the Quick Lane Bowl in Detroit. If Northwestern can play in New Year’s Day Bowls in Florida, the Illini need to as well. Minor changes just need to be made.

Big Ten football has a reputation for smash-mouth football, and Bret Bielema has played a role in enhancing that role. His Wisconsin days — which included numerous NFL running backs — are well documented, and the beginning of the Illini era point to wanting to recreate that.

While Purdue and Maryland resulted in disappointing losses, the foundation of Illinois’ smashmouth approach was firm. Freshman Josh McCray was breaking through tackles, Luke Ford was catching passes and the offense didn’t commit numerous turnovers. But the Wisconsin game showed that Bielema has a long way to go before he can truly compete against above-average teams in the conference.