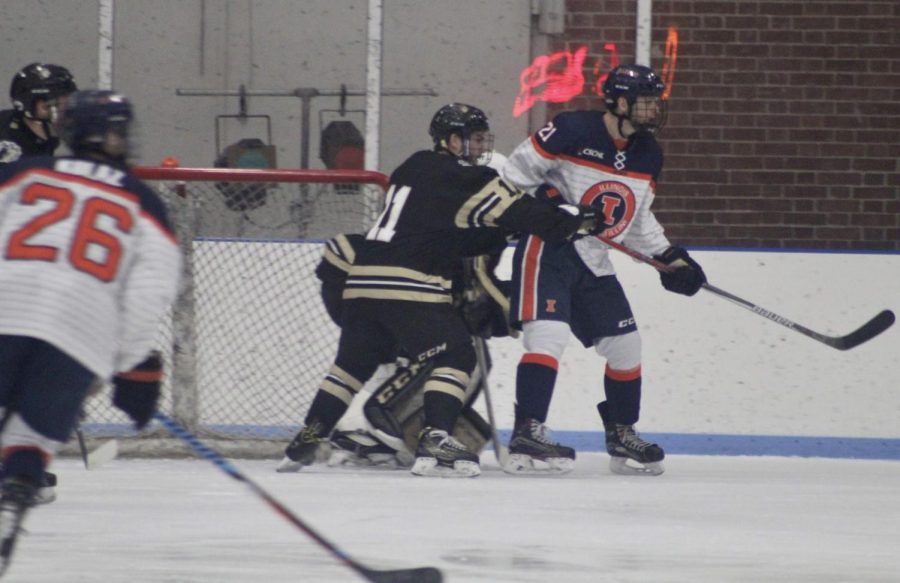 Illinois forward Kacper Ryba attempts to keep the puck from a Lindenwood player during the Illinois vs. Lindenwood game at the University of Illinois Ice Arena on Jan. 18. The Illini lost 2-1.

Kacper Ryba was a freshman who initially was just trying to impress in tryouts for the Illini Club Hockey Team.

“I just wanted to make it,” Ryba said. “I was worried night after night about getting a spot.”

During tryouts, Ryba began to closely connect with junior Bobby Ernsting as well as other prominent members of the team. When the chemistry in practices began to show, Ryba’s inclusion on the roster became a no-brainer.

With one semester now fully under his belt, Ryba has emerged as one of the Illini’s most reliable players. He leads all goal-scorers for Illinois this season, sinking 13 pucks into the back of opposing goalies’ nets and had a hand in helping his teammates with nine assists.

“(Ryba’s) done a nice job of finding ways to come and contribute as an 18-year old freshman, which definitely isn’t the easiest thing to do on any level of college, ACHA included,” said head coach Nick Fabbrini.

Prior to his time playing at Illinois, Ryba played hockey for seven years. By high school, he was making four three-hour round trips from his home in Coal Valley to Chicago and back to practice every week.

“I’d been so used to that, that balancing the school and hockey wasn’t really a big deal here,” Ryba said. “Having the rink just be ten minutes away, walking has helped tremendously because now I can truly dedicate time to this and still have the extra hours go to the library and focus on studying.”

Ryba leaned in favor of studying physical therapy over continuing his hockey career in a junior league. From there, he checked out the ACHA programs of prospective schools and narrowed it down to two options: Iowa State and Illinois.

Iowa State was the first stop, but it was not a convincing trip.

The Illini made a much stronger impression, and Fabbrini’s squad is definitely reaping the benefits. Fabbrini gave Ryba a tour around the Big Pond arena, his first glance at the team. Combined with some of the rumors of Illinois potentially growing into an NCAA program, Ryba felt Illinois would be the best choice for him.

“The hope obviously is that he’s going to continue to grow and round out his game as he gets older here, that’s ultimately up to him,” Fabbrini said. “There’s guys who continue to get better and make the most of our careers, and then there’s some guys who have really promising young starts that taper off at the end. But Kacper is a guy who really likes the game and wants to keep improving, which makes me believe he’s going to be the former rather than the latter.”

Now, Ryba’s as close to his teammates as ever.

“They’re a great group of guys that are fun to be around, and because of that I’ve already found my best friends on campus,” Ryba said.

The young player has found his way into a large role and has emerged as a vital piece to the Illini’s current offensive scheme. With just a semester under his belt, both he and Fabbrini have reason to believe that his success is just getting started.

“I would hope to become more of a leader long term, but right now I don’t see myself in that role,” Ryba said. “I just want to go out and play my hardest every night, but in the future, maybe. We’ll see.”