Illini of the Week: Prince gets her time to shine 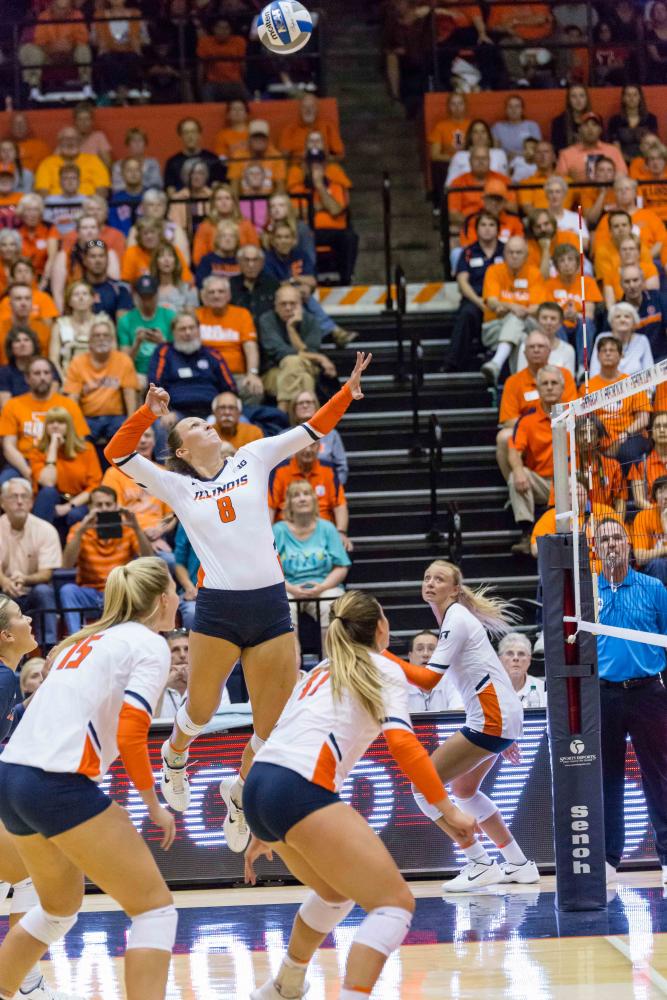 Illinois outside hitter Beth Prince gets ready to hit the ball during the match against Stanford at Huff Hall on Sept. 8.

Redshirt sophomore Beth Prince is just getting started on her collegiate volleyball career.

In high school, the Avon, Indiana native was named a PrepVolleyball.com All-American four consecutive times and found her home at the University of Illinois after she broke into the top 60 on the website’s recruiting list.

Her credentials prior to college are complemented by Under Armour Second-Team All-American honors and three Max Preps Volleyball All-American awards. She was also ESPN’s Freshman of the Year in 2011.

Prince was named to the ICGSA Class 4A All-State team four times and was named Indianapolis Star’s Super Team Volleyball Player of the Year twice.

Laden with talent, the six-foot-three outside hitter has tallied 112 kills over 38 sets and is hitting at a .280 percentage so far this season. But, this year hallmarks the beginning of what Prince says is her best season as an Illini yet.

During her first year at Illinois, Prince redshirted due to an ankle injury. Since rehabilitation and revisiting the court in 21 sets and 13 matches in 2016, she is back and has become an pivotal part of the Illini offense.

Prince has already surpassed her 30 kills and .167 hitting percentage from last season.

Head coach Chris Tamas said Prince has completely turned around from previous injury and is a key part of the Illini’s rotation.

“Beth has been doing a good job and has stood out on the outside for us compared to other years,” Tamas said. “It’s not always about getting kills, it’s about putting teams in awkward positions and getting balls out of system.”

Prince says that so far this season she has seen the team increase their grit on the court. She attributes recent match victories to the team’s ability to endure.

“I think first and foremost we really showed we can battle and come back from a deficit, so it’s something I think we’ve been talking about wanting to be a team that can be relentless,” Prince said. “I feel like I’m improving and taking better shots, especially compared to last season.”

The outside hitter tallied a season-high of 25 points against Colorado – a match the Illini lost in five-sets. She also collected a defensive high of six digs in five-sets against Missouri State last weekend.

On the defensive end, Prince has lent a hand in blocking 24 complete attacks so far this season. However, she said that her job on the court is made possible by everyone else – including the back court.

“Hopefully we can get our blocks in the right spot to take those certain shots away and follow those balls to our defenders,” Prince said. “They always do a good job of getting around us and filling in seems if they see them. If they work, I can work.”