Illini of the Week | A rematch one year in the making 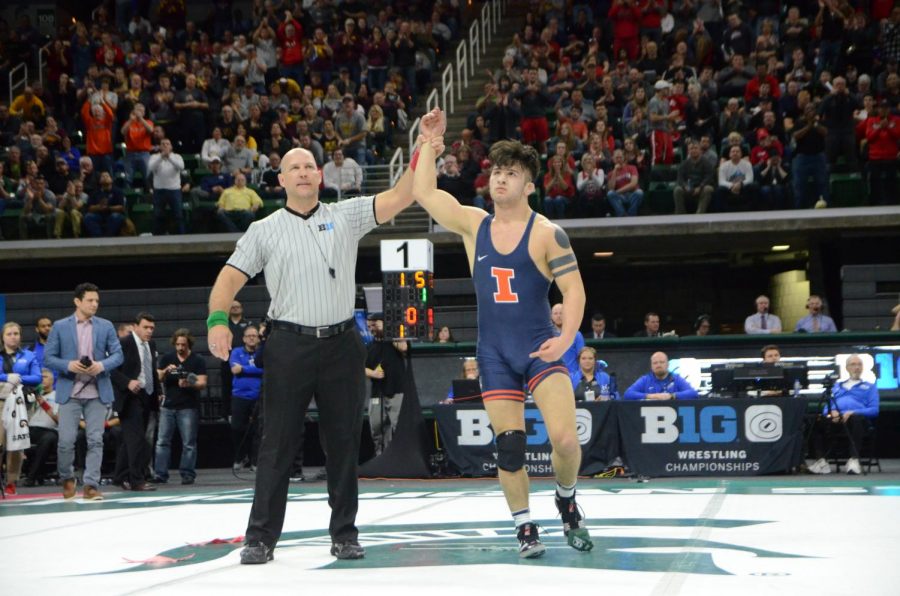 Martinez became the first Illini to win four Big Ten Championships, and he hopes to win the national championship.

Isaiah Martinez’ matchup against Penn State’s Vincenzo Joseph was a battle 351 days in the making.

This was the fourth time these two would meet. Going in, Martinez was 2-1 against Joseph. Their previous matchup was in last year’s NCAA Championships, where the then-freshman Joseph pinned the two-time champion in the third after a back-and-forth scoring bout.

Martinez’ objective since then has been to get back to the NCAA Finals, win the national championship and do so in a dominant fashion.

His road to the finals was very competitive. To get to the Big Ten Finals, Martinez had to get past both Nebraska’s Isaiah White and Rutgers’ Richie Lewis, both of whom seeded top 10 going into the tournament.

Against the No. 8 seeded White in the quarterfinals, Martinez scored early with a takedown in the opening period. Despite White responding with a takedown and an escape to take the lead 3-2, Martinez closed the match with two takedowns, and won 7-4.

Martinez then faced the No. 7 seeded Lewis in the semifinals. Lewis was the first to score in their match with a takedown, going up 2-1 against Martinez early on. However, Martinez gained momentum after scoring on a four-point tilt. When the first period was over, Martinez was up 7-2. Another escape raised his score to eight, and he withstood a 3-0 run from Lewis to advance to the finals.

The Big Ten matchup against Joseph might not have been the NCAA matchup like last year, but the significance of it couldn’t be ignored.

Three periods, two champions and a duel that could be a potential preview for another NCAA Championship match.

The match went different this time around. Unlike the previous battle that saw the two 165-pounders go back and forth throughout, this one was slow, drawn out and methodical.

The first period began with Joseph on bottom. Martinez started on top, but couldn’t manage to score. Although he failed to get points then, at the same time Joseph was unable to escape. The first period finished with neither wrestler scoring.

Martinez spent most of the second period on top again. He still didn’t score on Joseph, but the riding time was beginning to build up. Martinez remained on top of Joseph for one minute and twenty seconds, enough for a bonus point at the end of the match. With 40 seconds left in the second, Joseph got an escape that put him up 1-0, and he finished the second with the lead.

Martinez started the third on the bottom, but immediately escaped to tie the score back up. While the score was tied, the minute of riding time gave Martinez an advantage in the closing minutes. Joseph tried to get shots at Martinez but the Penn State wrestler failed to do so. In the closing seconds, Martinez scored on a lone takedown, finishing the match 4-1.

In doing so, he became the first Illini ever to win four Big Ten Championships. But he’s not letting the victory distract him from what’s been his main objective this entire season: winning the national championship.

“That’s what I love about this sport,” Martinez said after the win. “You train so hard, and you work and sacrifice so much, and for me, the ultimate goal of this sport is to line up next to a guy who believes he’s your equal. He may have worked as hard as you have, and sacrificed as much as you have, but hopefully not too much. That’s the best part of this sport, just trying to find the man that’s your equal.”