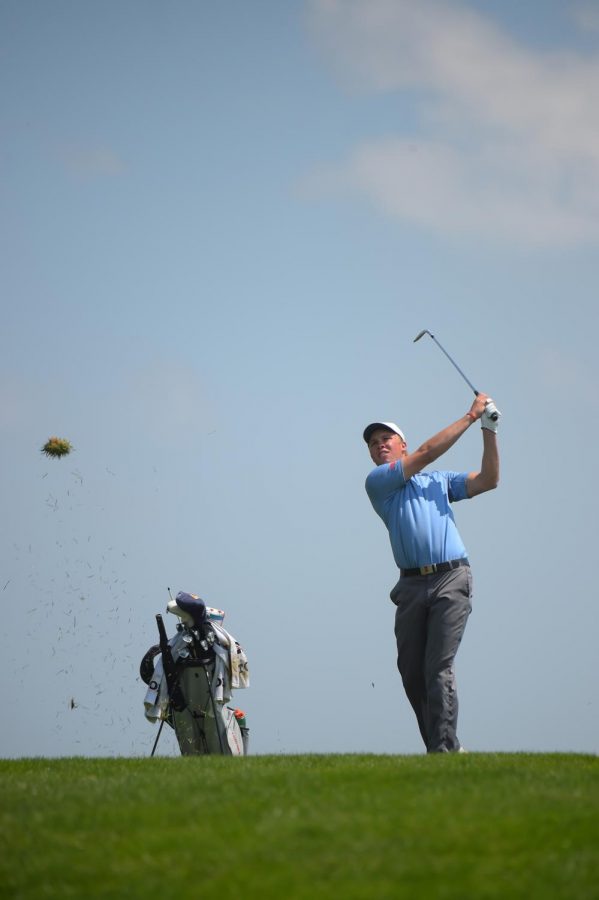 Senior Nick Hardy’s backdrop over the past 20 years has looked awfully green.

The two-time individual Big Ten Champion is about to wrap up his record-breaking career on the Illinois men’s golf team and he has a lot to reflect on. Hardy helped lead the Illini to four consecutive Big Ten Championships and three NCAA semifinal appearances.

Now, Hardy is poised to begin his professional career this June after graduation.

But the soon-to-be pro can’t help but reminisce.

“I started playing the game basically when I started walking,” Hardy said. “I fell in love with the game.”

Hardy’s father played golf casually and viewed the game as nothing more than a hobby at first.

But then, Hardy started playing in tournaments when he was 9 years old and he was hooked on making it into something more.

As he got older, tournaments became more serious and with that came the very real opportunity to be the cornerstone of a college golf program. And like most aspiring college athletes, Hardy underwent a tough recruiting process during his high school career.

“I was recruited by a lot of other Big Ten schools and some in the south too,” Hardy said. “But when I visited Illinois as a junior, I knew that was the place I wanted to go.”

His journey to Illinois mirrors other recruitment stories — a single visit and a single conversation sealed the deal for Hardy. After meeting with head coach Mike Small and seeing the golf facilities, he snatched up the offer immediately.

“Once I got to know my coach and my teammates, it definitely became my dream (school),” Hardy said.

And it’s still his dream school.

According to Hardy, the successful program he was recruited into has lasted well into his final season as an Illini. After four years, the team hasn’t changed much.

“When you win four Big Ten Championships, what you’re doing seems to be working pretty well,” Hardy said. “It’s just because of coach Small and the practices he has for us and the way he prepares us. It works and is very effective.”

Over the past four years, the Illini, at the helm of Small and assistant coach Zach Barlow, have produced some of the best golfers in the country. Although Hardy has seen dozens of golfers cycle through the men’s golf program since joining the team in 2014, a few of them have made lasting impressions on his career, including fellow senior Dylan Meyer.

Meyer came to Illinois in tandem with Hardy and the two have been in friendly-competition ever since. The pair are right next to each other in the national rankings at No. 27 (Hardy) and No. 28 (Meyer) and have consistently placed among the top-5 at nearly every tournament so far this season. The seniors have two Big Ten individual titles, six All-Big Ten honors, three All-America honors and six PING All-Midwest Region awards between the two of them.

But being the best team — and golfers — in the Big Ten hasn’t always been a breeze. During Meyer’s and Hardy’s junior season, the men’s golf team had no seniors. The abrupt change in leadership left the duo with pretty big shoes to fill.

“The first couple of years, I was able to learn a lot from my upperclassmen at the time. Then when I became a junior, I was already the oldest person on the team because there was no class ahead of me,” Hardy said. “(Meyer and I) had to step into the role fast of being a leader and setting good examples for the younger guys — bringing the freshmen in and letting them know what Illini golf is all about.”

Hardy attributes his success at Illinois to the support he has from his teammates and coaches. The team chemistry is so tightly wound that no matter what role Hardy stepped into, he said, there would be six other Illini there to support him.

Hardy said since the team is significantly smaller than other teams on campus, they’re able to spend time together in a group instead of cliques. His favorite pastime is hanging out with his the team away from the green.

“The cool thing about golf and being apart of a golf team is that we have only seven people on our roster,” Hardy said. “We always do something together and we’re always including everyone. I think that’s something I’ll miss most too.”