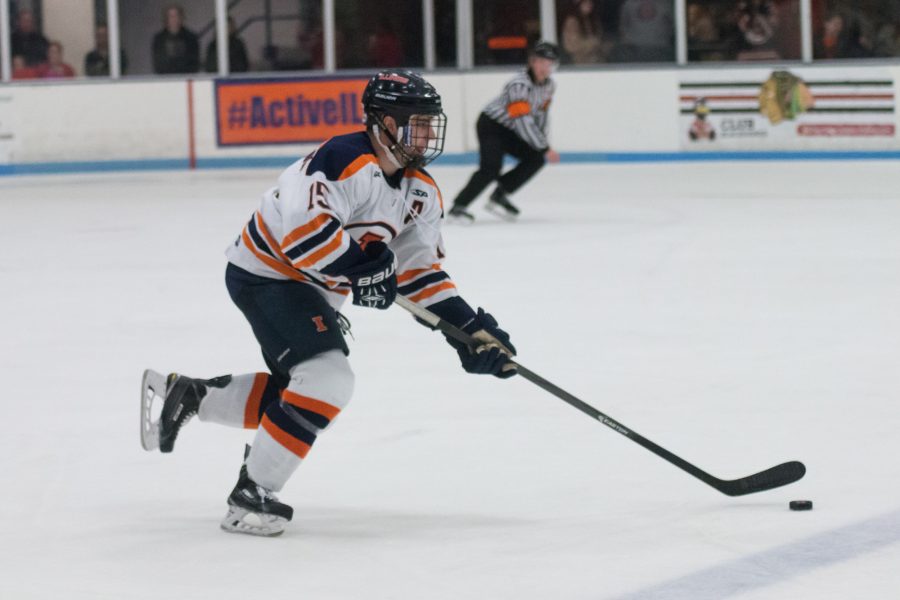 Illinois’ Eric Cruickshank carries the puck up the ice during the game against Lindenwold University at the Ice Arena on Saturday, January 30. The Illini lost 4-1.

As students left campus and returned home for the much-needed Thanksgiving break, the Illinois hockey team was gifted a break of its own.

The team’s last contest took place over two weeks ago when it shut out Ohio University and they will play this weekend against Northen Illinois University.

Illinois rose recently in the ACHA men’s Division I rankings from No. 17 to No. 15. Lindenwood, whom the team recently dropped a series to, ranks just above the Illini sitting at No. 12. Minot State remains the top dog holding its No. 1 ranking with an 11-1-1 record.

Head coach Nick Fabbrini said that his team played well leading up to the break, especially against Lindenwood. Even though they weren’t able to come away with the win, Fabbrini knows that limiting mistakes can be key in the future.

“I thought we played really well in both games,” Fabbrini said. “We haven’t played poorly in the games that we lost, but there were a couple we could of played better. A lot of them came down to mistakes and this weekend we were really able to cut down on them.”

The Huskies come to Champaign with a three-game winning streak and are looking to keep the momentum going against a Division I team.

Illinois will lean heavily on its scoring leader Eric Cruickshank. The center leads the team in points, goals, power-play goals and ranks third in assists. Fabbrini believes that his leader has benefited from some continuity with his linemates.

“Cruickshank has been playing very well so far this season,” Fabbrini said. “We put him on a line that he was pretty familiar with last season and it was a very good line for us.”

Illinois has experience against Division II competition, taking a series against Lewis University earlier in the year. The team scored a combined 14 goals in two games against the Flyers. Illinois will be looking for another similar scoring output after only netting three goals in the series against Ohio.

Having a chance to play at home will be big for the Illini as well. The team has not played on its home ice since Dad’s Weekend on Nov. 5 when the team exploded for an 11-0 shutout of in-state rival Illinois State.

Illinois plays its next two series at home with an opportunity to move further up the next set of rankings which come out Dec. 7.