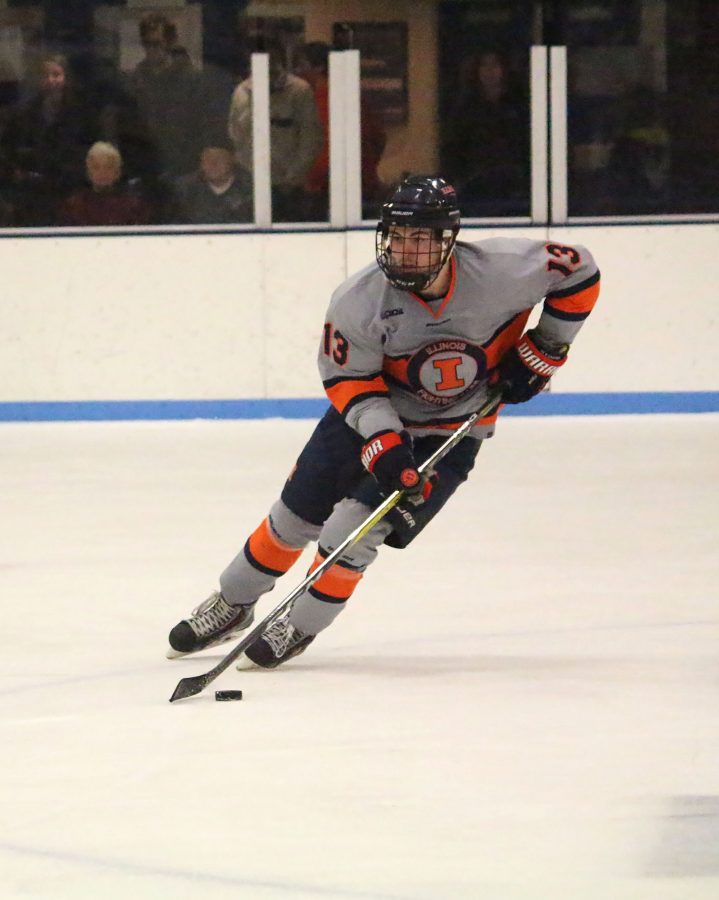 James McGing (13) gains possession against Lindenwood to take the puck up the ice at the Ice Arena on Friday, Jan. 20th. Illini lost to Lindenwood 2-6.

Illinois hockey will be at full strength again this weekend in a critical home series against Ohio.

Head coach Nick Fabbrini, forward James McGing, defenseman Tyler Opilka and goalie Joe Olen will return to the University after spending the past two weeks in Almaty, Kazakhstan, competing for the United Sates in the 28th Winter World University Games.

The United States finished 9th in the tournament.

The United States got a tough draw on Group B with Canada, Slovakia and Great Britain. They dropped the first two games to Canada and Slovakia by scores of 6-0 and 4-1 respectively.

Olen got his first start of the tournament against Slovakia, stopping 24 of 27 shots.

The 1-2 performance in the preliminary round was not enough to advance in the tournament.

The United States won both of their consolation games handily against China and Great Britain.

The team toppled China 17-1. Olen picked up his first victory of the tournament with nine saves. McGing, Arizona State’s Sean Murphy and Ohio’s Matthew Rudin each netted a hat-trick in the victory. The 17 goals were the most ever by a U.S. team at the Winter World University Games. Opilka had three assists in the win.

The United States beat Great Britain 10-1, again, in their final game of the tournament on Monday.

Illinois swept Indiana on Jan. 27 and Jan. 28 without the quartet as assistant coach Tommy O’Brien led the team. The Illini were off last weekend.

A previous version of this article stated the U.S. lost 10-1 to Slovakia. That was an error and the updated score of 4-1 has been added to this story. The Daily Illini regrets the error.