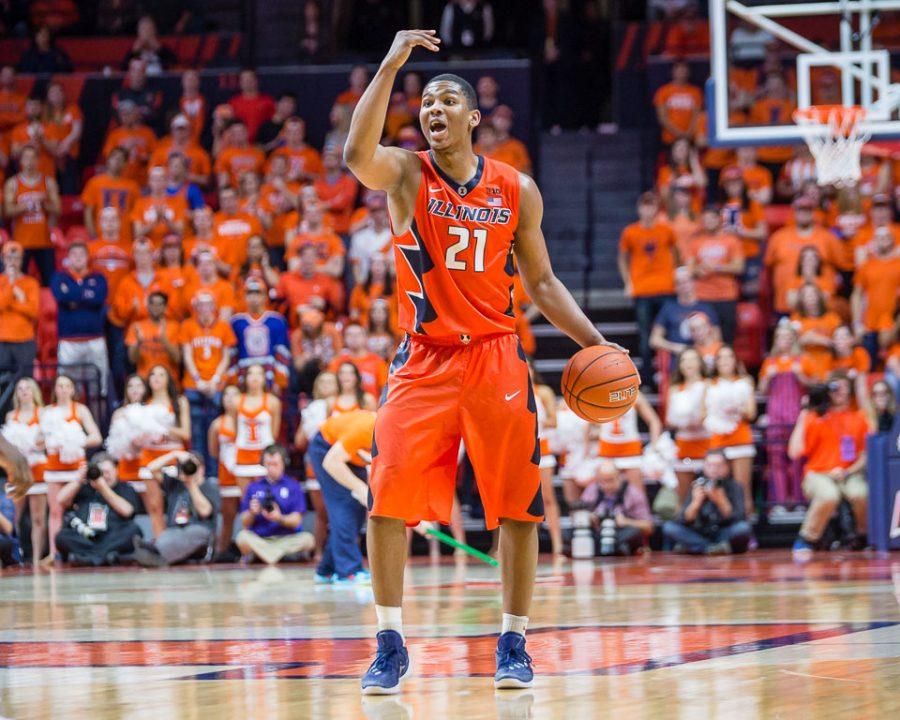 Illinois’ Malcolm Hill (21) calls out the play during the game against Northwestern at State Farm Center on Tuesday, February 21.

The late season Illinois charge rolled through Lincoln, Nebraska, on Sunday as the Illini knocked off the Cornhuskers 73-57 to win the team’s third straight.

An offensive explosion in the second half, coupled with another strong night on the defensive end led the Illini to the team’s seventh conference win.

The Illini opened the game by doing what has brought the team success over the past few weeks: setting the tone on defense. From the tip, Illinois established itself on the defensive end, forcing Nebraska into long possessions and poor shots. The Huskers failed to top 40 percent shooting from the field in the first half; however Illinois could not capitalize, shooting just 40 percent from the floor.

Maverick Morgan put the offense on his back for long stretches of the opening half, scoring 10 for the period, including eight straight midway through the half. Aside from Morgan, the majority of the rest of the Illini offense came from the perimeter, as Illinois was 5-for-13 from deep.

The second half featured a three-point barrage the likes that Illinois has not shown in Big Ten play. Jalen Coleman-Lands, Tracy Abrams and Malcolm Hill knocked down 11 three’s on the day, leading the Illini to eight second-half three’s. Behind the offensive output, Illinois opened up a double-digit lead on the Huskers. The lead stretched to as many as 19.

Hill led the way for the Illini offense with 19 points on 6-for-11 shooting. Hill passed Cory Bradford for fifth all-time in scoring at Illinois and is primed to move past Brian Cook in Illinois’ matchup with Michigan State on Wednesday.

Abrams regained confidence in his shot by pouring in four three-pointers on a 13-point night. Abrams added in six assists to go along with his hot day from the three-point line. Morgan had a quiet second half, but still finished with 12 points on 6-for-9 shooting.

The win moved Illinois to 7-9 in conference play and was the team’s third-straight win.

The Illini have been turning heads with their play of late, making it into the conversation for the NCAA Tournament. Multiple outlets have shown Illinois in the “first four out” group of the tournament conversation, but the win over Nebraska could help push the Illini further into the tourney conversation.