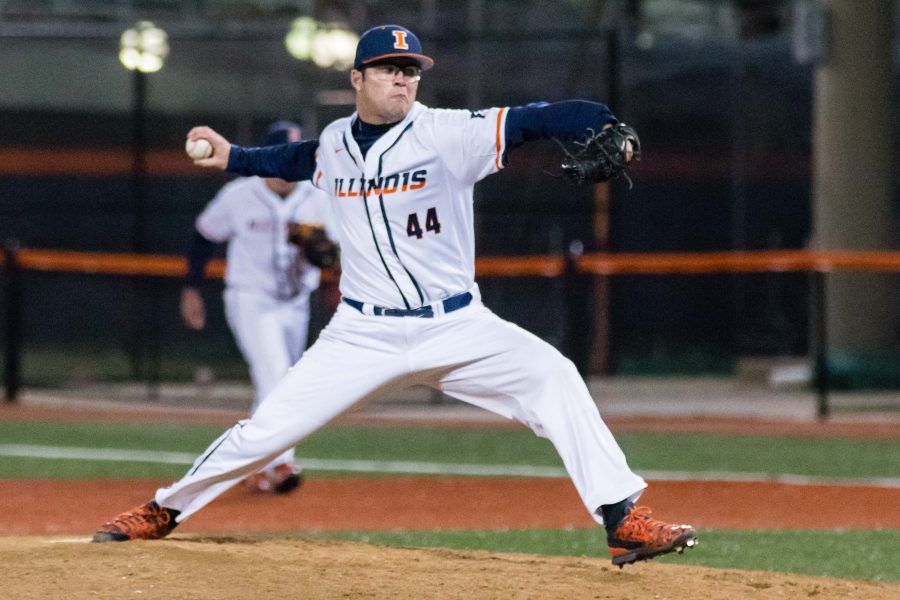 Illinois’ Quentin Sefcik pitches in the game against ISU on April 12.

The Illinois baseball team played in some long, drawn-out games this past weekend in the Kleberg Bank College Classic. Texas A&M Corpus Christi hosted the tournament, which consisted of three other teams: Illinois, Houston and Missouri.

Through the first four innings, the pace of play was like a typical baseball game, with the Illini holding a 5-1 lead.

That changed quickly when the fifth inning came around. Illinois scored one run in the top half of the inning that was followed by four runs by the Islanders in the bottom half to tie the game.

The hits continued piling up for both teams with Illinois scoring nine runs in the next three innings while Texas A&M Corpus Christi put up six.

The Illini failed to score in the top of the ninth but withstood a three-run comeback by the Islanders to win 15-14.

“I thought we did not pitch well at all,” head coach Dan Hartleb said. “But I thought our guys did a good job of competing and really battled to stay in the game.”

Illinois returned the next day with a matchup against No. 25 Houston.

The Illini got off to a good start, leading 5-0 for the first four innings. The lead evaporated when Houston sent 12 men to the plate in the bottom of the fourth inning, scoring seven runs.

Sophomore Quinten Sefcik was responsible for all seven earned runs and was pulled after getting one out in the inning.

The Cougars added another four runs in the bottom of the eighth inning off of sophomore Joey Gerber to make it an 11-5 score. The Illini could not respond in the top of the ninth, going down 1-2-3 to lose the game.

“We need guys to step up,” Hartleb said. “I know they are very capable of doing it. I’ve seen them do it in practice against our hitters, who are very good hitters. (Our pitchers) have been very productive (in practice), and it’s expected they do the same when we go out and face other teams.”

Illinois was matched up with Missouri in its final game of the series.

The Tigers scored the first four runs of the game off of freshman Ty Weber. The first inning runs were not enough for Missouri to keep the lead. Illinois responded with six unanswered runs.

In the bottom half of the first inning, senior Pat McInerney belted a three-run home run to cut the lead to one. McInerney tallied a combined nine RBIs over the weekend.

Freshman infielder Michael Massey hit a three-run home run of his own in the following inning to give Illinois an early 6-4 lead. Tigers starting pitcher Liam Carter was pulled after two innings and was replaced by sophomore Cameron Dulle.

Missouri added two runs in the fifth and another in the sixth to take a one-run lead.

Dulle kept the Illini contained, going 2 1/3 innings and giving up two hits and no runs. Illinois tried to start a rally against TJ Sikkema, Dulle’s replacement.

Sikkema covered the next 4 1/3 innings to close out the game and seal a win for Missouri. The freshman gave up three hits, one walk and struck out eight.

“We’re disappointed with the start (of the season),” Hartleb said. “I know we’re making progress, and I know our guys are passionate about winning. We can improve on some things, but we know we’re getting better.”