Davis is ready for added minutes 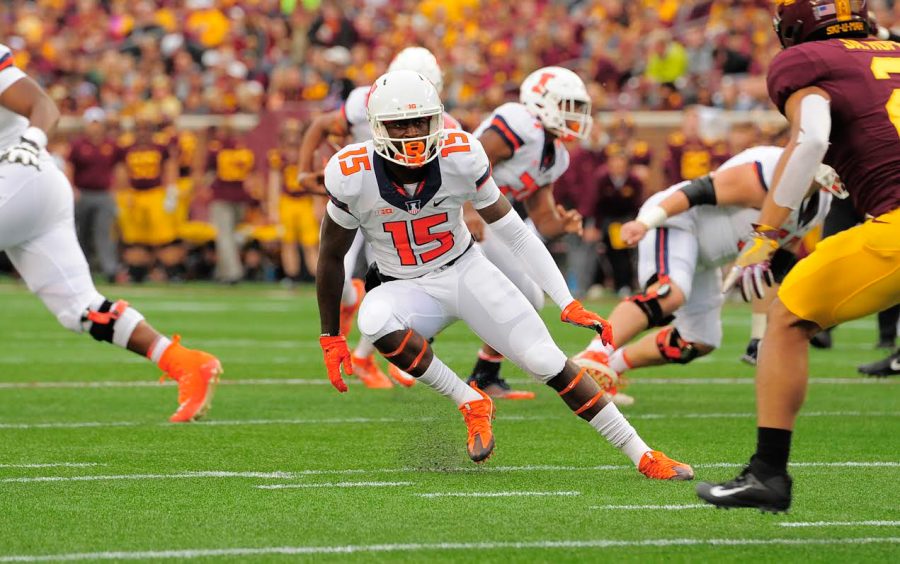 Illinois Wide Receiver Trend Davis makes a move downfield in the Illini’s game against Minnesota on Oct. 21. The Illini lost 24-17.

Davis attended McGee’s quarterback meetings to go over schemes and game plans while the receivers were out practicing on their own.

“That gave me a chance to know Trenard more,” McGee said. “When he was in my meeting room, I got to know how he thinks and what he’s like; he’s a winner.”

Illinois recruited Davis out of American Heritage School in Florida as a wide receiver but found that he could also serve as a quarterback in the system.

With the recent injuries to Mike Dudek and Malik Turner, the Illini have turned to others to step up and fill their voids.

Davis has been one of those guys.

Davis said stepping into a more prominent role on the offense was not a big deal, but he also said the team is missing Dudek’s and Turner’s leadership over the younger players on the team.

Sophomore Caleb Reams was also given an opportunity to play against the Hoosiers.

He ended the day with two catches for 18 yards and a touchdown. It was Reams’ first touchdown of his career.

Head coach Lovie Smith acknowledged that he enjoyed seeing both Davis and Reams step up and make the most of their opportunities.

Smith said all his players have to be ready to hear their names called when another player injures himself.

“With injuries, we have had to shuffle guys and we’ll shuffle some more this week,” Smith said. “Your role changes weekly, and you have to know that as you come in.”

Three different Illini quarterbacks have been under center this year, which has been a challenge for their receivers to adapt.

Chayce Crouch began the year as the Illini starting quarterback, but he was replaced by Jeff George Jr. in Week 5 against Iowa. Freshman Cam Thomas has also split time with George when healthy the past few weeks.

Davis said the adjustment isn’t as tough on him as it is on the quarterbacks.

“The only tough thing about it is them getting used to you,” Davis said. “Every receiver has different strengths and weaknesses, some move fast, some move slower, so you really look for the quarterback to level up to them so everybody can get involved.”

Davis will look to get another opportunity this weekend at the wideout position with Dudek not expected to play and Turner’s uncertainty.

McGee hopes he can get the same effort out of Davis against Ohio State this weekend.

“He can see the game a little different,” McGee said.

“He’s one of our competitive guys; it’s good to see him continuing to make some plays out there.”