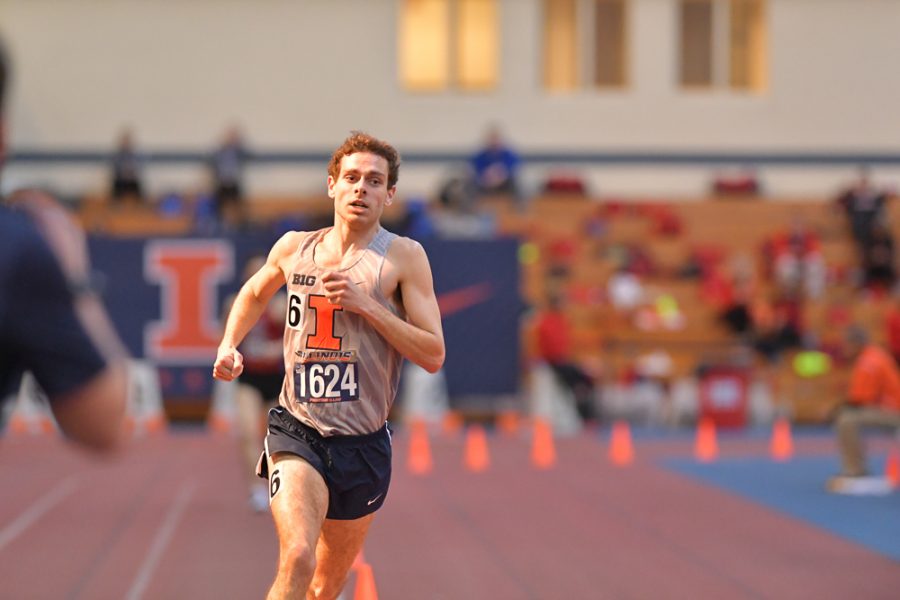 Illinois junior Jon Davis runs during the Illini Classic at the Armory in Champaign on Jan. 27, 2018.

It took until junior high that someone noticed his extraordinary ability. After trying different sports as a young kid, Davis recalled a rather unexpected conversation he had with his football coach.

“Actually, my seventh-grade football coach suggested I run track,” Davis said. “He could tell I was a good sprinter, so I started that year and began running the 1,600 (meter race).”

While his talent and ability were obvious, competing in races can feel like a whole new world for a seventh-grader, and Davis was no different. He still was too young to know for sure if running was going to be a part of his future. If it weren’t for Davis’s inherent competitiveness, he may not have stuck with running.

“I actually didn’t love running right away, but I quickly found how easy it was to beat people, and I just really liked beating people,” Davis said.

His competitive nature and the satisfaction derived from winning set him apart.

Growing up in the small village of Fithian, Illinois, meant that Davis would attend Oakwood High School. Even at one of the smaller high schools in the state, Davis’ numbers spoke for themselves, and he ended up getting looks from a multitude of schools.

The difference in size of the schools was one of the big challenges of coming to Champaign.

Reflecting on the journey has been a humbling experience for Davis, who still has more than two years of his collegiate career to come.

Off the track, things are a little different now. As a full-time student-athlete, the commitment to schoolwork and running are priorities No. 1 and No. 2, respectively. Davis alluded to how time management becomes even more important now in college, just like running does, compared with high school.

“Other than studying, I’ll just hang out with the guys,” Davis said. “There’s not really much time for anything else (as a runner).”

Recently, Davis supplanted Graham Morris in the Illini record books and became the 498th American to run a sub-four-minute mile (3:58.46). Two weeks later, Davis ran the fastest 3,000 meters (7:49.92) in the history of the Illinois track and field program.

Breaking Illini records is just another step in the right direction for Davis. While personal accolades are nice to have, Davis has always measured success through the team first. The Illini will need more strong performances from Davis if they want to be in contention for a conference title when it’s time for the Big Ten Championships on Feb. 23 and 24 and beyond that going into the future.

“The goal has always been to win a national championship,” Davis said. “We have a chance to do that in about four weeks.”