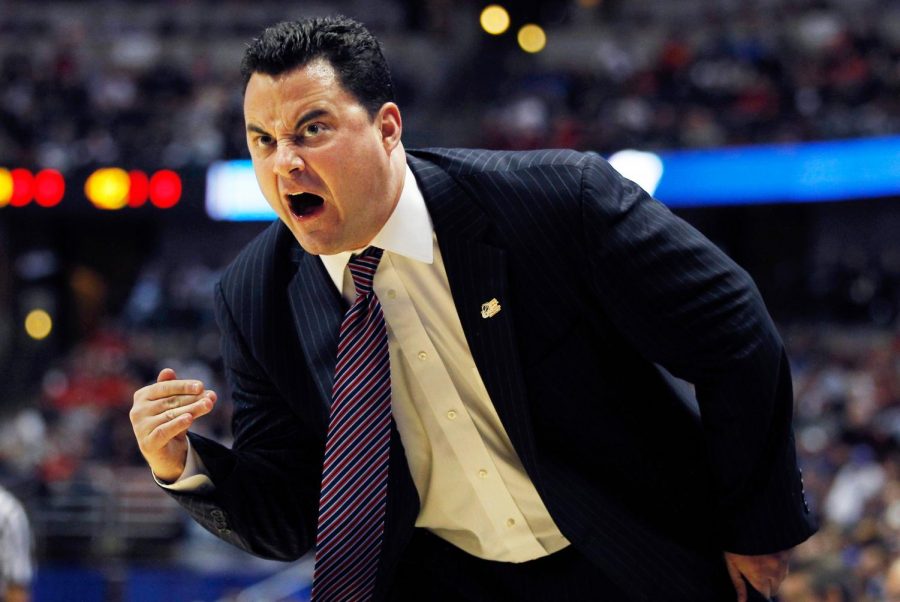 Arizona head coach Sean Miller urges on his players in the first half against Duke at the Honda Center in Anaheim, California, on Mar. 24, 2011.

Arizona head coach Sean Miller was not present at his team’s loss to Oregon on Saturday.

Only hours before the game, it was announced that Miller was the latest victim of the FBI’s investigation into college basketball. The FBI wire-tapped his phones and heard him discussing paying Deandre Ayton $100,000 to come play at his school — an obvious violation of the NCAA’s amateur status rules.

When word of this investigation first got out, I didn’t know what to think. Everyone’s immediate reaction was that the whole landscape of college basketball is about to be destroyed, and who can blame them? Everybody knew it was going on, but now there was a third party — the most powerful third party that could possibly be involved, for that matter — looking into it.

Shoot, for a little bit of time, I thought the Illinois basketball team was going to make the tournament because of how many programs it was about to take down.

At first, I was worried this was just going to cause the NCAA to restart, and eventually they would get back to the same spot in a few years. I am firm believer that every crime the FBI is investigating is unavoidable with the way the NCAA’s rules are structured. I was also worried the blame would be put on the wrong party.

Ayton is not to blame in this scenario. You can’t blame him, or any other athlete, for taking a payment. They were in high school when this happened. Also, you can’t lump instances together. Miles Bridges is in the same report for receiving $500. That is ridiculous.

I don’t think everybody has been paying players, but the way the NCAA keeps world-class athletes from being paid is, in my opinion, a bigger crime. The player who Miller paid deserves way more than $100,000 for what he does on the court. His economic impact for the University and the surrounding community is way above that level.

As more information has come out, though, I really do think this is the perfect and only — time for the NCAA to completely overhaul and allow players to be compensated.

Forget amateurism. It is stupid. These athletes are too good to be amateurs.

I do not think that universities should be the ones paying them. I used to think that, but there are just too many problems presented with paying players similar amounts of money. Instead, the NCAA needs to drop the amateurism stuff and allow players to make money off of their own brand.

Businesses would line up at the chance to have top athletes advertise for them, and it would solve the whole problem of paying the athletes equally.

Trust me, I know I am not reinventing the wheel here. I am so far from the first person to suggest this. But it is just so obvious. College sports is a multi-billion dollar industry, and the athletes are unable to be compensated even remotely fairly.

Change is made when large groups of people act together to make their voices heard. Before, there were a bunch of voices, but now they have something to unify them. The breakdown of college basketball is at the forefront of the sports world, and people are all talking about it at the same time.

The NCAA is flawed. If they weren’t, then the FBI wouldn’t be burning it down with a flame thrower right now. They can rebuild it from the ashes and make it so much better.