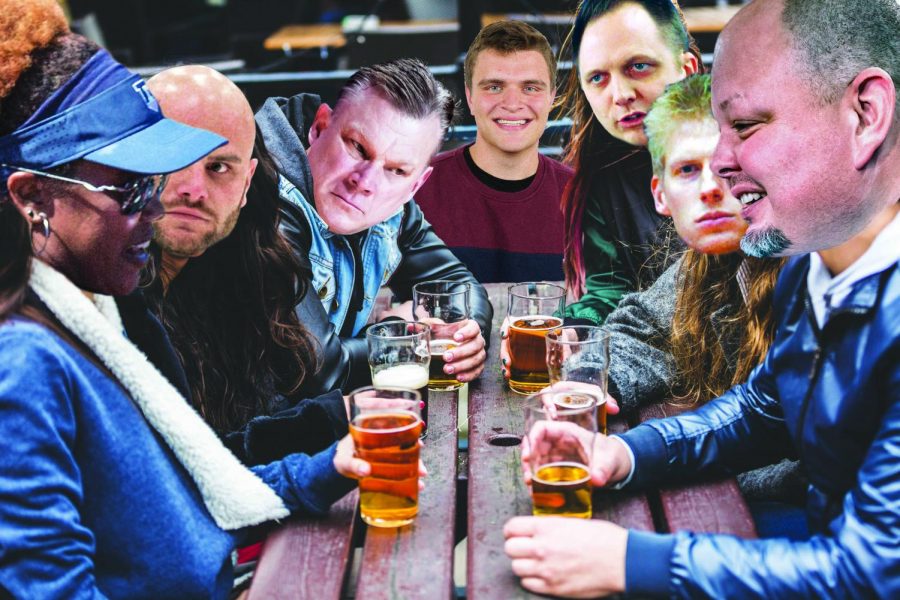 I have spent a lot of time around Illini coaches in my four years here at the University of Illinois, and with my time as a reporter at The Daily Illini and it being Unofficial season, I figured it’s time for a nice power ranking.

I am not going to rank who the best coaches are at this school. No, I am going to stay in the holiday spirit and rank the top six coaches I’d like to grab a beer with on Unofficial.

Disclaimer: This list will be skewed toward the coaches I have met personally. I have not had the pleasure of meeting every coach at this University, and while I am sure they are all wonderful people, I had to narrow it down.

When you factor in the beard, Smith has turned into a complete sage.

I interviewed Justin Spring for the first time just the other day. Being one of the youngest coaches at the University, I feel like he’d be fun to get a beer with just because there isn’t quite as much of an age gap.

If I had to take a total shot in the dark, I bet Spring is a big craft beer guy. I myself enjoy a nice craft beer, but being from St. Louis, I stay loyal to any Budweiser product over anything else.

Also, did I mention Spring is a Hall of Famer? That is a big factor, here. He told me that when his players texted him congratulations on being named to the Illinois Hall of Fame class, he responded sarcastically with the Ron Burgundy, “I’m kind of a big deal” GIF. “Anchorman” is an all-time favorite of mine, so if worse comes to worst, I will just start looking at things around the room and saying I love them.

The University has set a trend with its softball coaches. Apparently it has to be part of the criteria that they have to be the nicest people ever. When I covered the softball team, Terri Sullivan – the first softball coach in school history at the time – was at the helm. She was always so cool when I would show up to practice. It is weird when a coach actually seems happy to see media. When Tyra Perry took over, I was wondering if she could match Sullivan’s enthusiasm.

Once again, I have only had the pleasure of talking with her one-on-one just a few times, but I have heard plenty of good things from other people. She has been doing a solid job with the Illini softball team, and I am sure it’d be fun to hang out with her for a bit.

I have been to my fair share of Underwood press conferences this year, so I basically know the guy. That is exactly how this works. But really, Underwood seems like a great guy, and I could talk to him about basketball for hours. Just like tennis, I played basketball my entire life, but I can talk about basketball way longer than tennis.

But if the conversation branched off from basketball, I still think it would be fun to grab a beer with Underwood. He seems like a guy who has a killer man cave at his house, and I bet he is a big poker guy. And, if there was one person on this list who would forego the beer for a glass of whiskey, it is Underwood, and I respect that.

Also, he is very loud. I am very loud. I have no doubt in my mind we would have absolutely no trouble hearing each other.

The new Illinois volleyball coach has definitely established himself as a goofy dude, which is why he made it so high on this list. I have no idea what we would chat about over the beer.

I am basing this choice off things Tamas has done in the past. The costume contest at practice for Illinois volleyball was hilarious, and on his birthday, the man gave out free tacos at Taco Bell. If you want to make friends, you can never go wrong with free tacos. I didn’t get one of the tacos because of journalism rules, but in my eyes, it was the thought that counted.

Coaches, if you want to make it higher up on this list, give out free tacos.

The main thing Tamas has going against him is that out of every coach on this list, I feel like he is the one who would leave early to go home and take care of his kids or something. He seems like a total dad.

If I would have written this list last semester, Fabbrini would’ve been No. 1 without hesitation. I spent a season covering the Illinois hockey team, and I still think it was my favorite team I have covered. The team is good year-in and year-out, and Fabbrini is an alumnus of the University. That obviously gives him bonus points.

Fabbrini is just genuinely a good guy. He grinds to coach the hockey team, despite them not being a varsity sport, and he teaches little kids to skate all the time. I don’t have much more to say because this was just an obvious pick for me.

Now you may be thinking, “Cole, Rod Smith has only been here for a few weeks. How could you put him at No. 1 over all the other coaches who have been here so much longer?”

It’s easy. When I went to Smith’s introductory press conference, and he was cracking jokes about him being a polar bear and during all that, I had only one thought:

“I would want to get a beer with this guy.”

I know for a fact that Rod Smith already has a little dive bar that he frequents in Champaign when he isn’t on recruiting trips, and when he walks in the door, every person in the bar turns and yells, “ROD!” excitedly.

That is the simplest way I can explain Smith after meeting him one time.

Coaches, I’ll be at KAM’s on Friday.