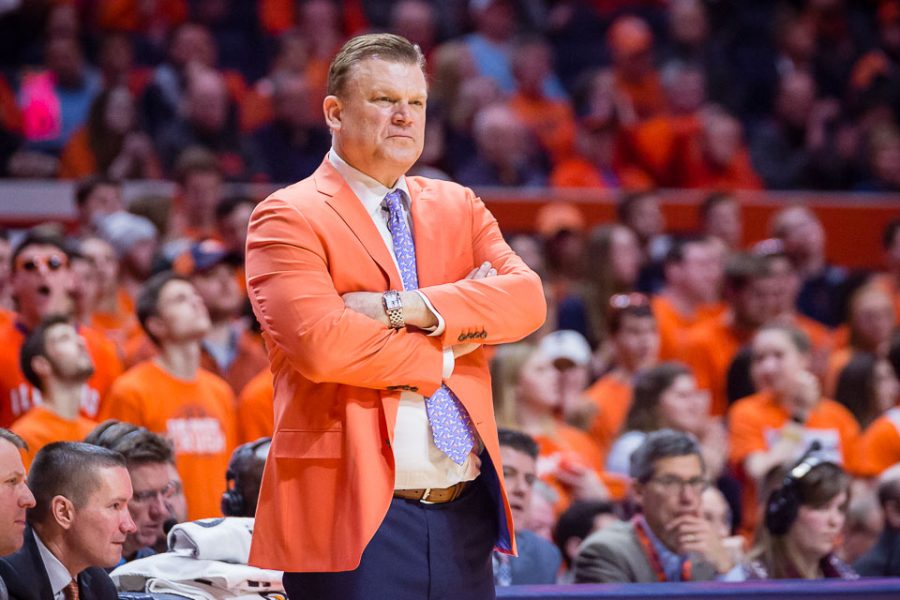 Illinois head coach Brad Underwood watches his team from the sideline during the game against Indiana at State Farm Center on Wednesday, Jan. 24, 2018.

Underwood began by offering respects to the passing of legendary coach Tex Winter, who Underwood said he got to know when he was at Kansas State as a player and coach. He then went on to talk about his team, continuing the theme of “youthful exuberance” he mentioned to the local media before.

“This is the youngest team I’ve been a part of since I was a Junior College coach,” Underwood said. “That’s exciting … it’s a group of guys that is helping lay a foundation.”

The schedule was next on Underwood’s agenda, mentioning the 27 “high major” games and calling it the toughest schedule in Illinois history.

“Strength of schedule sure won’t be a problem for us,” Underwood said.

When the floor was opened to questions, Underwood talked about how he looked to increase the Illini’s versatility, striving for “positionless” basketball. To have a team that plays “positionless” usually comes with good passers, and Underwood said his team has plenty of those.

“[The players’] skillset is one that I really enjoy; this is a really good passing team,” Underwood said. “Our basketball IQ is pretty high.”

That versatility may manifest itself in some unorthodox lineups, as Underwood brought up how the Illini may utilize three point guards on the floor at once.

One of those point guards is team-standout Trent Frazier, who Underwood has been impressed with in terms of how he’s handled his breakout freshman season.

“You have a freshman that has a lot of success, and you’re always curious how they’ll react to that,” Underwood said. “It’s no secret he was a left-hand dominant player last year; now he’s just as good going right.”

Frazier has also taken the next step toward leadership with a bulk of young players coming in, according to Underwood.

“You talk about a committed, dedicated individual,” Underwood said. “He’s everything I would’ve hoped him to be and more. He knows he’s a good basketball player.”

Underwood concluded his session by talking about how the Big Ten scheduling has changed.

“Jim [Delaney] does an incredible job as far as foresight,” Underwood said. “We are the first conference to go to 20 games… one thing we have in the Big Ten is 42 straight years leading in attendance; we are ahead of the curve.”