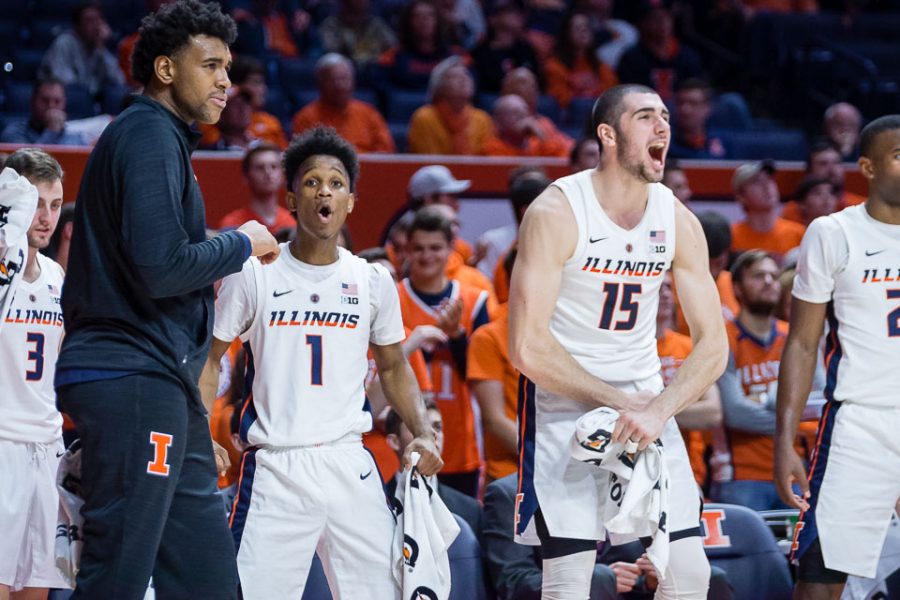 Illinois guard Trent Frazier (1) and forward Giorgi Bezhanishvili (15) celebrate from the bench during the game against Evansville at State Farm Center on Nov. 8.

No new face shined brighter for the Illinois men’s basketball team in its home opener Thursday night than Ayo Dosunmu.

Dosunmu stuffed the stat sheet to the tune of 18 points, six rebounds, four assists and three steals in 24 minutes, powering the Illini to a dominating 99-60 win in their opener over Evansville.

It was an exciting debut for the No. 1 ranked player out of Chicago last year, and that excitement even reached Dosunmu.

“The emotions were incredible,” Dosunmu said. “Playing for my home state and having the jersey on for real, it was tremendous.”

While Dosunmu’s point total grabbed the eye, head coach Brad Underwood was quickest to compliment everything else Dosunmu did.

“We’ve been spending a lot of time these last few days talking about rebounding the basketball, and he’s a guy that has to rebound,” Underwood said.

The Illini didn’t waste any time putting distance between themselves and the Purple Aces with a 44-9 run in the first half, led by a flurry of points from Aaron Jordan, who finished with a team and game-high 19 points.

Jordan flashed the three-point shooting that had him scoring 60 percent from the three point line during the nonconference schedule last season, knocking down five of eight from beyond the line, four in the first half alone.

On the passing end of a few was Trent Frazier. For the biggest returning name on the Illini, it was a relatively quiet night for Frazier, who put together a 10-point night on 10 shots, eight points in the first 10 minutes.

However, newcomer Giorgi Bezhanishvili’s night was anything but quiet. The freshman big snagged 10 rebounds, but most importantly he played 22 minutes and finished with just two fouls. After struggling with foul trouble in the exhibition game, Bezhanishvili set out to make sure that didn’t happen again.

“I always say ‘stay focused,’” Bezhanishvili said. “Heading into the game, I had two things (in mind): stay in line and get rebounds. It nicely just happened.”

Bezanishvilli couldn’t manage to stay completely out of trouble, as after he was whistled for his first foul he picked up a technical foul for arguing with the referee.

“You know I talk a little bit,” Bezhanishvili said. “I was talking too much … I said another word I should not have said.”

Underwood wasn’t much of a fan of the move either.

“Don’t say that anymore,” was the simple message delivered by the head coach, who also said he needs to talk to the referees to see what Bezhanishvili said exactly.

Despite the technical foul, the Illini continued to dominate the second half, something they were unable to do in the exhibition game.

Illinois’ schedule quickly ramps up with its game at home against Georgetown on Tuesday, but Underwood already feels like there are positive takeaways.

“This team is unselfish, and I felt pretty good about that,” Underwood said. “We’ll continue to work.”