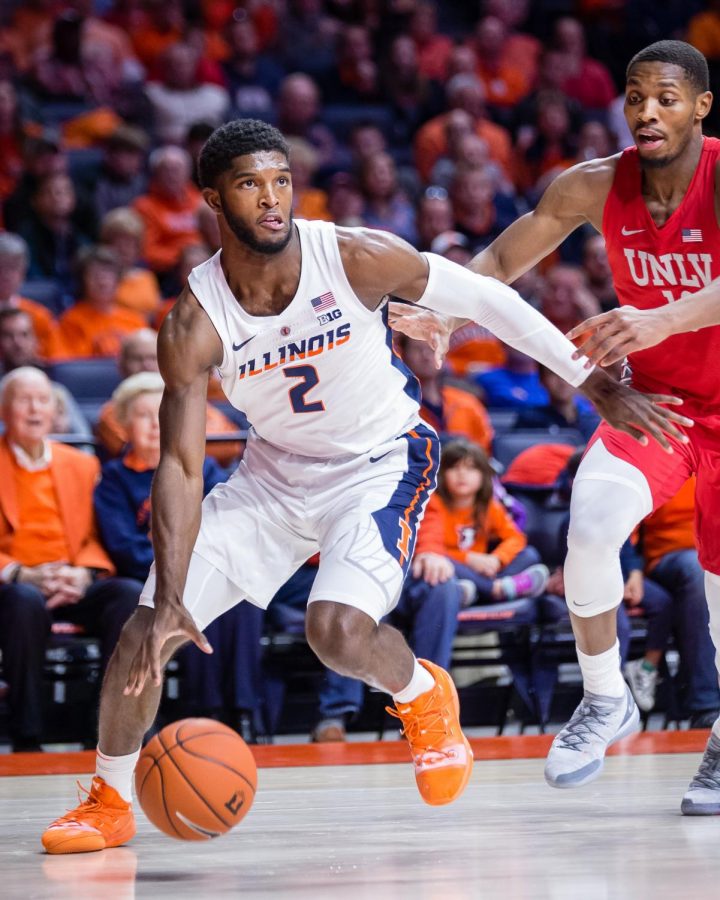 While the polar vortex was surely out of Champaign Saturday afternoon, so was Kipper Nichols’ cold streak.

After an underwhelming showing at The Barn earlier in the week, Illinois was guided by Nichols’ season-high 18 points to a 71-64 victory over the Nebraska Cornhuskers.

Illinois put up a strong defensive performance, holding the Cornhuskers to a 35.7 percent shooting performance from the field and 13 percent from behind the arc.

“From a defensive standpoint,” Underwood said. “I thought this was our best all-around game defensively.”

The Illini went back to a familiar game plan to start the night, feeding the ball to freshman big man Giorgi Bezhanishvili to start the game. The big man knocked down his first shot attempt to jump-start a 7-0 run.

After a timeout by Nebraska head coach Tim Miles at the 18:20 mark, the Cornhuskers regained composure.

Cornhusker star James Palmer Jr. put up seven shots over the following four minutes, knocking down two three’s and a layup to spark a 10-0 scoring run and give Cornhuskers the lead.

After a couple of minutes of back-and-forth, Illinois began to put on a scoring run of its own. Nichols ended his five-game scoring drought in a big way. The junior knocked down a fadeaway jumper and went on to score the next seven Illini points.

“It feels good,” Nichols said. “We have a great locker room full of great guys, great coaches that have the utmost confidence in me.”

Nichols also collected six rebounds on the night and tallied 29 minutes played after averaging only ten minutes over his previous five games, with a season-low four minutes against Minnesota.

“I’m really happy for Kip, and I really took the approach to almost coach him as if he wasn’t a member of the team,” Underwood said. “I really left him alone. I thought he may have too many people in his ear, including me.”

Sophomore Trent Frazier, coming off his highest scoring effort of the season against the Golden Gophers (30pts), began to catch fire near the end of the half. The Freshman quickly scored his eight points behind two quick three-pointers.

Walking off the court, the Illini entered the locker room with a 38-29 lead.

The lack of depth on the Cornhusker roster was a point of discussion heading into the game with senior-leader Isaac Copeland being knocked out for the remainder of the season due to a knee injury. With Nichols putting up 10pts in the first half, the Illini’s bench easily outscored Nebraska’s 17-2.

Throughout the game, Nebraska head coach Tim Miles gave an earful to the referees while Underwood began to follow suit. While both coaches avoided technical calls of their own, the Cornhuskers Glynn Watson Jr. and the Illini’s Andres Felize drew a double-technical call in the early stages of the second half.

The Illini were able to keep Watson Jr., who came into the game averaging 13ppg, under control. The point guard fell into foul trouble and remained scoreless until the 11:01 mark in the second half. He finished the night with just six points and eventually fouled out with 2:32 to go in the game.

“We just have a lot of good players that pride in defense,” Dosunmu said. “We knew that with one of their best players being out, that Palmer, Watson, Roby were going to try and get more shots up, so we have to come together and guard.”

Palmer Jr. acted as the only consistent offensive presence for the Cornhuskers throughout the game, putting up 22 points and eight rebounds.

Midway through the second half, Nebraska cut the Illinois lead to 54-47 but two Dosunmu layups kept the momentum on the Illini’s side.

Piling onto the second half lead, the Illini put Frazier and Dosunmu both into double figures with 11 points and 13 points, respectively.

The Huskers once again came within seven points with 1:09 left in the half, and despite a troubling 9-23 free throw performance, the Illini were able to do just enough in the final minutes to grab the third Big Ten win of the season.

Illinois will now continue its home stretch with a matchup against Michigan State on Tuesday night at 6:00 pm CT.