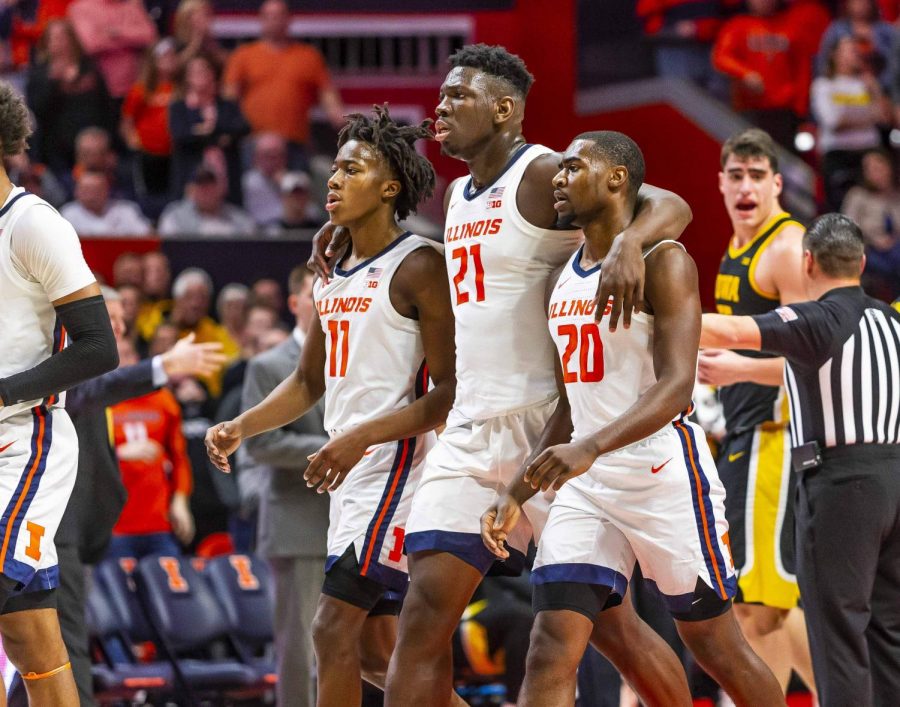 After blocking a career-high six shots in Illinois’ 67-66 nail-biting win over Indiana on March 1, freshman center Kofi Cockburn received effusive praise from head coach Brad Underwood for his desire to improve over the course of the season.

“You want (Cockburn) to get to the level that you know he’s capable of, so he’s fun to work with because he just keeps wanting more,” Underwood said. “You forget he’s an 18-year-old kid; he’s emotional sometimes. His physical tools make it fun to work with (him) every day, and he’s eager.”

Though it was a touching sentiment from the Illini head man, it was actually false. Cockburn was born on Sept. 1, 1999, making him 20 years old, with a birthday right on the border of the age range between either a typical American sophomore or junior in college.

Nonetheless, the Jamaica native is still a freshman officially, and his effort all season was rewarded on Monday, as he was named the 2019-20 Big Ten Men’s Basketball freshman of the year by both the coaches and the media.

Averaging 13.3 points and 8.8 rebounds while grabbing 12 double-doubles, it was certainly a season that met outside expectations for the highly-rated four-star recruit, but Cockburn didn’t necessarily see things that way.

“I did not expect this coming into my freshman year,” Cockburn said in an interview on the Big Ten Network. “To accomplish this great goal, it was actually set by my mentor Karriem Memminger — I had no idea I was capable of completing this task. I’m just happy that be believed in me and instilled that in me (to) come out and compete every night.”

Coming into the season, there were concerns as to how Cockburn would gel alongside sophomore Giorgi Bezhanishvili, as both fit best as the lone big man in a four-out offense. While the pair made things work for the first two-thirds of the season, Cockburn eventually established himself as the more critical piece, relegating Bezhanishvili to a reserve role and allowing the Illini to take off as a team by going small.

What makes Cockburn’s statistical success all the more impressive is the competition he faced at his position in the Big Ten this season, as the conference was as deep as it’s ever been with quality bigs. From Iowa’s Luka Garza to Minnesota’s Daniel Oturu to Maryland’s Jalen Smith to even Wisconsin’s Nate Reuvers or Michigan’s Jon Teske, Cockburn had to run through a gauntlet of different skilled postmen each night. Going up against every kind of center, from traditional back-to-the-basket players to outside-in stretch guys to athletic NBA prospects to crafty college upperclassman, there wasn’t a matchup Cockburn didn’t see, and the freshman was up to the challenge practically every time.

His biggest highlights of the season included 22 points and 15 rebounds at Purdue and 13 points and 10 rebounds head-to-head against Oturu, not to mention a slew of crow-energizing dunks and blocks throughout the campaign.

Whether or not Cockburn tests the professional waters after the season is unknown, but regardless, the freshman feels he still has a lot of room to improve no matter what his future holds.

“I have a long way to go,” Cockburn said. “I think I can really get a lot better (in) every aspect of the game. My timing, blocking shots, rebounding, scoring the ball, low post moves; I gotta grow in every aspect, so it’s just about putting extra hours in (and) making sure I get my work done, get my shots up and stay focused.”

Beyond the individual success of Cockburn or even teammate Ayo Dosunmu, Illinois is in uncharted territory for the Underwood era, as it’s now a near-certainty the Illini will be playing in the NCAA tournament for the first time since 2013.

What makes things especially interesting is this year’s field is wide-open as no teams have looked all that dominant, with many experts feeling 2019-20 is a talent-deficient season for college basketball as a whole. That means there will be ample opportunity for the Illini to make a run in the Big Dance, and they have the pieces to do so. With two experienced guards that can get to create their own shot and a slew of defensive, unselfish supporting cast players, Illinois has a roster very reminiscent to both the 2011 and 2014 UCONN teams, both of whom ended up cutting down the nets when it was all set and done. Not to mention, the Illini have a low post force in Cockburn, something neither one of those UCONN teams could lay claim to.

For context, as to just how wide open things are, Illinois is currently projected to be somewhere around a seven seed in the tournament, while Seton Hall is slated to be near a three seed, despite the fact the teams have the same amount of wins with Illinois holding just one more loss, proving how little room there is between the quote-on-quote elite teams and the rest of the pack this year.

If Illinois is going to make a run, it’s going to need to continue sticking to the script as of late: Make things physical and ugly, then rely on superior stars to pull it out in the end. While there may be a handful of teams that boast more depth or have better five-man lineups than the Illini, the number of teams in the country that would take their top three players over Dosunmu, Cockburn and junior Trent Frazier is a very small list.

“We play really good defense; we’re one of the top defensive teams in the country, and we take pride in that,” Cockburn said. “It’s just about going out there and executing and just playing as a team.”

Cockburn and co. can only take things one game at a time heading into postseason play, which means all attention will be turned to the winner of the Purdue vs. Northwestern-Minnesota game in the Big Ten Tournament, three teams Illinois went a combined 5-0 against this season. While the fact that the Illini are where they are is certainly a cause for celebration, the wild and unpredictable nature of the 2019-20 college basketball season has opened the opportunity for them to do serious damage starting this week.