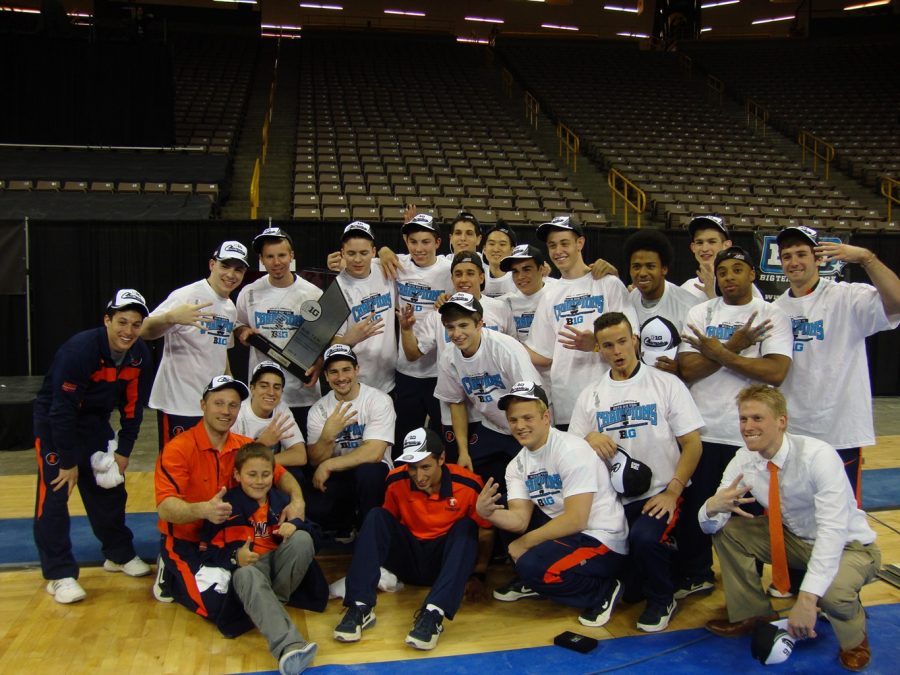 The 2012 University of Illinois Men’s Gymnastics team poses for a photo after winning the Big Ten Championships at Iowa City, IA on April 7, 2012.

The Illinois men’s gymnastics team achieved its greatest success of the 21st century in 2012, when the team won the NCAA men’s gymnastics championship. It was the team’s tenth national championship in program history and its first since 1989, ending a 23-year team championship drought. In addition, seven Illini earned a total of 11 All-America accolades in six out of seven events, and two Illini won event championships.

The Illini retained almost all of its 2011 roster for the 2012 season, losing only Ribeiro and two others to graduation and the transfer portal. The team was led by a group of seniors that included captains Anthony Sacramento and Kye Moe, reigning parallel bars champion Mizoguchi and Paul Ruggeri, a three-time national champion and seven-time All-American. Junior Austin Phillips served as another captain for the team that season, while fellow junior Yoshi Mori was expected to be a critical component of the team in the all-around competition. The team also welcomed five freshmen and a transfer that season, including C.J. Maestas, who was also expected to be a standout gymnast.

At the beginning of the 2012 season, head coach Justin Spring said his team was “the most talented team we’ve had in 20-plus years.” He knew the team had a good chance of winning the national championship, and his gymnasts knew it, too. Ruggeri made a comment in a preseason team meeting that Spring still remembers eight years later.

“He said, ‘If we don’t win it this year, I’m going to be embarrassed. This is the team. I’m not leaving this team without a national championship,’” Spring said. “Coming from one of your athletes, it’s a very powerful statement.”

“That opener, we just made a lot of mistakes,” Spring said. “We weren’t routine-ready yet because we were pushing such hard difficulty.”

Spring wanted his gymnasts to be prepared for an upcoming regular season meet against No. 1 Oklahoma, so he pushed them to perform difficult routines in practice and in competition. Although it didn’t pay off in the Windy City Invite, the team didn’t let the loss affect them too much.

“We knew that we were a better team than them (Ohio State) that year,” Spring said.

The Illini rebounded by winning the next six out of seven competitions, which included defeating Oklahoma in Huff Hall and avenging their loss to Ohio State. The Illini finished the regular season with a record of 12-2.

“I look back and I’m actually upset that we took as many risks as we did,” Spring said. “We thought we had to be so much better start value-wise to beat Oklahoma than we actually had to be.”

The Illini started their 2012 postseason in Iowa City, Iowa, at the Big Ten men’s gymnastics championships. The Illini broke several event records in the program’s history, both as a team and as individuals, en route to the team’s fourth consecutive Big Ten team championship and four individual championships.

Maestas won the Big Ten all-around championship and was the runner-up in still rings, floor exercise and high bar, earning him first-team All Big Ten recognition, Big Ten Gymnast of the Year and Big Ten Freshman of the Year accolades.

“First and foremost, it’s about the team. Coming away with the team title was indescribable,” said Maestas in 2012, per fightingillini.com. “The whole time I was going, ‘I just didn’t want to mess up for my team,’ and coming out with the all-around title was just the icing on the cake.”

Ruggeri received another high honor a week and a half later when he was named the 2012 recipient of the Nissen-Emery Award, awarded annually to the nation’s best senior male gymnast. Ruggeri became the fourth Illini in history to receive the award and the second Nissen-Emery gymnast Spring has coached after Luke Stannard won the award in 2010.

“It’s an honor just to be considered for the award,” said Ruggeri in 2012, per fightingillini.com. “Many Olympians have received the Nissen-Emery, so to be considered among that elite group of gymnasts is an incredible honor to me. I’m grateful to have the opportunity to be here and represent Illinois and be going down in the record books for the Illini.”

The night after winning the Nissen-Emery Award, Ruggeri and the Illini competed in Norman, Oklahoma, for the NCAA Championship, ranked No. 4 in the nation. For the qualifying session, Spring had such a strong team that he didn’t send his best gymnasts to compete. He wanted his best to be rested for the second day of competition.

“It was purely to get through qualifying and nothing more,” Spring said. “Put a score up, beat that fourth team in that session and move on to day two.”

The Illini did more than just beat the fourth-place team in the session; they placed first in the session, narrowly defeating still-No. 1 Oklahoma by five one-hundredths of a point with a season-high score of 356.25. On day two, although the Illini started strong on vault and parallel bars, they struggled on high bar, with both Ruggeri and Maestas suffering falls in an event in which Illinois was ranked first in the nation. The team also struggled on floor exercise and entered the fifth rotation of the competition – with the Illini on pommel horse – trailing Oklahoma by two points. The Illini rebounded by shattering the school pommel horse record, closing the gap between themselves and Oklahoma. Spring called this the turning point of the meet.

“They weren’t brought down after the downfall on high bar,” said Spring in 2012, per fightingillini.com. “That is the kind of perseverance and the mental toughness that this team had all year. They rebounded and kept pushing through.”

“This moment has been a long time coming,” said Spring in 2012, per fightingillini.com. “I have been a part of the NCAA for 10 years as an athlete, an assistant coach and now a head coach, and every time I was on a team that had a shot at this thing. For the first time, we pulled it off. We are no longer the team that should’ve done it for the last 10 years. We are the team that did it.”

In addition to winning the team national championship, Maestas and Mori earned All-American accolades as individuals in the all-around event finals, which happened concurrently with the team competition; Maestas was the runner-up. Nine Illini, including Maestas and Mori, also qualified for event finals the next night, during which seven of them won another nine All-American accolades to bring Illinois’ total to 11. Maestas and Ruggeri topped off Illinois’ success as national champions in still rings and vault respectively. Ruggeri finished his NCAA career as a four-time national champion, a nine-time All-American and a Nissen-Emery Award winner. Maestas, meanwhile, started his NCAA career as Illinois’ first-ever still rings champion, the first freshman since Ruggeri in 2008 to win an individual national title, and a three-time All-American.

With a team national championship, two individual champions and eleven All-American accolades, 2012 is easily the standout year for the Illinois men’s gymnastics team in both the Justin Spring era and the 21st century.