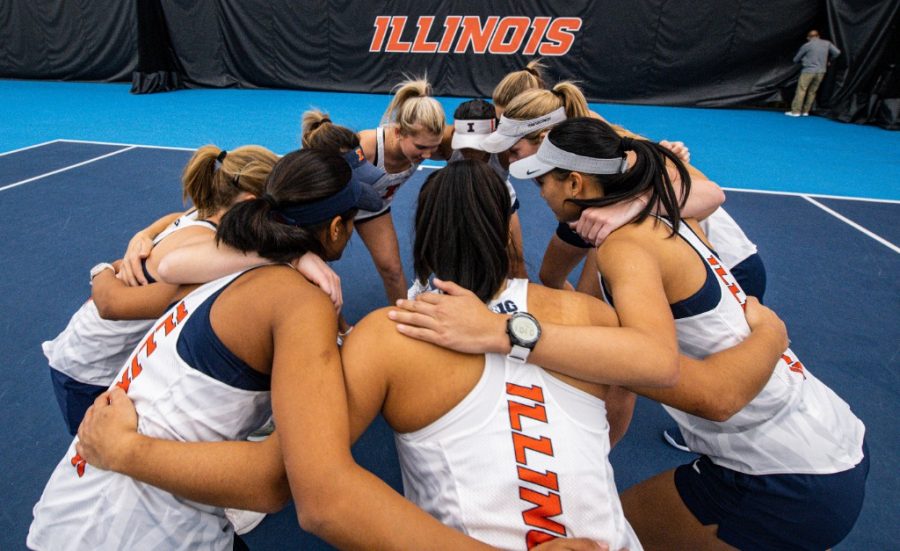 The Illinois Women’s Tennis team huddles before the match against Eastern Michigan on Jan. 26.

At the onset of the COVID-19 outbreak, the college tennis season halted almost instantly. Returning to play, however, is going to require a slow, methodical approach that may result in the sport looking different than it ever has before.

Fortunately, the NCAA has a blueprint to look off of in the form of professional tennis. Due to tennis being a sport that involves very low levels of contact between players, small scale events have popped up across the globe. With no central authority governing these events, they have been carried out with varying rule structures and precautions against COVID-19.

With the sporadic nature of these events, there have been both successes and failures. One such success has been the Ultimate Tennis Showdown, an event with modified tennis rules that also boasts strict social distancing measures such as no fans and the removal of customary handshakes.

While the physical game of tennis is likely to look similar when it comes back to the collegiate level, a change to limited or no fans will likely create the largest differing impact on matches themselves.

“The whole vibe of a tournament with no people there watching you is going to be totally different,” said Rajeev Ram, Illinois tennis alumni and Olympic silver medalist. “It’s going to be significantly worse. Obviously you enjoy having big crowds. It creates an unbelievable atmosphere whether it’s professional or collegiate level.”

While having no fans may seem like a negative change for tennis, according to Ram, even small crowds could present danger to the fans themselves.

“I think it’s more just about the entering and exiting of these people that are going to end up in a group, a large group when they don’t have to be,” said Ram. “I would feel uneasy going to something as a fan where I would be watching.”

Despite Ram’s concerns, one of professional tennis’s largest events, the French Open, tentatively plans on hosting a limited number of fans when it occurs later this summer.

Illinois women’s tennis head coach Evan Clark echoed similar concerns about playing without fans, as the atmosphere within the Atkins Tennis Center will likely be different. However, he also argued that it may be a net positive for the team as the Illini are often loud, vocal supporters of each other during matches.

“(Playing with no fans) will be tough, but it’ll put a lot on the teams to be loud and support each other,” said Clark. “It could make individual teams step up and be the crowd for each other more or less. Certainly, we’d love to have fans in there, but if we don’t, there could be a lot of positives as well. Get people out of their comfort zone. Get a little more team camaraderie.”

Illinois’ men’s tennis team also has a reputation of being loud and supportive of one another, so both tennis programs may be able to take advantage of the unique situation. Along with an eerie atmosphere that may be created without fans, home court advantage may become less impactful.

“I think that (no fans) would be a huge advantage against opposing teams,” said Clark. “Other places are so tough to play not because the courts are crazy or anything like that. It’s just the fans and it’s loud.”

One challenge when resuming play may be getting athletes back into game-shape, as the typical flow of a season was ruined due to the sudden cancellation, and since then many gyms have been closed, giving athletes limited options to stay conditioned.

“I think it’s going to be very hard,” said Ram. “I think especially (for) us as tennis players, we normally don’t have this kind of a break. We have an offseason at the end of the year that’s normally 6 weeks long. It’s been way longer than that already. We’re going to see the effects of that.”

On the college level, the schedule is a little different as play isn’t as constant year-round, but the loss of consistency and conditioning will likely have a similar impact. Oftentimes the Illinois tennis teams take trips that help them get into game shape prior to the season, but those may not be a possibility heading into next year.

Ram shared a large concern with the potential for injury to players who ramp up too quickly after spending so long away from the game. When college tennis resumes, teams will have to take into account the difficulty of playing after such a long break and adjust accordingly.

“I just think that we have to make sure that everyone’s cautious and is appreciative of how difficult and how powerful this pandemic is,” said Ram. “Just because we’re getting impatient doesn’t mean anything changed. We have to look at the facts and understand what’s actually happening. Every sport, whether it be professional or collegiate or needs to do that. The last thing we want to do is start to put people at risk to something that could potentially kill them. It’s just not the right thing to do. I’m all for sports coming back when it’s safe, we just need to know when that actually is.”