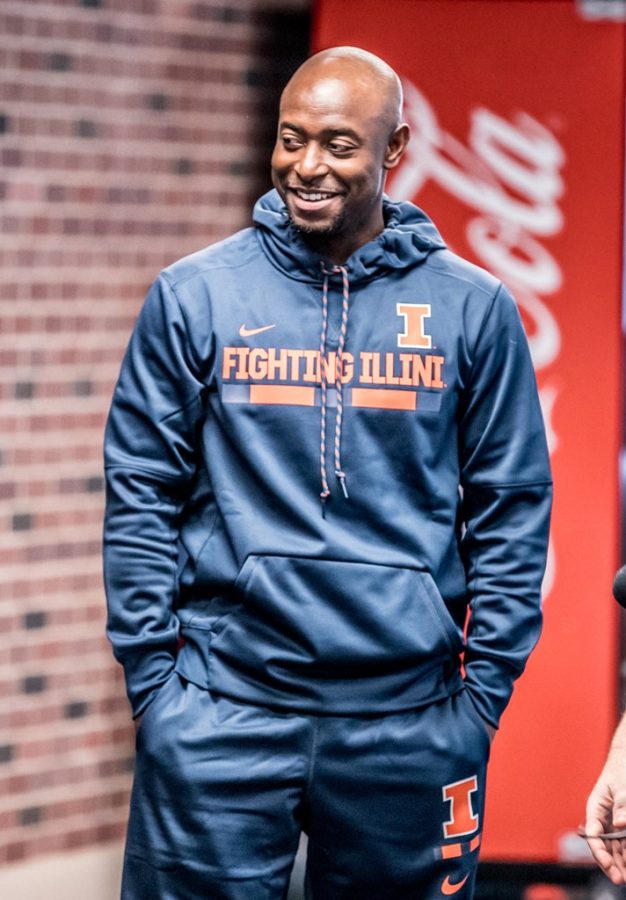 Cory Patterson meets with media after being hired on Jan. 26, 2018. Bret Bielema elected to keep Patterson on his staff as the running backs coach.

While many of Lovie Smith’s staff are expected to not return in 2021, Bret Bielema has decided to go in-house to keep tight ends coach Cory Patterson on board for the next era of Illini football.

While Patterson is staying with the Illini, Bielema has been moved to running backs coach, which may push assistant coach Mike Bellamy out of the program.

“After meeting Cory a few weeks ago, I came away impressed with his passion for coaching and the Illini family,” Bielema said in a press release. “During our transition, he will now coach our running backs and work with us in recruiting to find the individuals who can best help us win championships. We couldn’t be more excited to have Cory return as a member of our coaching staff and for him and his family to remain here in Champaign.”

Patterson, a St. Louis native, was hired by Lovie Smith in 2018 after coaching high school football for nine seasons, including being the head coach of Trinity Catholic, the alma mater of Isaiah Williams.

The Lindenwood University graduate’s connection to high school coaches in the area allowed the Illini to develop a recruiting base in St. Louis, which Bielema has an eye on continuing to develop during his tenure.

Since Patterson’s arrival, the Illini have signed players such as running back Reggie Love, wide receiver James Frenchie, Jr., offensive linemen Josh Plohr and quarterback Isaiah Williams. No player currently from St. Louis arrived before Patterson did in 2018.

With a new offensive coordinator and offensive line coach already hired, Bielema still has a ways to go before completing his offensive staff. With Patterson, who may be the only carryover from Smith’s staff, moving to running backs coach, the Illini will look for a new tight ends coach.