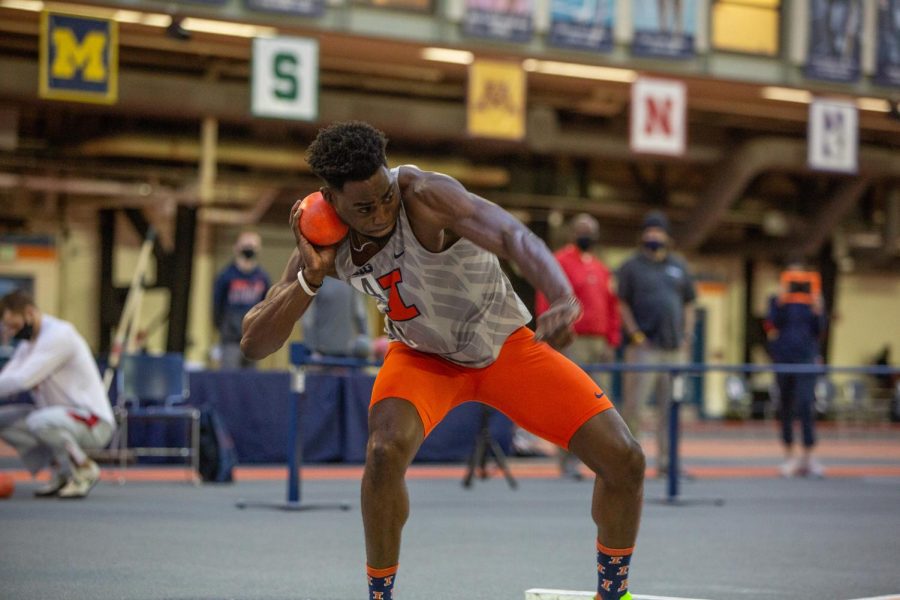 Sophomore Alexander Babbington competes in the shotput event during the Heptathlon at the meet at the Armory on Friday.

After being on the road for back-to-back weeks to kick off the 2021 season, the Illini hosted the Illini Big Ten Multi-Meet while the cross country team was in Shelbyville, Indiana for the conference championship.

For the women’s cross country team, the team had a steady list of performers that placed the Illini in the upper half of the competition.

The No.17 ranked team in the nation was led by senior Rebecca Craddock, who finished ninth with a time of 20:45.5 in the 6k race against the Big Ten’s finest.

“Rebecca is a tremendous leader for our program,” head coach Sarah Haveman said in a press release. “There are not very many student-athletes that can say they have led their team at the Big Ten XC championships for four straight years.”

Besides Craddock, the Illini placed four women in the top 25, with the difference between them only being separated by 13.8 seconds.

“They continue to work to take our program to new levels and they are having fun doing it,” Haveman said.

In the final standings, the women finished third in the championship behind only Michigan State and Minnesota, respectively.

The men’s team did not fare as well as the women, although certain athletes had stand out performances.

After stealing the show last week in Iowa City last week, redshirt senior Jon Davis put on another show in the 8k race, finishing with a time of 24:01.8. However, despite his performance, he fell short of first place by only .7 seconds, with Nebraska’s George Kusche taking top honors.

While losing by less than a second is frustrating, Davis’ talent was on full display. The third-place finisher was 9.9 seconds behind him.

Davis’ performance, though, did not rub off on his fellow teammates. Tyler Cushing, the highest-ranked Illini besides Davis, finished in 31st place with a time of 24:50.

Overall, the Illini finished sixth out of ninth in the championship with the Wisconsin Badgers taking home first place. Despite the result, Haveman found positives from the event.

“We are excited to build upon this,” Haveman said. “It was exciting to see freshmen Tyler Cushing and Will Giblin both step up into scoring position.”

For the track and field portion of the weekend, Illinois hosted a heptathlon and pentathlon with sophomore Alexander Babbington and junior Lucy Lux-Rulon representing the Illini.

Babbington excelled in the 60-meter dash and the high jump, finishing first and second in the events, respectively, helping the sophomore offset his other performances in the 60-meter hurdles and pole vault, where he finished seventh in both categories.

Overall, Babbington placed seventh overall in the meet, finishing with a total of 3,886 points while Nebraksa’s Zach Podraza won the heptathlon with 5,130 points.

For the women’s side, Lux-Rulon struggled in some events, placing her 13th overall on the day. Lux-Rulon did have some high points, however, with strong performances in the 60-meter hurdles and long jump, where she finished in the top 10 for both.

The cross country team is now off for over a month as they prepare for the national championship in Stillwater, Oklahoma. The track and field team, however, only has a week off before traveling to Lincoln, Nebraska for another Big Ten meet.