Notes: Illinois back in win column with 81-76 victory over Northwestern 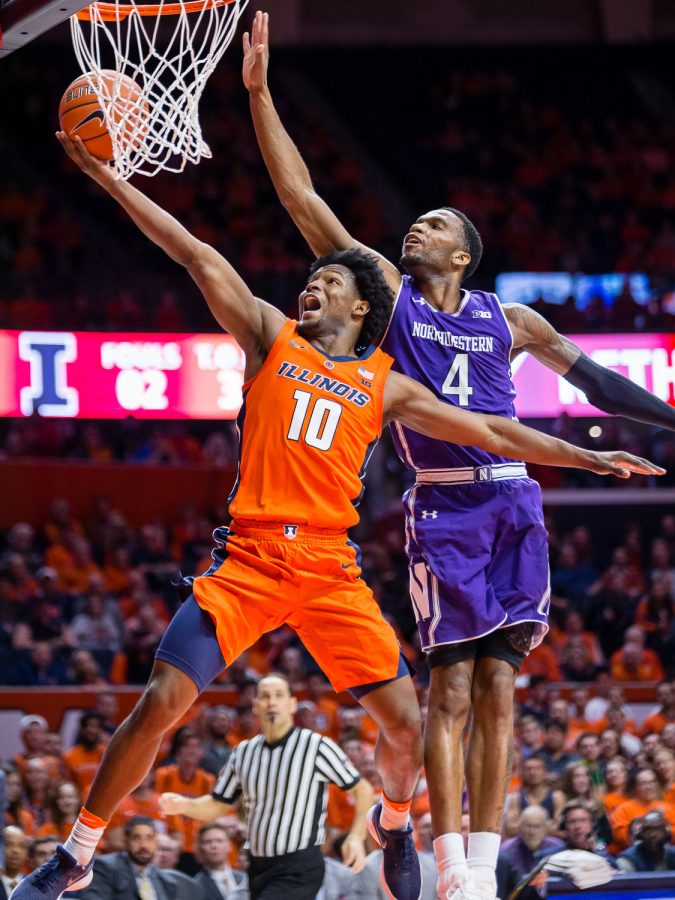 Illinois guard Andres Feliz goes up for a layup during the game against Northwestern at the State Farm Center on Sunday. Feliz put up a career-high 26 points to help the Illini defeat the Wildcats, 81-76.

Illinois guard Andres Feliz was nonchalant in the postgame press conference, attributing his career-high 26-point performance to his teammates and being aggressive.

Make no mistake though: Feliz was instrumental in helping the Illini escape the State Farm Center with an 81-76 win over a wallowing Northwestern team that has lost 10 straight games.

Head coach Brad Underwood started Feliz at Purdue, selecting him over sophomore guard Trent Frazier, but had Frazier back in the starting five and Feliz back on the bench against Northwestern on Sunday.

But Feliz found his groove and quickly made his mark.

The Guachupita, Dominican Republic, native went 5-of-9 from the field and scored 16 of his 26 points on a 16-of-17 free throw shooting clip. He also added five rebounds, three assists and three steals.

“He settles us. He’s got a poise about him that I really like,” Underwood said. “It didn’t take me long to get him in the game tonight either, even though we didn’t start him. He’s been really good in that role.”

Feliz consistently slashed past defenders, bolting his way into the lane where he would elude multiple defenders at times and draw contact.

For him, it was apparently just a matter of taking the game’s situations into account and doing what he does best: aggressively and relentlessly getting to the basket.

“I’ve been a bit more aggressive,” Feliz said. “Credit to all of my teammates, they were able to find me in transition or when I was open.”

Feliz’s previous career-high, 19 points, with the Illini came in a narrow, 77-74 win over the University of Nevada-Las Vegas on Dec. 19. Like then, Illinois benefitted from each one of his explosive bursts to the hoop.

Freshman guard Ayo Dosunmu, who added 12 points of his own, emphasized the importance of being able to rely on someone like Feliz coming off the bench.

“It’s better for our team because they can’t just lock in on me, Giorgi (Bezhanishvili) and Trent,” Dosunmu said. “When he gets going, it’s really a bonus for us. He gets in there, he can pass and he can finish. Also, he comes off the bench and gives us a spark off the bench.”

Dosunmu thinks Feliz’s motor is part of what makes him a challenge for opponents, especially when he comes into the game with plenty of rest while opposing starters may be winded.

“When he comes off the bench, it’s really hard for the defenders to come out of the motions of being starters and coming out of the game,” Dosunmu said. “Then (Feliz is) coming in fresh. He’s attacking and getting to the line. That really gave us a spark.”

Underwood made a reference to an old basketball thought that it takes longer for junior college players to adjust to the Division I/power conference level and applied it to Feliz.

Though Feliz was pretty well-regarded by Underwood and his staff coming in, he acknowledged it has taken the junior some time to settle in and reach his potential.

“He was only 10, 11 games in (then),” Underwood said. “Kind of the old myth is that it takes junior college players a semester to get acclimated and understand what we’re doing. Now he’s confident. He forced his way through his first year and you’re seeing a guy that knows where he can pick and choose his spots. He’s more comfortable in the offense and he was terrific tonight.”

Not one to go very in-depth when talking to the media, Feliz briefly walked through his approach on Sunday.

“(I was) staying aggressive and being smart with the defenders, seeing what they give me,” Feliz said. “If I see him backpedal, now coming in front of them, I have the opportunity to get to the basket. By being aggressive, that’s how I’m thinking.”

It’s difficult to dispute the importance of freshman forward Giorgi Bezhanishvili to this Illinois team.

The Georgian certainly has made a monumental impact on numerous occasions (see his record-breaking 35-point performance against Rutgers).

But since that game, Bezhanishvili has had some forgettable performances, including on Sunday night.

He finished with 12 points, tying with Dosunmu for second on the team, but Bezhanishvili was not as active or involved in things offensively for Illinois and has shown a tendency to turn the ball over (four).

It took until the 17:23 mark in the second half for his first shot, a missed hook.

Then there was a hook-and-hold call on a made Northwestern 3-pointer that gave the Wildcats a chance for an eight-point swing when they were clawing their way back into the game.

Then there were two missed 3-point attempts, neither of which were close to falling down the cylinder.

“Giorgi’s capable of doing that, he shoots them in practice,” Underwood said. “He hasn’t been doing it (lately in games). I don’t know if it was frustration, I’ll have a conversation with him about it. Give (Northwestern’s Dererk) Pardon a lot of credit as an upperclassman that’s smart and a really good defender.”

Bezhanishvili did help out the Illini in other areas, including his perfect 8-of-8 mark from the charity stripe and his seven rebounds (second to Aaron Jordan’s 10).

“I’m just proud that Giorgi stepped up and made his free throws tonight,” Underwood said. “They were needed.”

Bezhanishvili has struggled against some of the Big Ten’s more lanky, powerful big men, though he has also punched above his weight against others, like Ohio State’s 6-foot-9-inch, 270-pound Caleb Wesson (13 points, 6-of-9 on Feb. 14).

Against Purdue’s Matt Haarms, a monster, 7-foot-3-inch sophomore, Bezhanishvilli struggled mightily, scoring just two points on 1-of-4 shooting and fouling out in 22 minutes. He also had two turnovers and just three rebounds (though not too far below his 5.1 per game average).

In Madison against Wisconsin’s Ethan Happ, Bezhanishvili put up 10 points on 5-of-11 shooting, but turned the ball over five times and had to spend some time on the bench with four fouls.

Penn State’s Mike Watson gave the Illini freshman trouble, too, as the powerful center went for 10 points, 12 rebounds and five blocks against Illinois, limiting Bezhanishvili to 5-of-14 shooting, though he hauled in a team-high 10 rebounds and added 16 points. Underwood isn’t surprised by the bumps in the road for a player he has spoken of quite highly throughout the year.

All in all, it’s the turnovers that most peeve the second-year Illinois coach.

“I’m frustrated with his turnovers because he’s a better player than that,” Underwood said. “You don’t see that. The first possession of the game, he throws one behind his back. He might complete that in practice when it’s against the walk-ons, but in a Big Ten game, that’s not going to work. We live with some of that with Giorgi.”

Winners at the line (for once)

Illinois came into Sunday tied at No. 266 in the NCAA in attempted free throws, with 483 on the year.

It’s something Underwood has consistently not been happy with but against Northwestern — ironically also tied at No. 266 in free throw attempts — Illinois got to the line 38 times and sank a season-high 33 (86.8 percent).

Underwood remarked the 33 made free throws had to be a season record, and he was right — by a lot.

The Illini had not attempted more than 30 free throws in a game all season, with the most attempts coming with 28 against Penn State on Feb. 23.

Illinois hit 10 more free throws than in its best prior performance from the line, a 23-of-27 (85.1 percent) showing against Ohio State on Dec. 5.

Feliz, who led the team with his 16-of-17 mark, said it’s something that has been a goal for the team for some time.

The made free throws more than made up the five-point margin of victory.

It was a welcome sight for a group that, as recently as last week, Underwood said was too reliant on the three-ball (Illinois took 29 three’s against Penn State, making just eight).

Frazier added to Feliz and Bezhanishvili’s impressive showings at the charity stripe with a perfect 6-for-6 mark which made up more than half of his 11 points.

Dosunmu, for his part, only went 1-of-3, but was well aware of how helpful it can be down the stretch.

Pushing the ball up the court quickly and forcing defenders into making tough decisions at the last second also helped the team get to the line on Sunday, Dosunmu believes.

“That’s what we wanted to do,” Dosunmu said. “We always want to get to the foul line. We know we play good defense; they’re taking tough and long shots. Long shots equal long rebounds, so we just wanted to get out and push, then get easy baskets.”