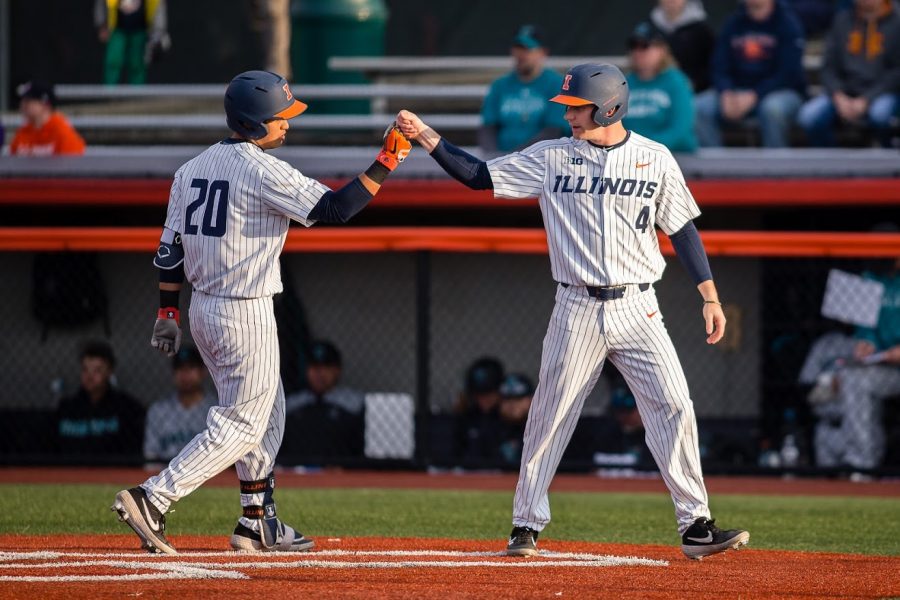 After snapping its four-game losing streak on Tuesday, Illinois kept up the pace with another close victory at home, defeating nationally ranked No. 19 Coastal Carolina 4-1.

The script to Wednesday’s game followed Tuesday’s very closely: The Illini trotted out a freshman to start, then completely shut the Chanticleers down with their bullpen while manufacturing runs along the way by any means possible.

Rather than freshman Aidan Maldonado, who took the hill Tuesday, Wednesday belonged to another freshman: Nathan Lavender.

The freshman southpaw not only reached the highest pitch count of his young career — throwing 84 pitches — but also retired more batters than ever before, getting the better of 13 Coastal Carolina hitters.

“Warmed up, felt well, arm was a little tired from when I threw on Saturday,” Lavender said. “You just gotta go out there with the mentality (of) sometimes you have it, somedays you don’t. You just gotta find a way to grind it out, get it done.”

Lavender carried a shutout into his final inning of work, but after allowing a single with one out in the fifth, the freshman was pulled and the runner eventually scored.

Reflecting on his performance, Lavender felt he was able to get in a groove as the game progressed.

“The main thing is you really have to set a pace,” Lavender said. “You gotta find your rhythm. Struggled a little bit the first couple innings, then got in that rhythm and maintained it. I felt fine.”

Head coach Dan Hartleb gave Lavender a positive review after his first start on March 20 at St. Louis, and the freshman has only improved since.

In the three games since, Lavender is 2-1, allowing just one run and six hits while striking out 12 across two starts and one relief outing.

“I think (Lavender’s) done a good job,” Hartleb said. “He continues to throw more strikes. Just had more of a calm about him today. He knew what to expect going out there. I think each and every outing, he’s made great strides.”

Hartleb has stressed the importance of the pitching staff keeping walks down, and the unit did so Wednesday night, allowing just four free passes and just one after Lavender left the game.

As a whole, Illinois relievers covered 4 2/3 innings of shutout work, with a different arm getting it done each inning. Junior Garrett Acton picked up his 10th save of the season, striking out the side to closeout the 4-1 Illini victory.

Offensively, a relatively cold night meant the ball wasn’t going to carry as much; therefore, Illinois had to find offense in nontraditional ways.

With the game tied 1-1 in the seventh, senior outfielder Michael Michalak led off with a single. Junior shortstop Ben Troike followed up with a double but the ball hung up a little too long and Michalak could only get to third. Redshirt sophomore Andrew Dyke was inserted for Michalak as a pinch runner and scored on a wild pitch. After a Branden Comia walk, junior second baseman Michael Massey skied a ball to left that traveled far enough for Troike to tag up and score.

In the following inning, senior outfielder Jack Yalowitz led off with a walk. He then stole second and would come around to score on a fielding error.

On nights where the bats are quiet, the Illini need to find alternative ways to bring runners home if they want to compete in the Big Ten.

“You have to take advantage of every opportunity and we’ve done that on a number of occasions this year,” Hartleb said. “You need, obviously, to get guys on base (and) get them in scoring position, but then you have to come up with the big hits or you have to be able to score without getting hits. We’ve done a little bit of everything all year and it puts a lot of pressure on the opponent.”