Home of the Braves: Illinois falls to Bradley, 8-12 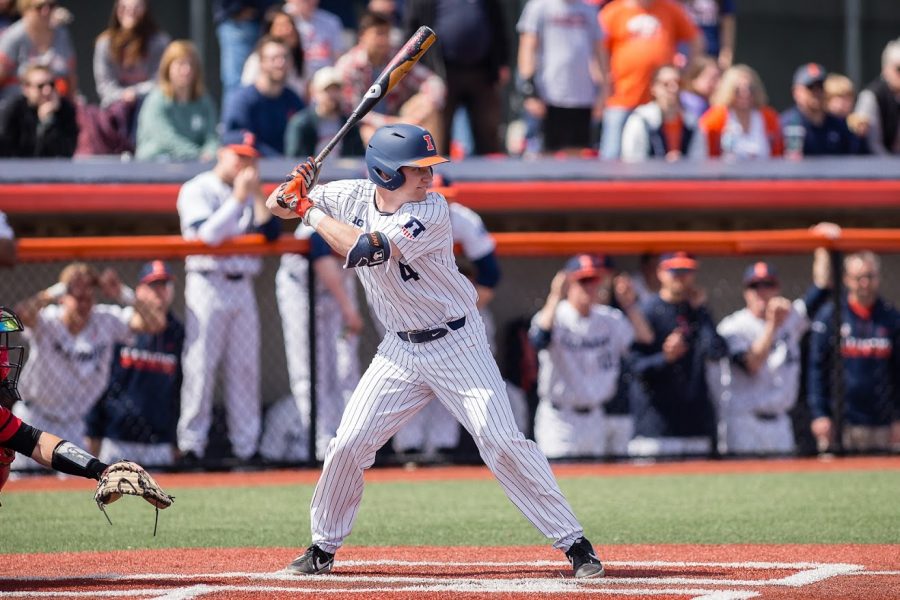 Illinois shortstop Ben Troike waits for the pitch during game one of the doubleheader against Maryland at Illinois Field on April 6. The Illini won 5-1.

After taking the weekend series against Minnesota, the same problems that have plagued Illinois all season surfaced once again against Bradley on Tuesday.

The Illini started the game with the lead, going into the top of the third inning 4-1, then swapped leads through the next frames and jumped out in front again, 8-7, going into the seventh inning. The offense jumped to life early, knocking three runs in the first and one in the first.

However, freshman starter Aidan Maldonado slowly handed the lead back to Bradley as he lasted just 3 1/3 innings, allowing seven runs and walking five.

The Illini offense bailed Maldonado out and took the lead in the fourth thanks to three home runs from senior Grant Van Scoy, freshman Jacob Campbell and junior Michael Massey. It was Massey’s first game back after missing the weekend series against Minnesota due to injury.

“We kinda hit a rough patch about halfway through the season,” said junior shortstop Ben Troike. “But I thought especially tonight over the weekend, we put some quality at-bats together. This lineup is really getting back to where it needs to be.”

The lead didn’t last though. Illinois held the one run edge for two innings thanks to clean frames from relievers junior Ryan Schmitt and redshirt senior Sean Leland.

But the final three relievers couldn’t close out the win for Illinois. Redshirt senior Quinten Sefcik gave up the game-tying homer to Bradley’s Connor O’Brien.

Things didn’t get better when sophomore Josh Harris came into the game. He recorded just two outs and was responsible for three runs, two of which came on O’Brien’s second home run of the game.

Junior closer Garrett Acton was called on to stop the fire, but he was the one who gave up the homer after Harris left two on and at 12-8, the game was essentially decided.

“We did not pitch well at all,” said head coach Dan Hartleb. “You look (at) starters, relievers (and) we got ourselves in binds most times because we couldn’t throw multiple pitches for strikes. When we did throw something over the plate, it wasn’t located well. We’ve gotta clean that up. We just had no consistency on the mound.”

Next up, Illinois will host Penn State in a three-game series at Illinois Field. It will be an opportunity for the Illini to get back on track since the Nittany Lions are 17-15 on the year and have only one conference win so far.