Illini snag two against No. 22 Michigan 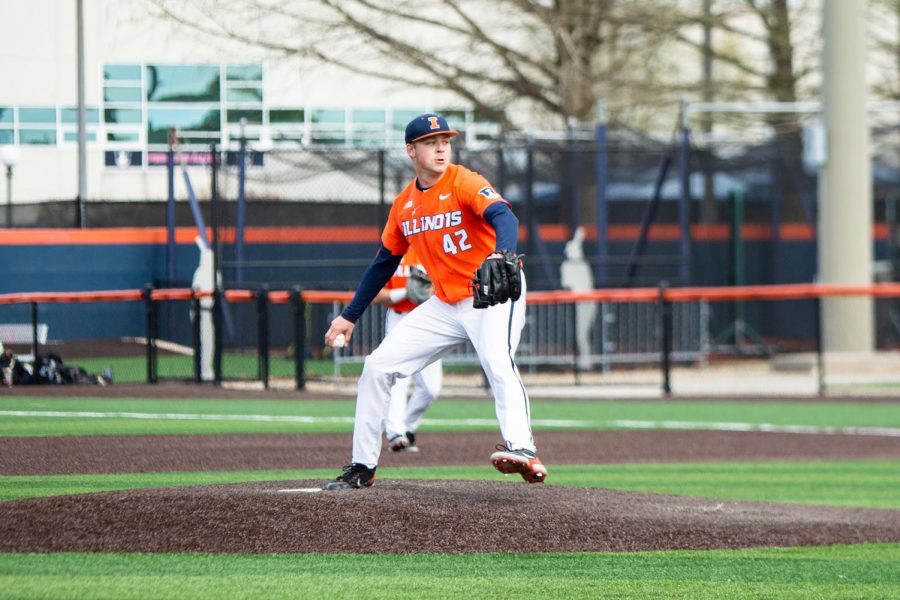 Sophomore Riley Gowens pitches against Purdue on April 19. The team prepares for their home matches against Maryland this upcoming weekend.

The Illini baseball team had to adapt quickly heading into this weekend’s pod play. Hours before play was set to begin, Northwestern pulled out due to health and safety concerns leaving the Illini to face No. 22 Michigan in a four game series spanning just two days.

Illinois came away splitting their final pod of the season 2-2 with No. 22 Michigan.

“I thought we did a really good job from an offensive standpoint,” head coach Dan Hartleb said. “We found a way to get two big wins. In the two games where we did not do a good job pitching wise, we still found ways to put pressure on Michigan. I thought we competed very well even when we were down.”

Game one saw the second most home runs of the season (4) sent off of the bats of Hampe, Sarver, McDonald and Raper.

Michigan would put up a quick two runs in the top of the 1st while the Illini wouldn’t rally until the bottom of the 5th. Kellen Sarver and Jackson Raper would send the dugout into a frenzy with a pair of home runs in the top and bottom frames of the inning giving the Illini their first lead of the afternoon.

While the Wolverines tied the seven-inning contest in the top of the 6th, Illinois answered assertively as Cam McDonald stepped to the plate with a full count. The 6’5 power hitter homered to left field for the game winning run – his third home run of the season after combining for just one in his first two seasons with the Illini.

LHP Cole Kirschsieper has proved to be quite the closer for the Illini this season, sliding out onto the mound in the top of the sixth. Kirschsieper would strike out the final two batters of the game, extending his scoreless streak to 10.2 innings.

40 minutes later, the Illini trotted back out to Miller Park to face the Wolverines once again. The lack of rest and inexperienced bullpen didn’t fare well for the Illini in game two, giving up a total of 18 runs – 23 runs on the day.

Saturday afternoons contest saw 11 total pitchers take the mound for their respective teams. The Illini bullpen struggled to curb the nationally ranked No. 22 Michigan after allowing just four runs a few hours prior.

Following an RBI single from Janas, the Wolverines would score 11 unanswered runs over the next four innings. Illinois tried to keep the game in reach with a five-run 5th inning however the consistency behind the Wolverine bats fared to be too much – going 21-for-46 (.456) during game two. Michigan would go on to score seven more runs over the remaining four innings putting the game away for good at 18-8.

“This weekend we walked too many people and we were behind in the count on a consistent basis, time after time. It’s very tough to pitch and be successful when you’re behind every count,” Hartleb said.

Game three’s seven-inning outing saw a sparkling display of defense with a 13-7 win over the Wolverines. Jackson Raper’s superb outing at the plate secured the Illini win placing them back at .500 – starting the game with a two-run homer .The Wolverines would respond with three solo home runs in the bottom of the 4th.

The Illini exploded in the top of the 5th with a five-run inning. With their backs against the wall the Illini batters remained composed at the plate – all runs came with two outs on the board including Taylor Jackson’s first career triple. The Chicago native went 2-for-4 on the day and broke out for four runs and two RBI’s.

Raper tore up Miller Park in Sunday’s game one going 4-for-5, tacking on seven RBI’s and hitting for the cycle in the top of the seventh – the first since Justin Parr in 2013. The third baseman also added two magnificent defensive plays at third, one in the bottom of the 5th – making a diving play and throwing the ball to first with his back firmly placed in the dirt beneath him.

The final three games of the weekend found the Illini striking first, scoring a run in the first frame of each game. After starting the pod 2-for-10, Justin Janas sparked an early lead in Sundays final outing with an RBI single – Sarver followed with his own rocket RBI in the next appearance giving the Illini an early 2-0 lead.

After running through the top half of their bullpen, Illinois placed Aidan Maldonado to start on the mound for the final game against the Wolverines. Michigan would then explode against the sophomore with a seven-run inning in the bottom of the 1st– their fifth inning of the series that put up four or more runs.

“Some guys need to just believe in themselves. They need to take the things that they do in practice and in the bullpens, they need to go to the mound to get hitters out,” Hartleb said.

The Illini experimented with a multitude of their young pitchers on Sunday, placing a total of five pitchers on the bump in their final outing in Evanston. No. 22 Michigan put the game out of reach with a six-run inning in the bottom of the 6th.

Michigan’s run production proved to be too much for the young Illini bullpen as they put up 10+ runs in two of their games – 18 on Saturday and 19 on Sunday. The five Illini pitchers combined for 18 total errors in game four.

The Illini (15-16) walk away with a 4-4 season split against No. 22 Michigan and rank 8th in the conference with just four weekends left in the regular season.

Illinois will host Maryland in their first matchup of the season next weekend in Champaign.