Illini take series win over Iowa decisively in back half 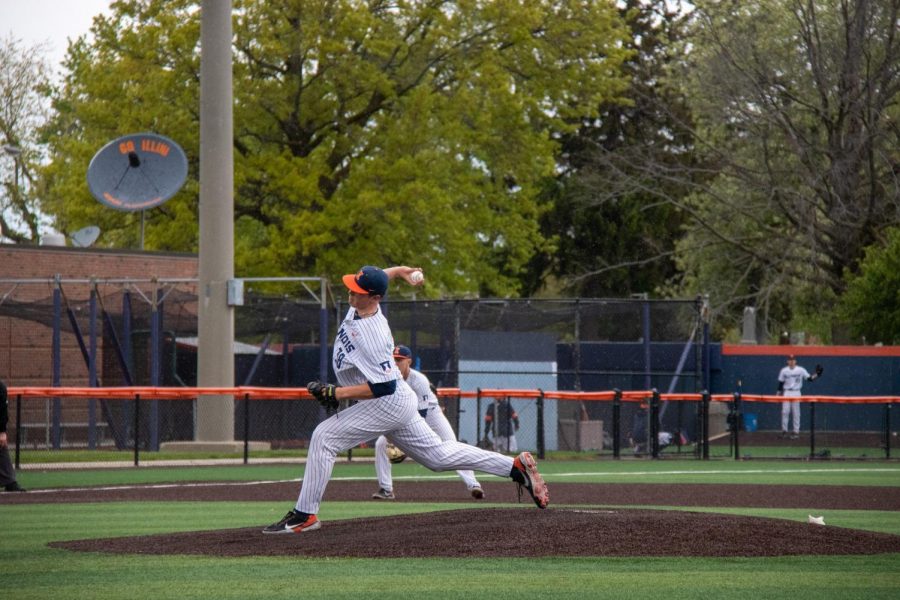 Freshman Clayton Johnson pitches on May 7 against Maryland. The team is set to play against Indiana this Tuesday.

The Illini found a lively, emphatic environment at Duane Banks field this weekend as Iowa allowed 1,022 fans into the park for game one – the second largest fan attendance the Illini have seen in a game this season. The largest followed the next day with a sellout crowd of 1,165 people.

This weekend provided a maturation point for the Illini baseball team.

In a Friday night matchup that featured both of the teams aces on the mound, the Illini dropped their first game in a heartbreaking 5-4 loss to the Hawkeyes.

Nathan Aide recorded his first home run of the season in the bottom of the fifth, a solo shot to right center field tying the game at one a piece.

The eighth inning however, became the deciding factor with Iowa leading 2-1.

With two outs on the board, Justin Janas and Ryan Hampe drew back-to-back walks before Kellen Sarver lined a game-tying run batted in ground-rule double, scoring Janas. The Illini came up with a three-run rally in the eighth following Cam McDonald’s go-ahead two-run single giving the Illini a two-run advantage.

The lead was short lived. Iowa’s crowd was strident down the stretch. Following a walk and RBI double, the Illini’s decisive reliever Cole Kirschsieper took the mound for the remainder of the contest.

Kirschsieper pressed for three straight fly balls, but one fell in for an RBI double that tied the game. With two outs on the board, Ben Norman struck a go-ahead RBI triple that gave the Hawkeyes the win in game one.

Nate Lavender stole the show Saturday afternoon throwing an excellent 6.0 innings on the mound for the Illini. Before the weekend Lavender said the staff had been timid as of late, struggling to attack batters at the plate. He was anything but that on Saturday, grabbing his sixth win of the season – now tied for the second most victories in the Big Ten.

Lavender threw a career high 13 strikeouts while allowing just one run – surpassing 100 career strikeouts on the 10th. The southpaw has struggled with efficiency this season, not throwing to more locations in the strike zone. He commanded his breaking ball extremely well, remaining ahead of the count consistently throughout his appearance.

“We needed a big pick me up after the way things unfolded last night,” said head coach Dan Hartleb postgame. “Nate’s been a little bit inconsistent this year, and he made a major adjustment and went out and pitched outstanding today.”

Hartleb was expressively unhappy with Friday’s outing saying his team “flat blew it” down the stretch. The bats responded with assurance Saturday, dominating in the top of the third with a six-run inning.

In total, 12 Illini batters took the plate in the bottom of the third. Singles from Raper, Jacob Campbell and Aide scored four Illini base runners. Campbell (2-for-5, R, 2 RBI) was solid on his offday behind the plate. His double in the top of the third scored Janas and Raper giving the Illini a 6-0 lead.

The Illini offense exploded once again in the top of the seventh, scoring five runs on just two hits.

Sarver (2-for-5, 2B, 3 RBI, 2 R) got the ball rolling with a double to left field, scoring McDonald who singled to centerfield in the top of the frame. Every player in the Illini’s starting lineup made a plate appearance in the inning – one filled with a grandiose amount of bases loaded scenarios.

In the opposing bullpen however, walking batters was a constant. A season-high 13 batters were walked in the afternoon, leading to eight Illini runs.

Eight Iowa pitchers took the mound Saturday, four of which all pitched in the bottom of the seventh.

The Illini garnered a boatload of quality at bats at the plate, doing a majority of their damage in their 14-1 victory over Iowa after they received walks.

“It was good to see our guys do that,” Hartleb said. “We’ve been pitched to very well as of recent games and haven’t got a lot of hits. But you know, we did a great job with runners in scoring position today, both getting hits and laying off pitches and got a number of walks that led to runs so all the way around, we played very well today.”

The Illini struck first once again Sunday afternoon following an RBI double that scored Sarver in the top of the second giving them a 1-0 lead.

Janas took an immense leap toward battling for the Big Ten batting average title going 5-for-5 from the plate.

“He stays inside the ball, doesn’t strike out very much,” Hartleb said postgame Sunday. “If he can continue to mature and continue to learn and gain some more strength, he’s going to be a really tough out for years to come past this level.”

The fifth inning this time around proved to be where the Illini did most of their damage. Ryan Hampe tacked on his sixth home run of the season in the top of the fifth – a two run homer – giving the Illini a decisive two run lead 4-2.

“For our guys to come back and play the way they did on Saturday and then again today, it shows me a lot,” Harleb said. “It really does. It is a lot of maturity, it shows me some toughness and shows me we’re making a lot of progress so really proud of the group.”

Illinois’ first midweek of the season will be played this coming Tuesday as a makeup for the April 11 postponed contest against Indiana. The Illini will face off against the Cornhuskers in Bloomington at 2:00 p.m.