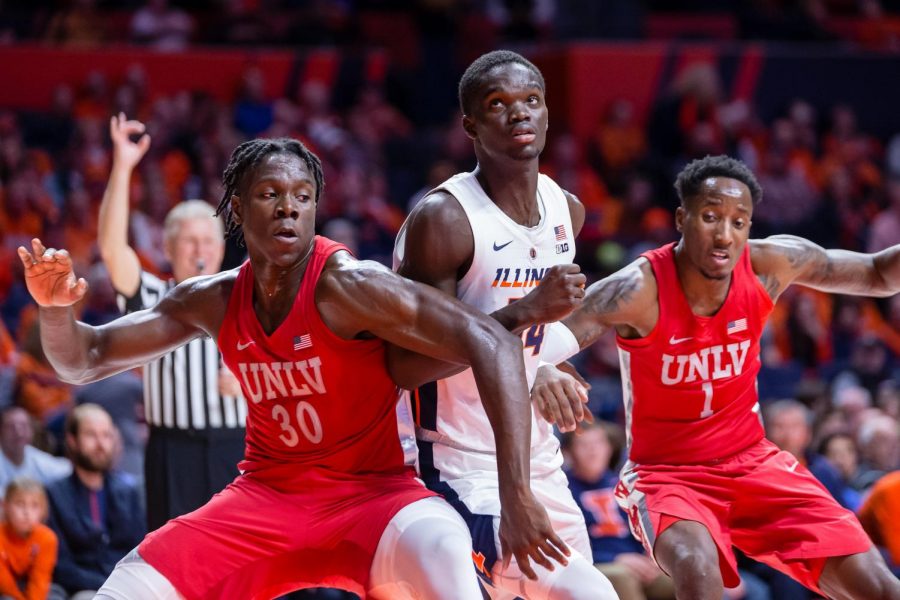 Illinois center Samba Kane fights for a position to rebound a free throw during the game against UNLV at the State Farm Center on Saturday. The Illini won 77-74.

After a three-game losing streak for the Illinois men’s basketball team, something had to change.

The change came in the seven-foot form of freshman Samba Kane.

After fellow freshman Giorgi Bezhanishvili started off the game slowly, Kane checked in with 18 minutes to go in the first half and immediately caught and finished an alley-oop, sparking a career-high eight-point night to go with two impressive blocks in 16 minutes after Illinois beat UNLV 77-74.

“He stepped up in a major way tonight,” junior Kipper Nichols said. “He’s a big-time player, expect a lot from Samba Kane in the future.”

Along with Kane, the Illini got a strong performance from the rest of their bench, collecting 29 bench points to UNLV’s 20, led by a team-high 19 points from graduate student Andres Feliz.

Feliz and Kane sparked Illinois to a six-point lead at the half.

Having a lead at the half was nothing new to this team, but coming out of the half strong was. The Illini used a well-rounded attack, including a 6-0 Feliz and Kane spurt, to take a 13-point lead into the under 12-minute timeout.

The Illini continued to hold a lead late into the second half, but as they tried to close the game out, the Runnin’ Rebels kept pace. UNLV got in the double bonus with just under eight minutes to go and used that combined with an overly passive Illinois offense to have a shot to tie at the end of the game, down three.

However it was a day of changes for Illinois, and that meant they finally closed out a close game. Feliz made a steal after a UNLV player couldn’t decide whether to shoot or pass a potential game-tying three-pointer and turned the ball over. The junior then dribbled out the clock.

“What happened was very important for us,” Nichols said. “On top of getting the win those last three or four minutes we grew up a lot as a team.”

Underwood said even if it wasn’t pretty, it was a needed win, especially for a team as young as Illinois.

Even with the expansion of Kane’s role, the Illini continued to struggle on the glass, losing the rebounding battle and giving up 21 offensive rebounds. Unlike past games, those extra possessions didn’t result in makes, as Illinois held UNLV to under 35 percent shooting from the field and 30 percent from three.

“We did a much better job in transition defensively,” Underwood said. “We made them finish over a contested hand.”

With the win, the Illini moved to 3-7, but with the easiest stretch of schedule ahead of them in the next few weeks, with the Braggin Rights game against Mizzou sandwiched between two games against East Tennessee State and Florida Atlantic.

“I told our team this during shootaround,” Underwood said. “One of the great things about this game is the feeling in the locker room after. Today was big, that was an excited locker room.”