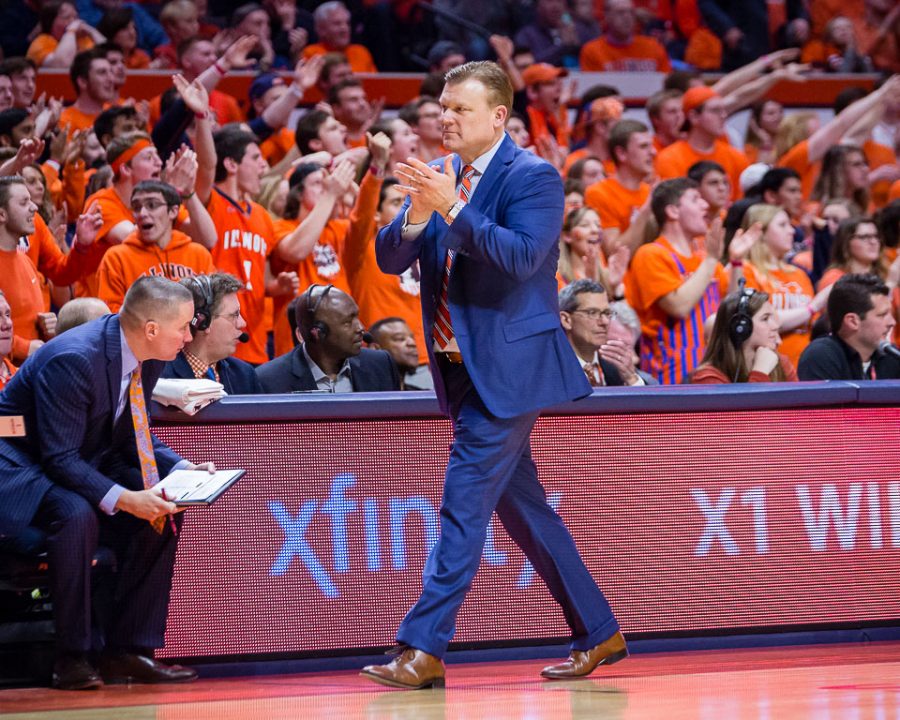 Illinois head coach Brad Underwood claps as he walks back to the bench during the game against Purdue at the State Farm Center on Feb. 22. Underwood has recruited Oak Hill Academy center Kofi Cockburn for the class of 2019.

On a day when the Illinois men’s basketball team had another close conference loss, head coach Brad Underwood received some positive news for the drive back to Champaign from Evanston, Illinois.

Four-star center Kofi Cockburn has announced his commitment to the Illini, according to 247sports.com. Cockburn is the 33rd ranked player in the class of 2019 and the ninth-ranked center.

Listed at 6-feet-10-inches and 290 pounds, Cockburn is going to be one of the biggest freshmen in the nation next year. For reference, Duke’s Zion Williamson has measured out to be the heaviest player in the nation this year and Cockburn has him beat by five pounds. Not to mention he’s got 30 pounds on current Illini seven-footer, Adonis De La Rosa.

Cockburn is currently a player at Oak Hill Academy in Mouth of Wilson, Virginia, known for its basketball prowess and in drawing players from all over the nation. Among some of the notable Oak Hill alum are Carmelo Anthony, Kevin Durant and Rajon Rondo. Currently, Cockburn is playing with the No. 1 recruit in the nation, Cole Anthony.

Originally from New York, Cockburn played for a New York AAU team in the Elite Youth Basketball League circuit, where he led the circuit in rebounds.

The big man continues the trend of Underwood looking for frontcourt help due to the lack of depth this season. Cockburn will now join fellow center Antwan January in the class of 2019.