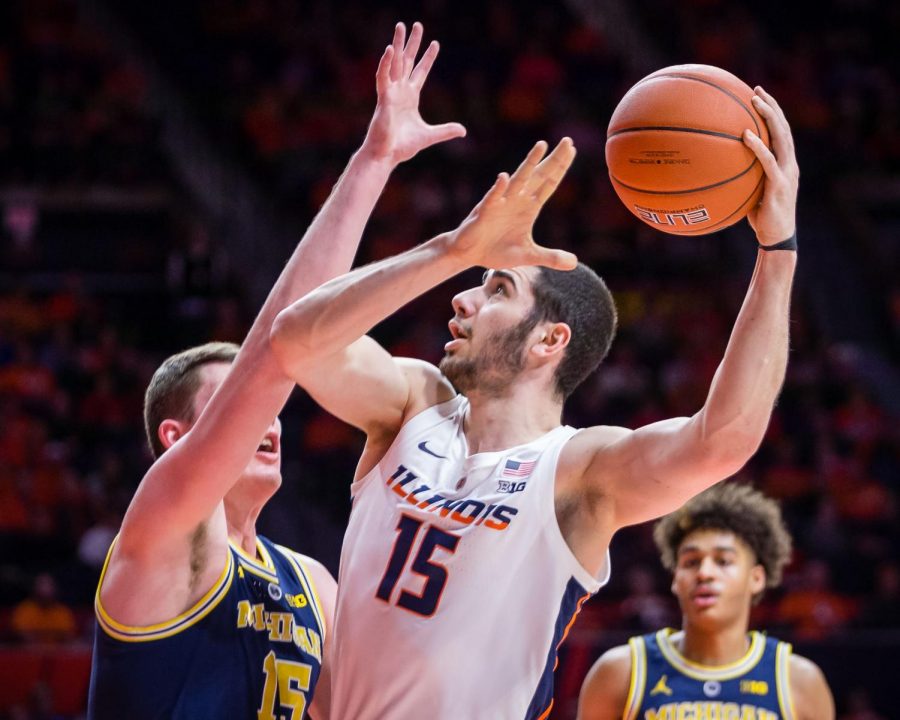 Illinois forward Giorgi Bezhanishvili looks to shoot the ball during the game against Michigan at the State Farm Center on Thursday. The Illini lost 79-69.

Thanks to Fox Sports 1’s new show “Lock It In” and ESPN SportsCenter’s “Bad Beats” segment, sports gambling has become more talked about than ever before, and its implications can be seen in almost any game.

Last Thursday night, the Illinois men’s basketball game against Michigan had its own gambling intrigue.

As Michigan began to pull away from Illinois after the under-four-minute timeout, it could have been easy to lose interest. However, as the teams traded buckets and the lead shifted between 10 and 12 points down that stretch, gamblers began to sweat.

With Michigan favored by 8.5 points, according to the West Gate Superbook in Las Vegas, if Illinois could get a stop and convert just a layup on the other end, Illini fans who bet on their team to cover could at least go home salvaging a win.

Unfortunately for Illinois bettors, the Illini could not stop the Wolverine offense from either a fast break dunk or a trip to the free-throw line, and the lead stayed at double digits, finishing 79-69.

Elsewhere around college hoops, there were far more excruciating moments.

University of California, Los Angeles, and Oregon have both been underachieving this season. The Bruins have already fired head coach Steve Alford, and the Ducks have lost prized freshman Bol Bol for the season with a foot injury. The meeting late Thursday night in Eugene may have not attracted many national viewers, but the game’s conclusion certainly shocked those who saw what happened.

With a minute remaining, Oregon, favored by 3.5 points according to the West Gate, led 74-65. What followed felt improbable.

The Bruins brought the ball down the floor and freshman Jules Bernard nailed a three-pointer, his first attempt from three on the night, to cut the lead to 74-68. UCLA immediately fouled Oregon junior Payton Pritchard, who went to the line and made both of his free throws, increasing the lead to 76-68.

UCLA responded with another three-pointer, this time from sophomore Jaylen Hands, a 28 percent three-point shooter, which was also his first make from deep on the night, to cut the score to 76-71.

The Ducks then turned the ball over on the proceeding in-bounds play. Hands received the ball on the Bruins’ possession and shot another three, this time an air ball, but he drew a foul. He went to the line and made all three free throws, and UCLA then fouled Oregon freshman Victor Bailey Jr.

Bailey Jr. went to the line and made both of his free throws and the Ducks led 78-74. Hands took the ball down the court and tried to get a quick layup but missed. However, UCLA junior Prince Ali grabbed the rebound and dribbled out to the three point line, where he made a very tough turn-around shot falling out of bounds with three seconds remaining.

With the score 78-77, UCLA immediately fouled Pritchard, who again made both foul shots to push the score to 80-77. The Ducks responded by fouling Hands to prevent a game-tying shot with 2.6 seconds left. Hands drained the first, making the score 80-78, but he then had to hope his team would get the rebound after an intentional miss to have hope.

Amazingly, Bruin sophomore Chris Smith grabbed the rebound and laid it in while drawing a foul with 0.7 seconds left. Suddenly, the game was tied and UCLA could win the game outright. Oregon bettors, who had been safe all night until the final minute, now needed Smith to miss his free throw so the game could go to overtime.

Luckily for them, he did.

The contest proved to be a tug of the heartstrings for those betting on the Ducks, as they went from feeling secure in their winnings to coming one free throw away from losing to reluctantly still having a chance all in the course of a minute. Unfortunately for them, the Bruins held on in OT for an 87-84 victory.

How on earth a team loses when they make every single free throw in the final minute seems unexplainable, but regardless, Oregon bettors lost.

Finally, Saturday’s only matchup pitting two ranked teams against each other saw No. 23 Oklahoma take on No. 25 Texas Christian University, and the finish broke hearts all-around. The game was tightly contested and was tied 74-74 coming down to Oklahoma’s final possession.

People betting on Oklahoma to cover the 3.5 point favorite spread, according to the West Gate, were hoping that the Sooners would miss so the team could win by at least four points in overtime. Additionally, those betting under the total, which the West Gate set at 149.5, needed a scenario in which either team could get fouled and make only one free throw with no further scoring.

Both sides would go home upset, as Oklahoma junior Kristian Doolittle made a layup with two seconds left, and TCU could not respond, ruining both the Oklahoma cover and pushing the game over the total.

Situations like these can be found every night in all sports, which should be a cautionary tale for sports gamblers everywhere to have fun betting, but never expect to win because you never know when and how cruelly your money can be lost.