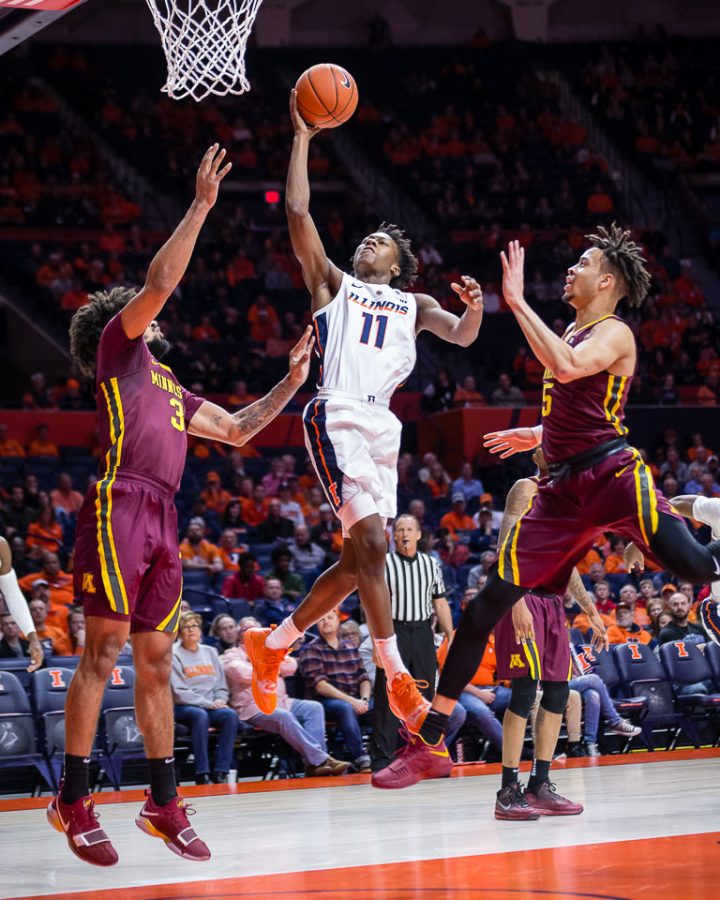 Illinois guard Ayo Dosunmu goes up for a layup during the game against Minnesota at the State Farm Center on Wednesday. The Illini won 95-68.

But he noted he’d sleep better than usual Wednesday night after his team picked up their first conference win of the season against a 13-win Minnesota team at the State Farm Center, 95-68.

The second-year Illinois coach wasn’t afraid to tinker with his rotation against Minnesota, starting the more defensively savvy Da’Monte Williams over senior guard Aaron Jordan and deploying the likes of Tevian Jones, Alan Griffin and Samba Kane more often than he has all season.

The Illini set the pace early, from a jumper by Ayo Dosunmu in the opening possession and an easy three-pointer by Jones, and the team rode their strong start to a blowout 95-68 home win.

Dosunmu put up 23 points and four rebounds, but it was Jones who earned praise from Dosunmu in the postgame presser.

“I’m proud of him because I know what he’s been through and I know the hard work he puts in each and every day,” Dosunmu said. “That was great to see some of his hard work pay off.”

The State Farm Center roared in excitement as Jones hit his early three and then later stole the ball from a Minnesota player before finishing up and under the basket with a smooth reverse layup.

The freshman wing showed positive flashes in his 7:31 minutes on the court, and he wasn’t the only Illini role player to contribute.

Kane went 2-of-3 from the field, sinking two quality mid-range jump shots and hauling in one rebound in just under nine minutes.

Freshman guard Griffin saw 13 minutes and looked more comfortable on the court than most times throughout the season, hitting one of two field goal attempts.

Underwood was proud of his guys afterward, commenting specifically how his team outrebounded the Golden Gophers 39-26, despite Minnesota coming in as the statistically bigger and better rebounding team.

“Just simple tasks and simple goals, along with maintaining the effort and the focus (was important),” Underwood said. “Not getting lost in the up’s and down’s of a game.”

If one word could describe Dosunmu and forward Giorgi Bezhanishvili’s contributions on Wednesday night, it’s efficient.

Dosunmu went 9-for-13 from the field, including a perfect 3-for-3 from beyond the three-point arc.

Bezhanishvili sank 8-of-12 field goal attempts and hauled in a career-best six offensive rebounds (eight total) for a far-and-away floor-best plus/minus of plus-39 while on the court.

“Coach wrote us notecards before the game; he gave us little goals for the game,” Bezhanishvili said. “My personal goal was rebounding. I think, almost on every card, he wrote rebounding. We tried to outrebound them; I think we were plus-10 or 11 on the boards. That was our goal, we accomplished that and it was great.”

The Illini’s Georgian seven-footer also was able to stay on the court for a solid 29 minutes, limiting himself to three fouls and avoiding foul trouble early.

It was a major improvement over many games this season, where he’s picked up some cheap fouls and had to ride the bench.

“Guys believe in me, they pass me the ball,” Bezhanishvili said. “Then I just have to be aggressive.”

Dosunmu logged 32:28, a game high of court time, and had one of his most productive offensive nights. The freshman also helped shut down 6-foot-8-inch Minnesota guard Amir Coffey, who leads the Golden Gophers with 15.9 points per game average.

Coffey went 2-of-13 from the field, though he did put up a respectable nine points.

“Coach told me I was going to guard him. I watched film on him to try and find out his weaknesses and do my best defensively because I knew he is the heart and soul of their team,” Dosunmu said. “He’s a great player; we play them again in two weeks. I know he’s going to be motivated, but I just played good defense, then my team was in a position to help. We just played great team defense.”

Bezhanishvili got the better of elite rebounding force Jordan Murphy, who only brought down three rebounds, which comes in well below his Big Ten-leading 11.6 rebounds per game mark.

A complete 40 minutes, finally … and it feels good

Illinois has been impressive for stretches during games this season, but the team was the better side wire-to-wire against Minnesota on Wednesday, taking a 51-28 lead into the half and not giving the Gophers an inch of daylight down the stretch.

Underwood was thrilled with his team’s overall performance on the night.

“I’m so happy for that locker room,” Underwood said. “They know they’re good players, they know that at some point they’re going to win. But winning is really, really hard. Now we have to do the next thing, which is get better tomorrow and learn how it feels to show up to practice and have a good positive feeling.”

The Illini only trailed once — briefly in the first half after Coffey hit a three-ball on the right side at the 18:06 mark of the first half.

And in addition to strong performances from Dosunmu and Bezhanishvili, guards Trent Frazier and Andres Feliz each scored in double digits, despite having to manage some foul trouble.

Frazier went 5-of-11 for 15 points after getting into some foul trouble. Feliz managed to avoid picking up his fifth foul after going 4-of-7 from the field with two steals and three rebounds.

On the defensive end, Illinois held Minnesota to 44.1 percent shooting performance, and more importantly, only allowed four three-pointers on the night.

In its entirety, the result was a testament to Illinois sticking with Underwood’s plan, despite things not going well against the nation’s fifth-toughest schedule, according to Kenpom.

After losing five-straight games where Illinois had opportunities to win each, the win was particularly gratifying.

“I felt like we were in every game we’ve played in the conference so far, so it was great to get that monkey off your back and get the first conference win,” Dosunmu said. “We’re just trying to get better and better. It’s a great win tonight, it feels good, but now we’re trying to focus on Iowa on Sunday and get it from there.”