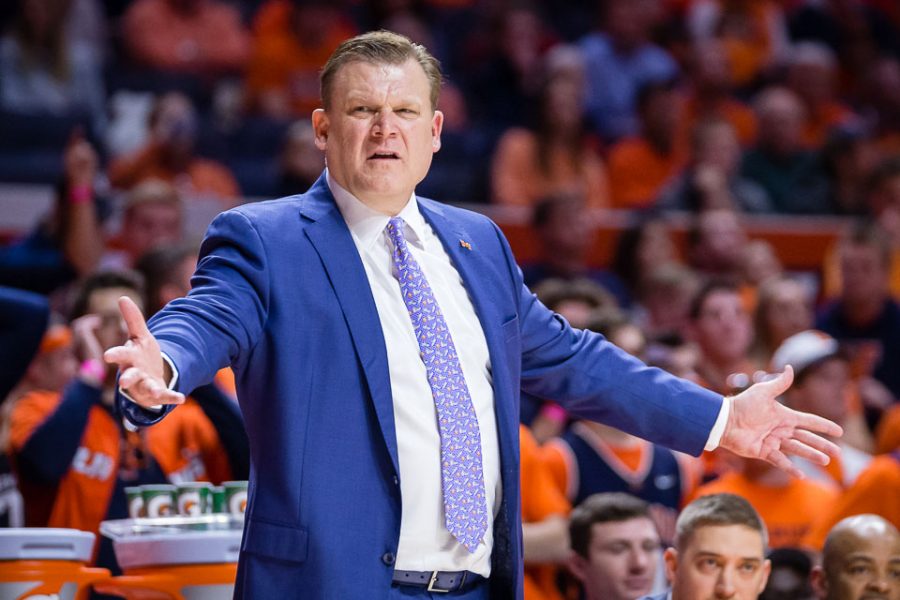 Illinois head coach Brad Underwood reacts to action on the court during the game against Wisconsin at State Farm Center on Wednesday, Jan. 23, 2019. The Illini lost 72-60.

Despite turning Wisconsin over 17 times on Wednesday night — tying the Badgers’ season-high — Illinois sputtered to a 35 percent shooting performance and another disappointing conference defeat.

Illinois could hardly buy a three-pointer.

Launching 21 attempts from beyond the arc, the Illini only made four, coming in at a 19 percent clip. Their only worse performance from three-point range this season was a 0-for-11 showing in a Jan. 6 loss at Northwestern.

Wisconsin missed just four of its 21 attempts from the charity stripe and the Badgers hit seven treys to finish the night at 50 percent.

“I liked our shots, we got a couple clean looks at three’s,” said head coach Brad Underwood. “And yet it was four turnovers and missed free throws. You can’t miss free throws against Wisconsin and beat them; those were momentum killers.”

Normally the go-to scorers for Illinois, guards Trent Frazier and Ayo Dosunmu, struggled mightily from the field, shooting 3-of-10 (1-of-5 3FG) for nine points and 4-of-16 (0-of-5 3FG) for eight points, respectively.

To add to those struggles, senior guard Aaron Jordan went just 2-for-10 from the field, sinking two of the six three’s he launched.

Underwood was hard-pressed as to why his team was so unable to score the basketball on Wednesday night.

“We’ve had nights where we’ve had a bunch of (three’s),” Underwood said. “If I knew the answer to that, I’d get it figured out. You get Ayo 0-for-5, Trent 1-for-5. I think there were a couple quick ones, but they’re in the flow. Those are shots we practice and tonight they didn’t go in.”

Freshman forward Giorgi Bezhanishvili was the only Illinois player to give Wisconsin trouble when he had the ball, hitting 8-of-14 shots for 20 points while adding eight rebounds.

Jordan, for his part, at least went 4-of-4 from the free throw line.

But even Bezhanishvili struggled from the line, making just 4-of-9 free throw attempts.

“We can’t be soft-minded and miss free throws,” Bezhanishvili said. “Everybody missed free throws, we missed like 12 free throws today. Mentally, as players, we have to be tougher. That’s it.”

Are the kids alright, Brad?

Illinois has now lost 14-straight games to Wisconsin, dating back to Jan. 2, 2011. It’s the program’s longest string of defeats to any team in its history.

With 14 losses and only one Power Five win, it’s safe to say this team is not going to the NCAA Tournament. With that reality, questions about the lack of playing time for younger players have come up.

Freshmen Tevian Jones, Alan Griffin and Samba Kane combined for just nine minutes on the court. Underwood said there wasn’t really any reason why he left the trio on the bench for so long.

“No reason, tempo of the game,” Underwood said. “There were so many timeouts in the second half and delays. There were no fouls and you have Giorgi really cranked up and going. I liked the way defensively we were playing, no reason at all (they didn’t play much).”

The second-year coach liked how his team’s defensive performance was for most of the game, which led him to favor leaving the starters on the floor. Only junior college transfer Andres Feliz saw more than 12 minutes off the bench, contributing six points on 3-of-6 shooting.

“(The freshmen have to) pay their dues, quite simply,” Underwood said. “You’ve got guys that defensively were dialed in. We were so good defensively in the first half and the start of the second half.”

Redshirt-junior forward Kipper Nichols saw 11 minutes himself, during which he missed one three-point attempt and collected one rebound.

Jones saw 16 minutes at Iowa and struggled to avoid picking up fouls in that time. But besides that, Jones has only played four, two, eight and five minutes in the last five conference games.

Griffin played 13 minutes in the blowout win over Minnesota last week but has only logged three, three, seven and two minutes in the last five conference games besides that.

Kane, averaging 6.4 minutes per game in only 12 appearances, has yet to eclipse 10 minutes on the floor in a Big Ten game.

Underwood said it hasn’t been a matter of playing the likes of Nichols, as opposed to the freshmen, either.

“I think (Nichols has) got experience, I think he’s proven that he can do some things,” Underwood said. “It’s not about him or them, so don’t make it about that. He’s got a physicality about him that is something we don’t necessarily have a lot of, besides Giorgi. When it comes to size, we’ve seen (Jones). (Jones) is going to be terrific and Alan is going to be terrific. (Jones), the last few games, has been in a little foul trouble, so that restricts him. And yet, we’ve got a lot of confidence in those guys and they’re going to be really good for us.”

Giorgi Bezhanishvili has exceeded all expectations for the Illini.

The Georgian product has scored in double figures in five of the Illini’s last six games and seven of their last nine, and he did so again against the Badgers.

He also gave Wisconsin star Ethan Happ a tough time, in combination with some solid help defense from his teammates.

Jordan also helped limit Happ while guarding him for some of the game. Happ only scored nine points, well below his average of 19.2 per game. He also turned the ball over six times and nearly fouled out, forced to ride the bench for a significant amount of time during the second half.

“He took the challenge,” Underwood said. “It was a great opportunity because last year, Ethan had his way with us in both games. You force a player like that into six turnovers, nine points, half his average, you’re doing a lot of good things. It wasn’t just him, but he made his touches really hard and forced him into six or seven turnovers.”

Wisconsin head coach Greg Gard was not taken aback by Bezhanishvili’s prowess as both a scorer and a defender.

He noted his knack for grabbing offensive rebounds — something Bezhanishvili has progressed at since the beginning of the season — and ability to score in the paint.

“(Bezhanishvili) does a really good job (with his) right, left hand,” Gard said. “Likes physical contact, he’s active, he rebounds. For a guy that had 48 offensive rebounds and 43 defensive (rebounds), when you have that ratio, when you have more offensive than defensive, that tells me that you’re a terrific rebounder. He’s got a motor and he plays hard, does some good things.”

Lamenting his team’s offensive inability on the night, Underwood said Illinois’ defense kept the team in the game, forcing Wisconsin into some offensive struggles early in the second half.

“The first four minutes of the second half, yeah, it feels really good when you’re getting layups at the rim,” Underwood said. “But we (were) 0-for-6. Defensively, we maintained through that. If we do anything on the other end, we stretch that thing out to an eight or ten point lead.”

But the Illini were once again unable to put together a strong offensive showing in combination with the defensive success they had and they paid for it.