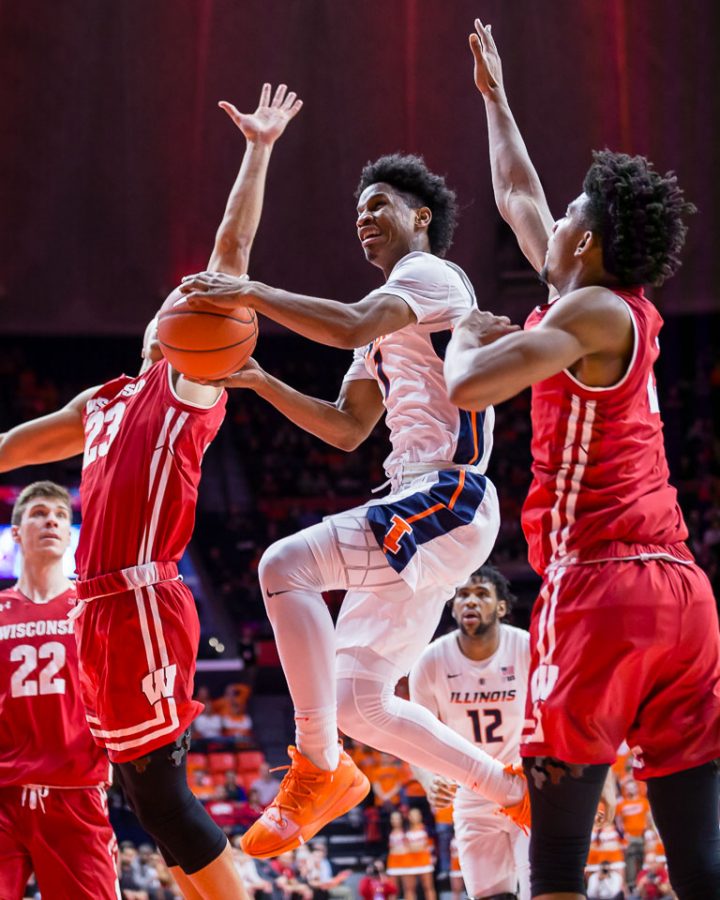 Illinois guard Trent Frazier draws contact on a layup during the game against Wisconsin at the State Farm Center on Jan. 23. The Illini lost 72-60.

Suddenly, things are looking up for Illini basketball.

After defeating No. 9 Michigan State on Tuesday, the Illini have won three of their last four and four of their last seven, Big Ten games. A win on Saturday would be the first time the program has won three-straight conference games in Brad Underwood’s time as head coach.

The young Illini are focused on not dropping the game following a big win, something they failed to do against Minnesota on Jan. 16 and against No. 13 Maryland on Jan. 26.

“You have to tell yourself, ‘Alright, it’s over,’” said freshman guard Ayo Dosunmu. “Now we gotta keep building on this. We don’t want to be a team where we beat a good team and then just lay an egg, like we did against Iowa (after Minnesota).”

With the teams who finish 10th through 14th in the Big Ten forced to square off on the opening day of the Big Ten Tournament, the Illini would greatly boost their chances of finishing above four teams in the conference with a win over the Scarlet Knights.

On paper, Illinois has a favorable opponent in the .500 Rutgers.

Rutgers has been a streaky side in conference play, opening 1-5 before rattling off three-straight wins against Nebraska, Penn State and Indiana, then dropping its last two at Ohio State on Saturday and at home against No. 7 Michigan on Tuesday.

Like Dosunmu, Underwood emphasized the challenge Rutgers can pose, despite coming off the program’s first top-10 win since 2013, when Illinois beat No. 1 Indiana.

“As a staff, we’ve definitely got our guys’ attention,” Underwood said. “You’re talking about one of the top rebounding teams in the Big Ten, you’re talking about a team with Geo Baker, (Eugene) Omoruyi having phenomenal years. The addition of Shaq Carter has given them a tremendous presence inside.”

Junior forward Eugene Omoruyi leads Rutgers in both scoring and rebounds, putting up 14.6 points per game and 7.2 rebounds per game.

Sophomore guard Geo Baker has had a strong campaign as the team’s second scorer and lead guard, averaging 13 points per game (second on the team) and shooting a team high 35.4 percent from three-point range.

Underwood knows the Scarlet Knights, like the Illini, are a team reliant on its youth.

“They keep adding pieces,” Underwood said. “No different than we are, it’s about growth and your culture and what you stand for. To see the Omoruyi kid, to see Geo as a sophomore, they’ve got a couple freshmen in their lineup that play major roles for them. They’re building.”

Against Michigan State on Tuesday, Illinois guards Dosunmu and Trent Frazier each scored in double-digits for just the fifth time in 12 Big Ten contests, despite the pair scoring team-leading averages of 14.6 (Frazier) and 14.2 points (Dosunmu) per game, respectively.

Dosunmu said it was only a matter of time before he and Frazier started clicking simultaneously on the court.

“We just been playing together,” Dosunmu said. “Like I said, (Trent’s) one of my best friends on the team. We have that bond off the court and that helps on the court a lot. We’re looking for each other, trying to get each other going. We play off each other. Now people are seeing what our vision was when I chose to come here.”

The Morgan Park graduate believes if the duo can consistently produce well at the same time, the Illini are a force to be reckoned with.

“I think it’s hard to guard (both of us),” Dosunmu said. “We always talk about like, ‘I wonder who will get the (other) team’s best defender?’ Because with the best defender, they try to take one of us out and the other one gets going. And then when we pick things up defensively and get out in transition, they can’t really find both of us and we’re looking for each other. That’s hard to stop.”

If the young Illini guards can replicate that feat against the Scarlet Knights, there’s a strong chance of Illinois having its way for the third-straight contest at the State Farm Center.