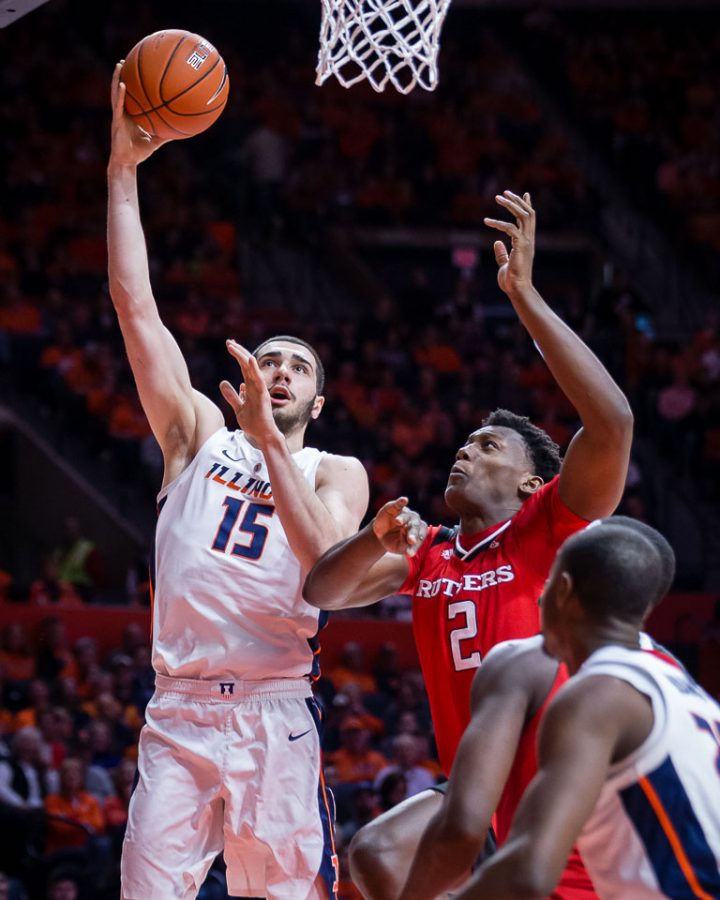 Illinois forward Giorgi Bezhanishvili goes up for a layup during the game against Rutgers at the State Farm Center on Saturday. The Illini won 99-94, making this the team’s third straight Big Ten win.

Illinois defeated Rutgers 99-94 in overtime for its third straight Big Ten win, the first of its kind in the era of head coach Brad Underwood. And one thing is for sure: It would not have happened without Giorgi Bezhanishvili.

Bezhanishvili broke the Illinois single-game freshman scoring record with 35 points on 14-of-18 shooting with seven rebounds.

Ironically, record-holder Deon Thomas was on hand at the State Farm Center to witness the 34-point showing he had against the University of Wisconsin-Milwaukee in 1990 become second to Bezhanishvili’s scintillating show.

The freshman big man said he didn’t know about the record until Thomas told him when the two spoke on the court after the game.

“He told me I broke his record,” Bezhanishvili said in the postgame presser. “I said, ‘I’m sorry, it wasn’t intentional.’”

In what has become a regular occurrence since November, the assorted media broke into laughter.

It’s safe to say no one expected Bezhanishvili to have the year he is having. The Georgian forward came into Champaign unheralded as the No. 370 recruit and the No. 67 power forward in the country.

Rutgers had seen Bezhanishvili, who lived nearby in Elizabeth, New Jersey, but the team did not have room to offer him a spot.

“Rutgers told me they didn’t have a scholarship to offer me,” Bezhanishvili said. “So that’s kind of funny.”

But Underwood and the Illini did, and the move has paid off.

At the half of Saturday’s game, though, it didn’t look like a special game for the freshman, who was 2-of-5 with six points and three rebounds.

Underwood let Bezhanishvili know he wasn’t happy with his play; he needed more.

“I really let my teammates down in the first half,” Bezhanishvili said. “Coach told me that in front of everybody at halftime. He said, ‘Giorgi, you got bad energy. You got to change your energy.’ Usually, I bring good energy. I told him, ‘I got you, Coach; I will change my energy.’ That’s what I did and then that’s what happened.”

Senior guard Aaron Jordan knew Bezhanishvili could have the type of impact he had on Saturday. He said the team got to the point where it decided it wanted to almost entirely run the offense through the freshman.

“It got to the point where Coach asked us what we wanted to do and we said, ‘Give the ball to Giorgi,’” Jordan said.

The Rustavi, Georgia, native has had quite the debut campaign at Illinois after only averaging eight points per game in high school.

In home Big Ten games, Bezhanishvili is averaging 19 points, and he has scored 20 or more points on four different occasions now (against Notre Dame, Minnesota, Wisconsin and Rutgers).

He has, by far, the best field-goal percentage on the team (54.3 percent) and has overtaken Jordan as the team’s lead rebounder (5 per game).

Bezhanishvili has played progressively better in each of the three games the Illini have played — and won — since his brother, Davit, arrived on campus for a visit from their home in Vienna, Austria.

The 6-foot-9-inch forward went for eight points and four rebounds in a win over Nebraska, then 16 and five in the upset of No. 9 Michigan State, and then, of course, 35 and seven.

Davit’s visit has been a memorable time for him and Giorgi, but it has also been memorable for the Illini.

Giorgi spoke about the importance of family after the game, and he compared his family to his newfound Illinois family.

For a team who has struggled to score this season (66.8 points per game), the Scarlet Knights lit it up on Saturday, breaking out to score 94 points on 50.7 percent (37-of-73) shooting.

Freshman guard Caleb McConnell exploded for a career-high 25 points on an efficient 8-of-10 (3-of-4 3FG) shooting clip.

Underwood lauded his team’s performance and effort down the stretch but noted its defensive struggles, despite limiting high-powered Michigan State to 74 points earlier in the week and holding Nebraska to 64 last weekend.

“We had no answer defensively,” Underwood said. “It was a tough day for us on that end of the court. And yet, we did make enough stops down the stretch when we had to.”

Rutgers added 50 points in the paint (Illinois also had 50) and 35 off the bench, thanks to McConnell, while out-rebounding Illinois 43-39. The Scarlet Knights also out-did the Illini in transition, scoring 20 points to the Illini’s 16.

“McConnell made every play; he made every shot,” Underwood said. “Our pressure didn’t bother him. They didn’t run a whole lot, but they got the ball and were effective.”

Furthermore, Illinois ended up with three of its better defenders, Ayo Dosunmu, Trent Frazier and Andres Feliz, forced to ride the bench for segments of the second half with foul trouble.

Frazier picked up his third foul with 14:18 to go and was limited to 34 minutes, while Dosunmu played 33 minutes, coming in off the bench late after sitting for multiple stretches during the half. Feliz played 25 minutes but likely would have topped 30 if he had not racked up four fouls of his own.

Without Bezhanishvili’s 29 points after the half, the Illini would have been hard-pressed to keep up with the Scarlet Knights’ uncharacteristic offensive prowess.

Closers (for the third time in a row)

The Illini have figured out how to close out games.

In each of its last three wins, Illinois has kept its opponents at just enough of a distance down the stretch to pull out positive results.

Despite a poor free-throw shooting performance, Illinois closed out against Nebraska on Feb. 2, then retook the lead from Michigan State with under eight minutes to go, after leading for the game’s entirety.

Against the Scarlet Knights on Saturday, the Illini took care of business at the free-throw line to wrap up the result.

Bezhanishvili himself hit seven of eight free throws against Rutgers (a career high) and the team made 19-of-26 (73.1 percent) on the day.

Underwood has continued to note his team’s growth over the three-game win streak, as it has won four of five Big Ten games and eclipsed last season’s four-win total with seven games remaining.

Lately, it has helped that his team has a newfound belief in itself.

“Confidence,” Underwood said. “Being in those battles, we could sit and pick a game in the non-league. Having leads in the second half and having the opportunity to close games and miss shots, or miss free throws or not get a stop. At some point, you sharpen the knife (to) where it gets pretty sharp. You do start doing some of those things and executing.”

He said on many other teams, the core would’ve splintered into fragmented pieces but not with this group.

“We’re not winning these games if that locker room isn’t (on the same page),” Underwood said. “Yeah, we have good players, but this group has stayed together.”

Jordan and his teammates weren’t disappointed when Rutgers scored late to force overtime, he said.

Rather, they relished the chance to finish their opponent off.

“How much we’ve matured over time and over the course of the season, we just knew that we’re going to take those punches,” Jordan said. “When the game went into overtime, we said, ‘Good, because we’re built for this.’”