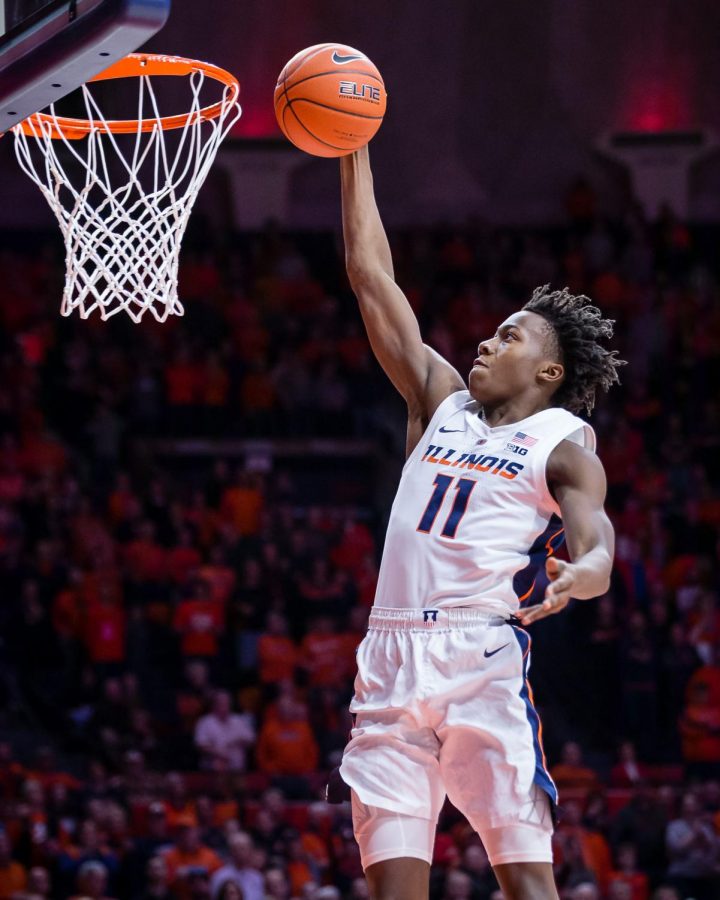 Illinois guard Ayo Dosunmu rises up to dunk the ball during the game against Rutgers at the State Farm Center on Saturday. Dosunmu has been named Big Ten Freshman of the Week, alongside Giorgi Bezhanishvili, who was named Big Ten Player of the Week.

Both accolades made Big Ten history, marking the first time two freshmen from the same team received the awards in one week.

First time in Big Ten history that a school has received both awards with two different freshman in same week. #Illini pic.twitter.com/DA2e0Qb9En

The conference recognition follows a handful of breakout performances from the freshmen duo. Illinois is on a three-game win streak and has won four of its last five contests, including two notable victories over No. 13 Maryland and No. 9 Michigan State.

Bezhanishvili, who earned Big Ten Player of the Week, shattered the all-time Illinois freshman single-game scoring record after scoring 35 points against Rutgers on Saturday, breaking the 29-year-old record set by Deon Thomas, who scored 34 points in 1990. During the same game, Bezhanishvili went 14-for-18 in field goals and netted seven of his eight free throws. Bezhanishvili is averaging 25.5 points on the week with six boards and 69 percent shooting.

Dosunmu also averaged 18 points within the week and notched four assists, 3.5 rebounds and 2.5 steals. Against Michigan State, Dosunmu netted a game-high 24 points – one point shy of his career-best – going 8-of-14 shooting, 4-of-8 from the arch and 4-of-4 from the free throw line.

The victory over Michigan State also marked Dosunmu’s seventh 20-point game and lifted his average points per game to 15.2 in conference play.