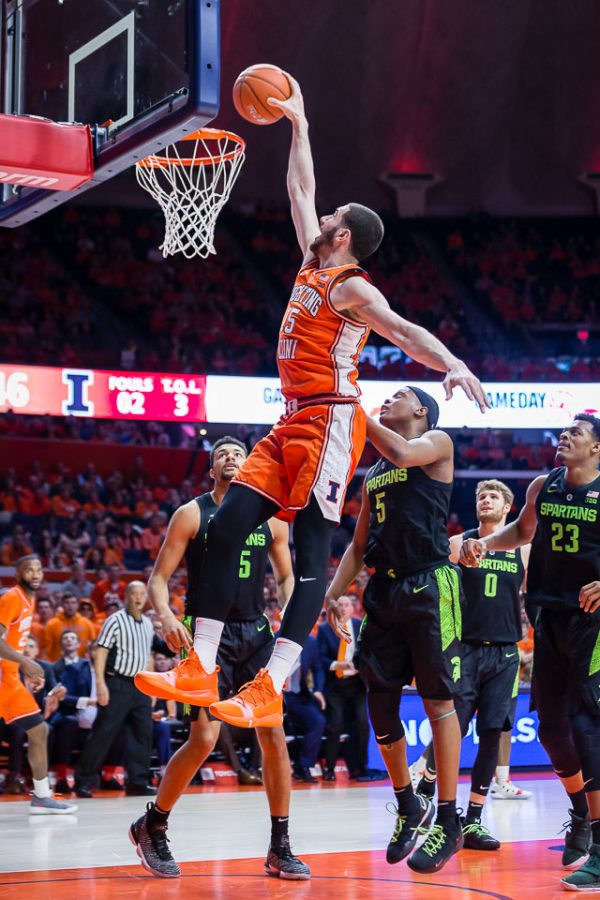 Illinois forward Giorgi Bezhanishvili rises up to dunk the ball during the game against Michigan State at the State Farm Center on Feb. 5. The Illini won 79-74 and are looking to continue their win streak against the Buckeyes on Thursday.

Illinois men’s basketball is on an unprecedented run in the Brad Underwood era, winning three-straight Big Ten games for the first time under the second-year head coach.

The Illini will now depart the friendly confines of the State Farm Center, where they are 8-4 on the year, for a road trip that starts Thursday night in Columbus, Ohio.

Away from the home court, Illinois is 1-11. The only “road” win came against No. 13 Maryland at Madison Square Garden on Jan. 26.

While the Illini come into the game hot, winning four of their last five, the Buckeyes have won their last three conference games.

Ohio State took down Rutgers and Penn State at home during the first week of February, then beat Indiana by three on the road to get back to 6-6 in the Big Ten.

Ohio State (16-7, 6-6) started league play 2-0, including a Dec. 5 win in Chicago over Illinois, but then lost six of its next seven conference games.

“They’re playing as well as we have been,” Underwood said. “They’ve been finding ways to win games. They’re doing it with their defense.”

His scouting report on the Buckeyes focused on sophomore big man Kaleb Wesson, who is averaging 14.7 points per game to go with 6.4 rebounds per game for Ohio State.

“They pose a problem in terms of big Wesson in the middle as a guy that has really expanded his game,” Underwood said. “I think he’s shooting 70 percent from three in his last five. He’s a guy that is a handful on the block as well. Then you’ve got another freshman in this league in Luther Muhammad that has really stepped his game up the last five.”

Illinois freshmen Giorgi Bezhanishvili and Ayo Dosunmu have been drawing considerable attention of their own, with Bezhanishvili as the Big Ten Player of the Week and Dosunmu as the conference’s Freshman of the Week.

Bezhanishvili broke the program record for points scored in a single game by a freshman, with 35 points on 14-of-18 shooting and seven rebounds, while Dosunmu added 12 points, five rebounds and six assists, turning the ball over just once.

It was the first time in conference history a program has had two players sweep the awards.

Bezhanishvili, like his coach, emphasized the importance of a road win and doing the right things to get it.

“We think that is the next step, to be disciplined for 40-straight minutes on the road,” Bezhanishvili said. “To not really get into an environment when we get mentally down when the other crowd is really screaming or whatever. Just be disciplined, limit our mistakes and just play hard for 40 minutes, not just one half or whatever; we have done that before.”

Underwood has made the message of not getting overly confident with success very apparent to his young team.

Despite the recent run, the Illini are still 9-15 (5-8 Big Ten). Even though the team has surprised its win total from Underwood’s first year in charge, the coach won’t fail to mention the program is not anywhere near where it wants to be.

“We got to be careful that you don’t drink the poison,” Underwood said. “It’s about the locker room and about the guys in there, those are the only things that matter. I try to keep it real with them and very honest.”

A win would vault the Illini — currently ninth in the league — into a tie with Minnesota (6-8, eighth place) and would bring them within a half-game of the Buckeyes, who sit in seventh place.

Dosunmu said Illinois met as a team on Wednesday and discussed its collective goals for the end of the season. He said the first step in finishing it how Illinois wants is to get off the mark and get a win in an away Big Ten game.

He also expressed his excitement with Bezhanishvili’s recent breakout performance, which came in an already productive string of games in conference play. The Georgian-native has scored in double figures in nine of his last 14 games.

Dosunmu knows opponents are taking notice of that and thinks it will benefit the Illini down the stretch.