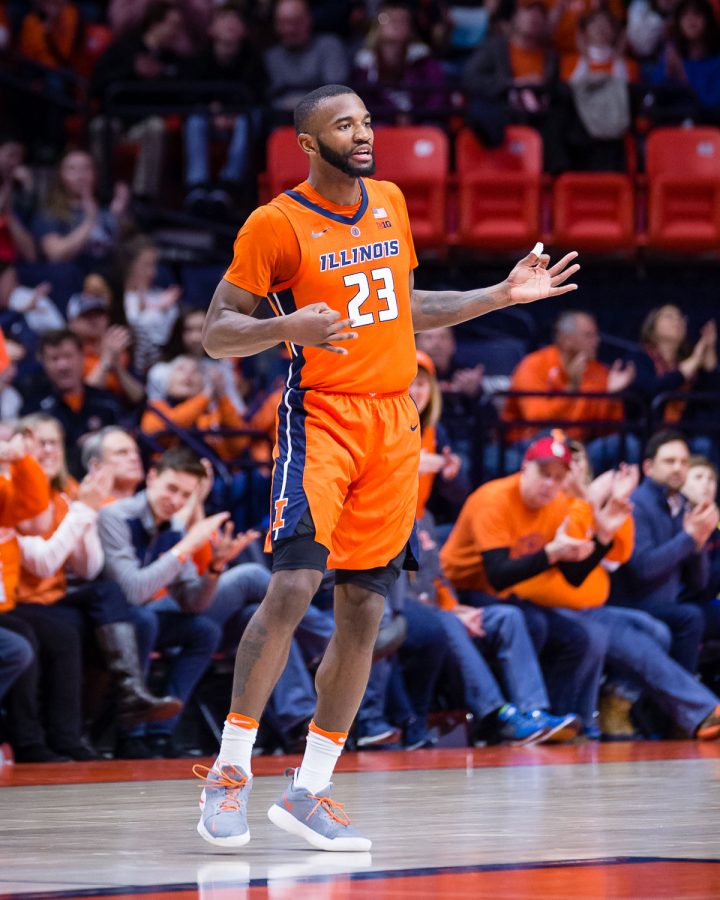 Illinois guard Aaron Jordan celebrates after making a 3-pointer during the game against Northwestern at the State Farm Center on Sunday. The Illini won 81-76.

Emotions will be running high in Champaign as Illinois hosts rival Indiana for senior night on Thursday.

Second-year head coach Brad Underwood insists, as he has all season, his team has continued to improve as the year has gone on.

“We’re a much better basketball team now,” Underwood said. “We had a very selective and small portion of offense at (the time). That was evident. They’re very good defensively. We had four or five shot clock violations in that game.”

Indiana snagged 12 offensive rebounds (and 13 steals) in the two teams’ prior meeting and 57 in the last four games.

The Hoosiers are led in scoring by Langford, a 6-foot-6-inch guard who is averaging 16.9 points per game. Langford also leads Indiana in minutes on the floor, averaging 33.9 minutes per game.

With the turnover from John Groce to Underwood as head coach, Jordan is the only remaining guy from the 2015-16 freshman class to make it to his senior year at Illinois (although Kipper Nichols redshirted and has one year of eligibility left).

“I don’t think it really has set in that it is my last home game here,” Jordan said. “I’ve thought about it, I’ve tried not to think about it and keep myself busy. It’s a remarkable thing, just being on this journey. The people I’ve met, the things I was able to do, it means something.”

The Plainfield East product has gradually improved throughout his career at Illinois, developing from a one-dimensional, catch-and-shoot player into someone who can attack in multiple ways on offense.

Freshman forward Giorgi Bezhanishvili acknowledged it would be an emotional affair, honoring Jordan, De La Rosa and Cayce, and went on to describe Jordan off the court.

“He has spent a lot of time here,” Bezhanishvili said. “He’s a great, great guy; I love him to death. He’s a good person apart from basketball, you know. His academics are great. He’s just a great person in total.”

The Illini wants to avenge their loss to the Hoosiers from earlier in the year, like they just did with their most recent win over Northwestern. The team also wants to send their loyal fourth-year guard off with a resounding win over a rival.

Bezhanishvili, like Underwood, expressed his dissatisfaction with the loss back in early January.

“It was really disappointing for us because we felt like we could have won that game,” Bezhanishvili said. “It’s kind of a rematch for us. We are hungry as always. Trying to play hard and get the win, especially because it is our senior night. (We want to) leave it all out for the seniors, for our fans this last home game.”

As for how to beat the Hoosiers, a program the Illini has had some success against in recent years (they split the series 1-1 last year), Underwood stressed keeping Langford from getting to the free throw line excessively.

Bezhanishvili noted Illinois must rebound better and play tighter on the defensive end.

“We can’t let them drive,” Bezhanishvili said. “Obviously, Indiana will try to spread us and drive (on) us a lot because they are a high two-point field goal team. They don’t shoot three’s as much, so we have to guard the ball, rebound and stay focused for 40 minutes.”

The game has major postseason ramifications for Indiana, which is still in the mix for an NCAA Tournament berth, but needs to string together some wins here in the week before Selection Sunday.

Despite no realistic NCAA Tournament hopes, Illinois will ensure it avoids playing in the Wednesday games of the Big Ten Tournament next week with a win on Thursday or against Penn State in the season finale.

Regardless of the result, Thursday night will be it for Jordan at the State Farm Center and at Illinois.

Underwood won’t soon forget the contributions the Illinois native has made to his program.

“He exemplifies what I want our program to be about: perseverance, toughness, work ethic,” Underwood said. “He’s a guy that bleeds blue and orange. The (Block) I means more to him than maybe any single player on our team because he’s that invested. Any time you get sweat equity into a program like he has, man, you’re awfully proud.”