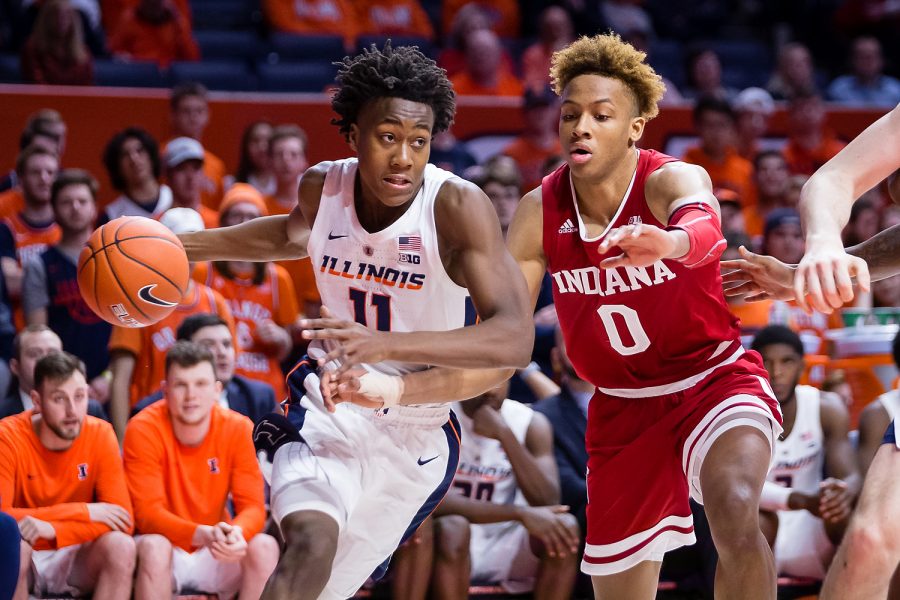 Illinois guard Ayo Dosunmu drives to the basket during the game against Indiana at the State Farm Center on Thursday. The Illini lost 92-74.

Illinois was expecting a tight, emotional affair as it played host to rivals Indiana on senior night Thursday at the State Farm Center.

But the game was far from close.

Illinois lost 92-74, its fourth loss in the last five games, and lone senior Aaron Jordan — who stuck around the program through four tough years and a coaching change — was sent off in disheartening fashion.

Head coach Brad Underwood said postgame that Jordan was quite emotional ahead of the contest.

“You always want to have a fond memory of your last one, but it doesn’t always work that way,” Underwood said. “Senior nights are really, really difficult. They stir a lot of emotion. Aaron was extremely emotional before the game. In the locker room even, during the pregame talk. Having to turn a switch, get back up and get jacked up, it’s not an easy thing.”

Jordan went on to score 11 points on 4-of-10 (3-of-7 3FG) while adding two assists and a rebound to close out his Illini career at the State Farm Center.

Understandably, he wasn’t happy about the way things unfolded.

“At first, (the feeling is) definitely frustration because of, you know, losing the game like this and knowing what is at stake at the end of the season,” Jordan said.

Jordan’s 11 points on the night were slightly better than his 8.1 points per game average, which ranks as the fifth-leading scoring output on the team.

After stepping off Lou Henson Court to chants of his name from the Orange Krush and a standing ovation from the State Farm Center crowd, Jordan reflected openly on his senior season.

“There’s a lot of memories of how far this team has come together,” Jordan said. “We’ve been through the ups and downs. We’ve got to keep going and deal with what’s in front of us.”

The Plainfield East product is the only remaining holdover on scholarship from the John Groce era (besides redshirt junior Kipper Nichols).

An hour after the game ended, Jordan returned to the court for about 10 minutes, taking pictures with supporters and his family.

Where art thou, defense?

They spread Illinois out and dominated in the paint, cruising to a blowout in what was a must-win to keep their slim NCAA Tournament hopes alive.

“We didn’t get into a rhythm defensively,” Dosunmu said. “Our defense was atrocious; we didn’t guard anyone. All credit to Indiana; they were able to execute and do whatever they wanted.”

More importantly, they scored 52 points in the paint and 21-of-31 layup attempts.

Indiana head coach Archie Miller admitted that turning the ball over just seven times against Illinois “was a surprise,” given the success the team had against other Big Ten opponents on the season.

The Hoosiers actually outscored the Illini in points off turnovers, 17-10, something Miller didn’t expect either.

He summed up how Illinois makes teams play, with its high-pressure defense and emphasis on forcing turnovers.

“I’m not sure if I’ve ever had a team score 52 points (in the paint),” Miller said. “These guys force you to take three’s or layups. The way the defense is set up with the overplaying and all the pressure, you’ve got to put the ball on the floor. I thought our spacing was pretty good and I thought our guys did a decent job of being able to get all the way to the basket.”

Underwood, for his part, lamented his team’s play on the defensive end, which was especially frustrating because of the fairly strong offensive play.

“When you shoot 50 percent from the field, 48 percent from the three and you’re at home, you’ve got to like your chances,” Underwood said. “Couldn’t be any further from the reality of how important the other end of the court is.”

The Illinois defense in the first half was practically nonexistent, as they gave up 52 points and allowed Indiana to shoot 57.9-percent from the field.

Indiana scored 30 points in the paint, compared with 12 for Illinois, and went 13-of-17 on layups to average 1.529 points per possession. Illinois also only forced two turnovers.

“We didn’t do anything we do,” Underwood said. “It was hugging our man, a complete lack of execution. We went in with a mindset of how we were going to guard ball screens. We had one hard hedge in the first half, that’s how we talked about handling Romeo (Langford) on ball screens.”

But they launched 17 first-half treys and made six, largely because the Illini were spread out off of dribble-drive penetration and slow to close out on shooters as the Hoosiers kicked the ball outside.

With 15:35 to go in the second half, sophomore guard Trent Frazier appeared to lose his footing, falling on Indiana guard Rob Phinisee and getting called for a foul. Phinisee hit 2 of the 3 the ensuing free throws, which put the Hoosiers up 17 points, 65-48.

The second half was only slightly better for Illinois, as it allowed Indiana to shoot 51.9 percent and 33.3 percent from three-point range.

When Illinois went to Bloomington, Indiana, to take on the Hoosiers on Jan. 3, the story of the game was how freshman Romeo Langford took over.

The projected NBA first-rounder exploded for a career-high 28 points, propelling the Hoosiers to a 73-65 victory.

He went 8-of-13 from the field, adding six rebounds and three assists.

Illinois’ stud freshman, Dosunmu, put together a 20-point performance on 7-of-12 (4-of-6 3FG) shooting while adding three rebounds, three assists and two steals, but it wasn’t enough for Illinois to escape with a victory.

On Thursday, Langford scored a modest 10 points on 4-of-8 (1-of-2 3FG) shooting with six rebounds and three assists.

“Romeo had so much success at their place,” Underwood said. “We wanted to make sure we got after him a little bit, especially to his right hand.”

Dosunmu was the leading scorer for the Illini once again, scoring his 16 points on a 5-of-10 (3-of-5 3FG) shooting clip. He also brought down five rebounds, while adding three assists and a block.

After the game, Miller joined many other opposing coaches in praising the standout player from Illinois, who is also arousing significant interest from NBA scouts.

“Fantastic player, tremendous speed, length and size,” Miller said. “His 3-point shooting has really come on as a freshman and his ability to use ball screens, he just has great size at his position. He’s going to be one of the best players in this league for as long as he stays in it.”

Underwood was able to pick out a few positives on the night and he acknowledged the massive contributions Dosunmu has made to his team in his first campaign as a college basketball player.

“He’s been as good as a freshman as there has been in this league,” Underwood said. “He’s a guy that came in with a big reputation and I think he’s more than lived up to that, in every facet.”

While it’s up for debate whether Langford or Dosunmu will go on to a more successful basketball career — Langford is rated higher — each player has put up an impressive body of work this season.

Langford is sixth in the Big Ten in scoring (first among freshmen), averaging 16.9 points per game.

Miller was proud of Langford’s play, particularly his ability to execute against an Illinois defense that had shut down some of the Big Ten’s more talented players this season.

“He’s strong enough where he puts the guy on his hip and he has a unique ability to stop and start,” Miller said. “He sort of has a little herky-jerkiness to him where he can stop, start and then burst again. I thought he used his dribble wisely tonight, he didn’t pick it up. A big key with Illinois is if you pick your dribble up, that’s when things get really crazy.”

In his second year at the helm, Underwood has been hesitant to assess the year as a whole. But when it comes to individuals, he has rarely held back observations.

“The fun part for me (with Dosunmu) is I’ve seen him improve so much on both ends of the court,” Underwood said. “He’s been spectacular this year.”