Illinois’ season comes to a close after blowout loss to Iowa 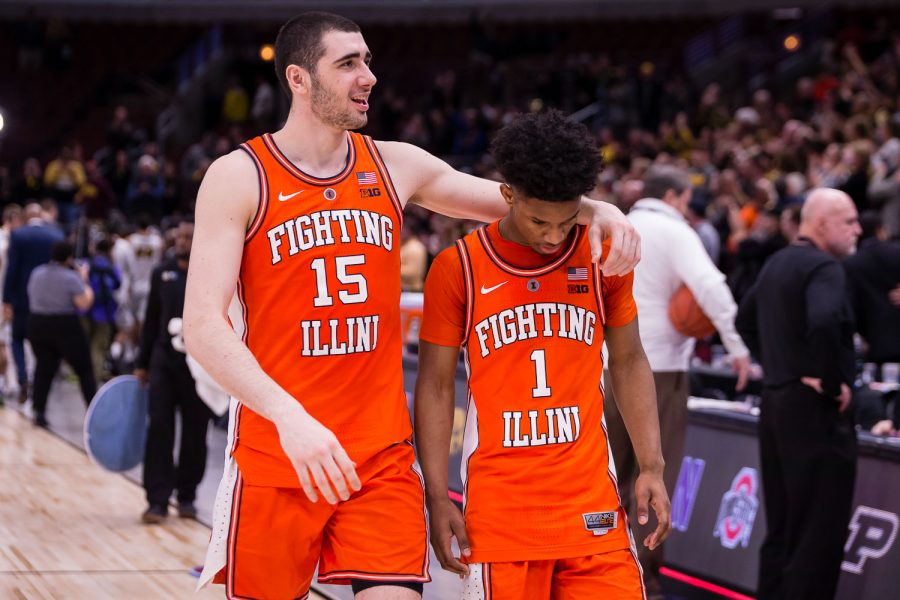 Illinois forward Giorgi Bezhanishvili (left) puts an arm around guard Trent Frazier (right) after the game against Iowa in the second round of the Big Ten Tournament at the United Center on Thursday. The Illini lost 83-62, bringing their season to an end with a 12-21 (7-13 Big Ten) record.

After taking down Northwestern with its season on the line in the first round of the Big Ten Tournament Wednesday night, Illinois came out of the gate with a brutal start on day two.

Illinois started both offensive possessions with two quick shot clock violations at the hands of freshman forward Giorgi Bezhanishvili allowing Iowa to extend its lead, and the fans took notice.

Fortunately for the Illini, an offensive spurt quickly put them right back in the game with an 11-0 scoring run. Tevian Jones checked into the game early after only seeing two minutes of action in Illinois’ matchup against Northwestern and hit two 3-pointers. A three by Da’Monte Williams and a layup by Ayo Dosunmu added to the scoring and knotted the game up early at 10 each.

The Hawkeyes responded with an 11-0 run of their own thanks to two 3-points from forward Nicholas Baer to go up 21-13.

“We are one of the top-20 teams in field goal percentage defense and yet you would never know that when we play Iowa,” said head coach Brad Underwood.

With intensity high, Williams grabbed a steal and passed up the court to Bezhanishvili in transition. While going up for the layup, Iowa guard Connor McCaffery would commit a hard foul and send the big man falling to the floor. An exchange of words quickly took place on the court between McCaffery and Andres Feliz, which lead to both being issued double-technical fouls.

Bezhanishvili would go on to miss both free throws while McCaffery would knock down his. A quick jumper by forward Ryan Kriener several seconds later would give the Hawkeyes a 10-point advantage.

A game of runs would continue.

The Chicago-native Dosunmu began to take advantage of his time in the spotlight. All over Hawkeye guard Jordan Bohannan, Dosunmu would grab the steal and finish the layup for his second straight bucket to extend a 9-0 run and make the score 30-29.

Bohannan stopped the run with a 3-pointer. To end the half, it was all Iowa junior forward Tyler Cook. The veteran player got to the line and hit two free throws before finding his way to the basket again and converting the layup.

“Iowa was terrific tonight and they were the better basketball team tonight,” Underwood said. “They are a tough matchup for us. Tyler Cook poses us some problems.”

A Dosunmu layup to end the half would send the Illini into the locker room down 37-31.

Once again, the strong freshman duo of Bezhanishvili and Dosunmu would carry the team as the two combined for nearly half of the Illini’s first-half points. Trent Frazier got off to a sluggish start — a new trend as of late — shooting only 1-4 from downtown.

When Illinois stepped onto the court to start the second half, Iowa was ready for a takeover.

“They’re just a smart team,” Bezhanishvili said. “When you make a mistake, they make you pay every time.”

The offensive pressure from the Hawkeyes forced the Illini into four straight fouls. The momentum rested in Iowa’s hands, and the team started to take full advantage.

Illinois would hang around the 10-point margin, but eventually off broke a 26-7 scoring run thanks to a strong shooting performance from behind the arc.

It was the same problems that plagued the Illini in their first matchup against the Hawkeyes, where Iowa broke an arena record by shooting 68 percent from the field, including 15 3-pointers on the night. Numerous Hawkeyes players started to splash-in buckets, going 6-10 in the half.

Iowa finished shooting 51.7 percent from the field and 52.2 from 3-point range. While the Illini managed to shoot 52 percent from the field, an 8-24 shooting performance from behind the arc set the team back. Not to mention, Iowa threw up 11 more total shots on the night, partially thanks to Illinois’ 15 turnovers.

“Tonight was an ending,” Underwood said. “This is the beginning of bringing Illinois basketball back … Heading into the offseason with this group is something that excites me a great deal.”