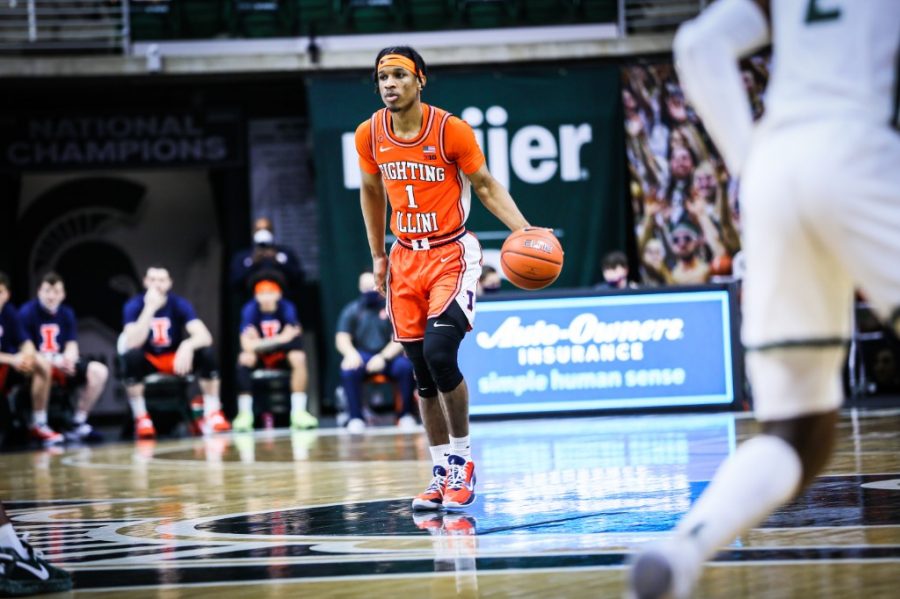 Senior Trent Frazier advances down the court during the game against Michigan State on Sunday. The Illini lost 81-72.

Heading into East Lansing Tuesday night, No. 5 Illinois was riding a seven-game win streak that most recently saw a dominant performance at Minnesota over the weekend. The Illini looked like an entirely different team against the Spartans, coming out flat on both ends of the ball and failing to capitalize on easy opportunities like layups and free throws.

Unusual poor outings from junior Ayo Dosunmu and sophomore Kofi Cockburn limited the Illini’s offense abilities, as Tim Izzo crafted ways to control Illinois’ inside presence. While head coach Brad Underwood was unphased in the postgame press conference, calling the performance just “one of those nights,” the early turnover issues and lack of energy is a concern.

While these were the least fun grades to write this season, let’s take a look at the performances of eight Illini against the Spartans.

Coming off his second triple-double of the season, Dosunmu, like the rest of the Illini, looked sluggish to start the game. In the first half, Dosunmu was just 2-9 from the field, including two missed 3-pointers and had three turnovers. His aggressiveness on the glass, however, helped the Illini outrebound the Spartans in the first half, as Dosunmu had a team-high six rebounds.

While the Chicago native picked up the offensive intensity a little in the second half, scoring 10 points on 4-9 shooting, Dosunmu never found a rhythm worthy of a heroic comeback. The opportunity did present itself, however, as Dosunmu had four free throws, almost back to back, near the end of the second half, but he missed three of them. Making all four would’ve put the Illini within six points with four minutes to play.

While no one knows if those shots would’ve made a difference, it’s still unusual for Dosunmu to miss any chance of doing the unthinkable. Dosunmu finished with a solid 17 points and led the team with nine rebounds, raising his grade a little bit, but the junior guard was still 1-6 from 3-point range and 4-8 from the free-throw line.

While the Illini freshman has been inconsistent all season, Miller struggled to contribute in a positive way on Tuesday night. Playing just 16 minutes, Miller scored only two points on a pair of free throws but went 0-3 from the field. His only other stat was one assist.

Miller struggled everywhere on the court, recording the team’s second-worst plus-minus, as the Illini were -11 when the freshman was in the game. Miller also couldn’t keep up with his defensive assignment — Joshua Langford — who scored 13 points on 55% shooting from field goal range. While the Illini aren’t relying on Miller to make big plays or put up 20 points, they do need him to be disciplined on defense and develop more consistency in his shot.

Frazier was hands down the best Illini player on the court Tuesday. While the rest of his team struggled to consistently create offense, Frazier was hot from all around the court, scoring a game-high 22 points. Frazier shot 53% from the field, knocked down four treys, and most importantly, hit four out of his five free-throw attempts.

He was also aggressive off the ball, grabbing three rebounds (two offensive) and dishing out two assists. While his defense wasn’t as strong as usual, Frazier was able to somewhat contain Rocket Watts, who scored 15 points on 45% shooting.

Frazier has stepped up for the Illini recently, as he’s averaging 15 points and 41% 3-point shooting in the last eight games. Consistency from Frazier, combined with normal nights from Dosunmu and Cockburn, will prove a challenge to any team in the nation.

Tuesday night marked Grandison’s first loss as a starter, as the Illini won seven straight once the junior entered the starting lineup. While Grandison was effective off the ball — recording six rebounds (three offensive) and two assists — he couldn’t get much to fall in the basket, scoring just four points.

Grandison’s defensive intensity, however, was a highlight from the rough night, as he was constantly diving on the floor for the ball and making the hustle plays, something Underwood constantly raves about.

Like Dosunmu, Cockburn had a rare off night, scoring 13 points on 45% shooting while making just three of his 11 free-throw attempts, a pretty inexcusable number. Michigan State’s size proved a challenge for Cockburn from the jump, as he struggled to make layups and dominate the glass.

This was also Cockburn’s second straight game where he didn’t record a double-double, finishing with just six rebounds. The Illini sophomore is typically a walking double-double, as he leads the conference with 15 of them, averaging 17.4 points and 10.1 rebounds per game.

Underwood attributed Cockburn’s low-scoring night to the center’s issues at the free-throw line, which Underwood isn’t too concerned about. However, it wouldn’t be surprising to see Cockburn bounce back quickly, as he usually excels after a rough night.

While Cockburn didn’t do much in the paint against the Spartans, Bezhanishvili did even less, failing to score on three shot attempts and grabbing just four rebounds. Another rarity Illini fans saw on Tuesday night was a lack of energy from Bezhanishvili, particularly early in the first half. The junior got more fired up as the night progressed, but it wasn’t enough to impact the game.

With Cockburn in some early foul trouble, Underwood needed Bezhanishvili to step up as he did against Northwestern. Instead, the Georgia native struggled to get past Michigan State’s strong and big interior of Aaron Henry, Gabe Brown and Joey Hauser.

Curbelo’s start to the game in East Lansing was pretty brutal as he had two turnovers and a missed shot in just six minutes of first-half play. Through those few possessions, Curbelo also looked out of sync on defense, giving up a couple of quick shots.

The Illini freshman turned things around in the second half, scoring 12 points on 5-6 shooting while committing just one turnover. Curbelo helped spark some energy in a lifeless Illini offense while maintaining control of the ball, something he often struggles to do.

While the Illini senior started the season on fire from the 3-point line, Williams has struggled to create anything on offense through the back half of the season. That continued on Tuesday, as Williams didn’t even attempt a shot, hesitating to take a couple of 3-pointers.

Williams did, however, step up on defense, as he grabbed seven rebounds and had one of Illinois’ four steals against the Spartans. It seems like at this point, Williams’ main contribution will stay on the defensive end, as he remains out of the starting lineup in favor of Grandison.