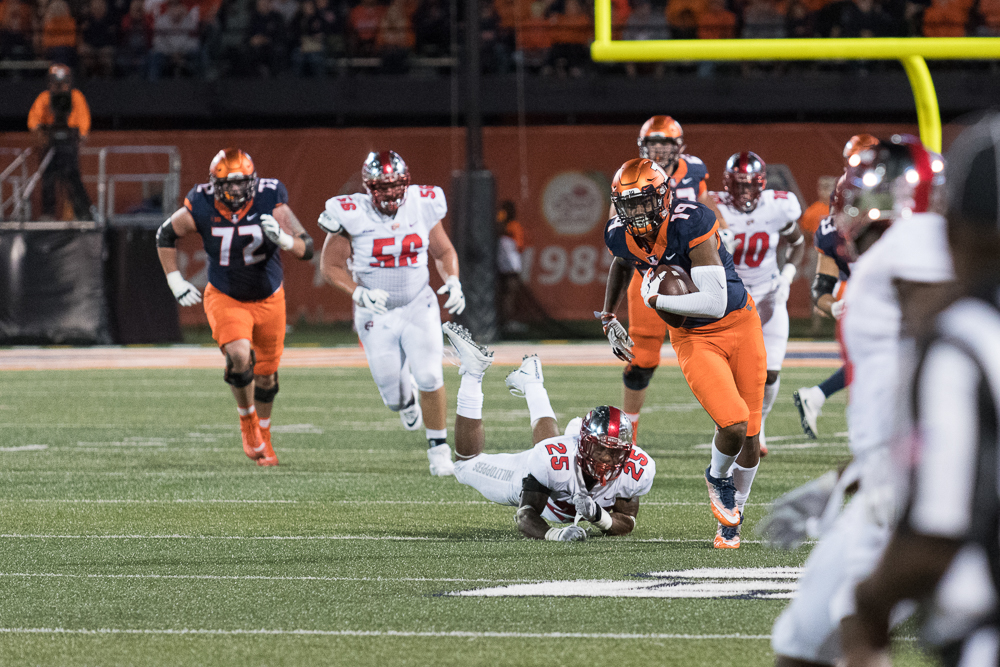 Echard was voted a weekly captain for the team’s opening game against Ball State. The senior played in all 12 games last season and was used as a primary run-blocker.

But Illinois will now have to look elsewhere with Echard’s departure. Smith did not indicate at Monday’s press conference how long Echard will be out.

The injury opened up yet another opportunity for a freshman to make an impact on the 2017 Illinois football team.

Smith started a school-record seven true freshmen in last week’s 20-7 victory over Western Kentucky. Many freshmen on both sides of the ball have contributed this season.

Alex Palczewski and Larry Boyd were two players to start on the offensive line.

Tight end Louis Dorsey may now join them on the line of scrimmage for Friday night’s tilt against South Florida.

Dorsey entered the game for the Illini on Saturday and caught a 20-yard pass from Chayce Crouch in the second quarter.

It was Dorsey’s only catch on the night, but he said he is ready for any opportunity the coaches have for him in the offense.

“I’m very comfortable; that’s why they recruited me to play the position I play,” Dorsey said. “(My connection with Chayce Crouch) has grown a lot since the first game. We’re just improving as a team right now.”

Illinois fans were given a glimpse of Dorsey’s potential play-making abilities in Week One.

The freshman went up high to haul in a one-handed catch near the sidelines against Ball State.

Offensive coordinator Garrick McGee said he knows what type of skills Dorsey can bring to the offense. He said that he is disappointed that Echard will miss time but understands Dorsey is capable of making an immediate impact.

“Louis is a talent. Nate (Echard) is a very experienced guy, one of our captains, a guy that we all trust,” McGee said. “Louis is very savvy, understands football and can really run, jump and catch, so we are really looking forward to getting Louis out there.”

Dorsey said some of his talent came from his high school basketball days at Jean Ribault in Jacksonville, Florida.

“(Basketball) helped me with being athletic and going and catching the ball,” Dorsey said.

Offensive lineman Nick Allegretti said that even with the loss of Echard, he is confident that Dorsey can slide in and give a boost to the line and team.

“I think the line will be fine,” Allegretti said. “Louis is a great player, really young obviously but has a chance to become a really good player.”

Allegretti and Dorsey are set to start in the lineup this weekend against South Florida. Even with Hurricane Irma bashing Tampa, the game is still on for Friday night.