Illini “Quarterback Controversy” is a non-story 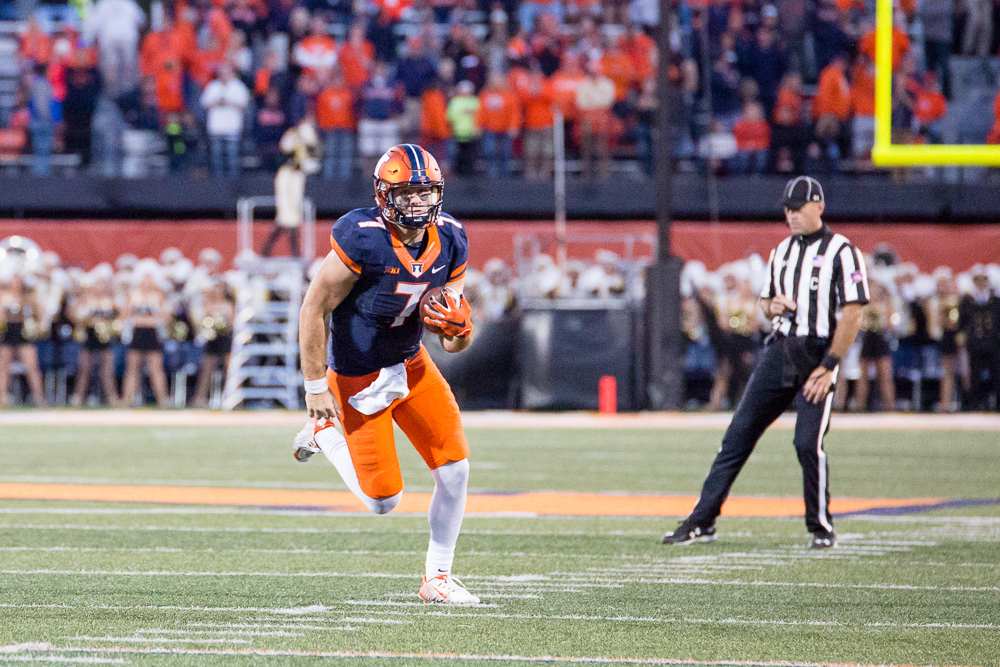 As soon as Lovie Smith subbed Chayce Crouch out late in the game against South Florida, I knew what was coming.

All the signs of a manufactured quarterback controversy were there. The starter hadn’t been playing his best, and the backup was coming in to play a ton of garbage time minutes and would inevitably put up numbers.

Then Jeff George Jr. did just that. He came out and played a solid second half, and all of a sudden the Illini had a full-fledged quarterback controversy on their hands. And it arrived right before the bye week, giving everybody two weeks instead of one to debate who would be a better fit.

But this is a non-story, at least until gameday.

Lovie Smith, as always, has been quiet on the subject. He hasn’t and won’t say who the starting quarterback is until, more than likely, right before the game.

That isn’t because the decision is absolutely perplexing him, though — I firmly believe that Smith and his staff know what they are going to do at quarterback this weekend.  It’s because he wants to keep the incoming Cornhuskers on their toes.

Crouch and George Jr. are extremely different quarterbacks, and the Illini’s style of play changes drastically depending on which one is on the field. Right now, the Cornhuskers are having to prepare for both of them, which is an advantage for the Illini.

Three weeks into the season, the Illini offense has been bad. Barring the success at running back, every position has been underachieving. A change at quarterback won’t change that. George Jr. put up numbers when he took the field last Saturday, but those numbers are skewed due to him playing almost entirely in garbage time.

I have no clue which quarterback would be better. Maybe George Jr.’s arm will help include the Illini’s great wide receiver corps more, or maybe Crouch’s mobility is proving to be more of an asset than we realize, and the problems with the offense are elsewhere. Maybe the Illini would benefit from alternating between the two. It would be a huge tell on what the Illini were planning on doing, but it would allow offensive coordinator Garrick McGee to put together some creative sequences.

Either way, I don’t see the Illinois offense turning around overnight and suddenly being able to score consistently without help from the defense. Crouch has had his problems, and has admitted himself that he can play better, but George Jr. won’t be a Heisman candidate if Crouch ends up starting. I am indifferent on whichever one starts, but I am totally on board for the mind games that Smith is playing out here.

Fans will be annoyed, but so will opposing coaches. This is Smith looking for whatever advantage he can get, and if he has to hide a bit of information about his roster from his fan base in order to do that then he will do so with zero hesitation. Every coach in the nation would.

Taking into account Smith’s history with these decisions, the starting quarterback won’t be announced until Friday night, and even if it is announced earlier, the production of the offense won’t change much.